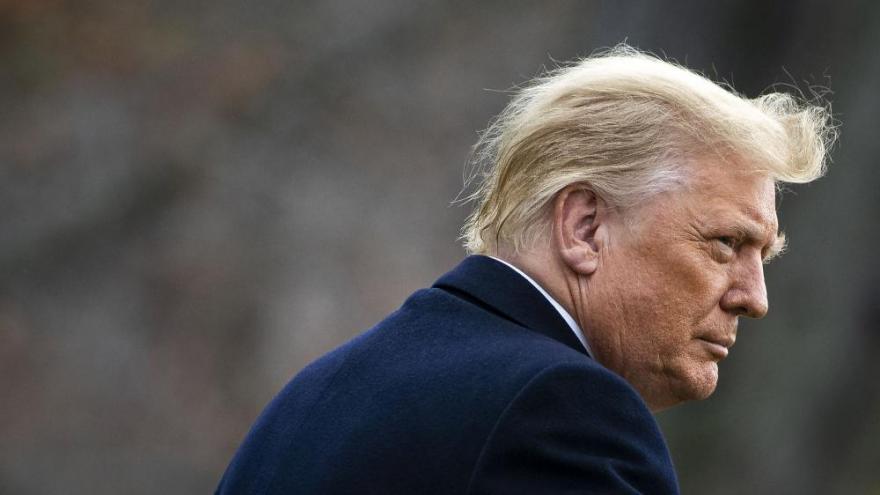 President Donald Trump, here departing the White House, on December 12, 2020 in Washington, DC, is asking for changes to the coronavirus relief bill passed by Congress, leaving the future of the $900 billion stimulus in doubt.

(CNN) -- President Donald Trump on Tuesday said he is asking for changes to the coronavirus relief bill passed by Congress, leaving the future of the $900 billion stimulus in doubt.

Trump's position could threaten to torpedo the carefully drafted bill, which his own administration helped negotiate -- a move that could lead to a government shutdown and send the economy into a tailspin if he carried through with a veto.

"I'm asking Congress to amend this bill and increase the ridiculously low $600 to $2000 or $4000 per couple," Trump said in a video released on Twitter. "I'm also asking Congress to immediately get rid of the wasteful and unnecessary items in this legislation or to send me a suitable bill."

The extraordinary message came after he largely left negotiations over the measure to lawmakers and his Treasury Secretary Steven Mnuchin. Trump did not explicitly threaten to veto the bill, but said he was dissatisfied with its final state.

"A few months ago, Congress started negotiations on a new package to get urgently needed help to the American people. It's taken forever," he said in the video.

"However, the bill they are now planning to send back to my desk is much different than anticipated. It really is a disgrace."

"At last, the President has agreed to $2,000 — Democrats are ready to bring this to the Floor this week by unanimous consent," she said. "Let's do it!"

"Maybe Trump can finally make himself useful and get Republicans not to block it again," he said.

CNN has reached out to the offices of Senate Majority Leader Mitch McConnell and House Minority Leader Kevin McCarthy.

Multiple sources told CNN that the President's message isn't going to prompt a renegotiation of the measure, which passed with big veto-proof majorities.

At the moment, the hope among some on Capitol Hill is that Trump won't veto the bill, since he never explicitly said he would.

House Democrats on Thursday will try to pass a bill to increase direct payments by unanimous consent, though any one member can scuttle that effort. It's unclear what will happen when or if such a bill is blocked.

Government funding runs out next Monday.

Trump's statement was filmed by the White House and was not open to the press. Reporters did not have a chance to ask the President questions. It's unclear when the message was recorded.

The President has in the past said he would sign the bill, and earlier Tuesday the White House publicly defended the bill. But many of his allies have spoken out against the agreement passed.

The White House did not respond to a request for comment.

The legislation includes direct payments of up to $600 per adult, enhanced jobless benefits of $300 per week, roughly $284 billion in Paycheck Protection Program loans, $25 billion in rental assistance, an extension of the eviction moratorium and $82 billion for schools and colleges.

"We can finally report what our nation has needed to hear for a very long time: More help is on the way," Senate Majority Leader Mitch McConnell said Sunday night in announcing the deal.

The deal was reached only after both parties relinquished some of their key demands, with direct stimulus checks proving to be a major sticking point throughout negotiations.

While Trump had told people around him he wanted the direct payments to be much higher, he did not suggest he was unwilling to accept the package containing the $600 amount -- half the $1,200 amount approved in the first relief package, which some lawmakers had been pushing for this time.

When a deal was struck between congressional leaders, Trump's aides signed off believing the President was on board, though two officials said on Tuesday they did not believe he was walked through the package in detail.

In fact, throughout his video message, Trump railed against several provisions that were actually part of the omnibus spending bill, not the Covid relief bill.

"It is called the Covid relief bill, but it has almost nothing to do with Covid," the President said at one point.

While the omnibus spending bill -- which appropriates money for all the federal agencies for the rest of the fiscal year -- was combined with the stimulus deal, funds allocated to the omnibus bill don't mean less is available for the Covid relief bill.

Few advisers knew the President was even taping the five-minute spot from the garland-bedecked Diplomatic Reception Room, in the basement of the residence, and at least one White House official, deputy press secretary Brian Morgenstern, told reporters an hour before the video posted that Trump had signaled his intent to sign it.

After the video posted, aides scrambled to figure out what the President's official position on the legislation was and whether he was actually threatening to veto the legislation.

One official said Trump had been paying little attention to the negotiations surrounding the stimulus in recent days, focused almost exclusively on his futile attempts to overturn the election.

He was not directly involved in the talks, leaving the task to Mnuchin -- who praised the package in a statement Tuesday morning.

Like many of his own aides, Republicans on Capitol Hill were not given a heads up that Trump was going to rail against the stimulus bill. A GOP leadership aide told CNN "no" when asked if this was expected.