Trump threatens to pull Republican convention out of North Carolina 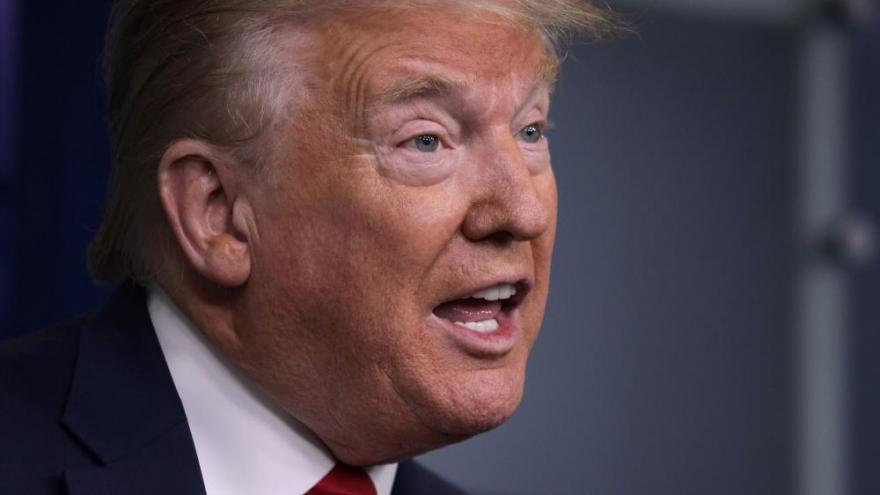 U.S. President Donald Trump makes a statement in the briefing room at the White House on May 22, 2020 in Washington, DC.

(CNN) -- President Donald Trump began a solemn Memorial Day railing against North Carolina Gov. Roy Cooper, a Democrat, ahead of the 2020 Republican National Convention, threatening to pull it out of Charlotte, where the convention is expected to be held August 24 to 27.

Trump contended that Cooper is "unable to guarantee" that the arena can be filled to capacity.

"I love the Great State of North Carolina, so much so that I insisted on having the Republican National Convention in Charlotte at the end of August," Trump said in a series of tweets. "Unfortunately, Democrat Governor, @RoyCooperNC is still in Shutdown mood & unable to guarantee that by August we will be allowed full attendance in the Arena. In other words, we would be spending millions of dollars building the Arena to a very high standard without even knowing if the Democrat Governor would allow the Republican Party to fully occupy the space."

Later Monday afternoon, Trump tweeted that he has "zero interest" in hosting the convention at his Doral resort in Florida, adding that the "(b)allroom is not nearly big enough." The President also said he would like the convention to remain in North Carolina.

The President's calls for a "guarantee" from North Carolina officials overlooks the uncertainty surrounding the summertime levels of the coronavirus and the challenges of hosting a political convention -- or any large event -- in the middle of an ongoing public health crisis.

In an interview last week, Cooper said that data and science will guide his decisions on whether the state can hold large gatherings like the convention. He said the Republican convention, which he supported bringing to Charlotte, will be treated like any other event.

"This is not political. This is not emotional. This is based on health experts, data and science and that's it for everybody to see," Cooper told CNN. "No one is being favored or disfavored over the other."

The Republican convention, where the President will formally accept his party's nomination to a second term, has been on his mind for weeks. He has criticized Cooper for acting too slowly in reopening the state's economy and on Monday demanded an answer about the convention.

"Plans are being made by many thousands of enthusiastic Republicans, and others, to head to beautiful North Carolina in August," Trump said in a tweet. "They must be immediately given an answer by the Governor as to whether or not the space will be allowed to be fully occupied. If not, we will be reluctantly forced to find, with all of the jobs and economic development it brings, another Republican National Convention site. This is not something I want to do."

The tweets completely blindsided party officials and those involved in planning the convention, who have repeatedly argued that health and safety will come first. The officials have insisted planning for the convention is on track.

However, Vice President Mike Pence echoed Trump on Monday, telling Fox News the convention could be moved "if need be" and listing some states that could be alternative locations.

"It's an issue we've been talking about because these national conventions literally take many months to organize and prepare and there are states around the country -- we think of Texas, we think of Florida, Georgia, the last two states I visited last week that have made tremendous progress on reopening their communities and reopening their economies," Pence said.

"We all want to be in Charlotte, we love North Carolina, but having a sense now is absolutely essential because of the rules and regulations that are involved, and we look forward to working with Gov. Cooper, getting a swift response, and, if need be, moving the national convention to a state that is farther along on reopening and can say with confidence that we can gather there," he said.

A Trump campaign official referred CNN to the President's tweets and vice president's comments on the topic, declining to respond to CNN's inquiry on whether the campaign got a heads-up that Trump's tweets were coming.

Cooper, who is also up for reelection in November, has taken a slower and more measured approach in reopening businesses than Republican governors in neighboring states. On Friday evening, he began allowing restaurants, barber shops and salons to open with limitations, while gyms, bars and movie theaters will remain closed.

Both Cooper and the Democratic mayor of Charlotte, Vi Lyles, said their recommendations and decisions about the convention will be guided by science, not politics. Business owners see the convention as a potential lifeline after more than two months of economic disaster.

The Republican convention, which is scheduled to be held in the same uptown arena where President Barack Obama accepted his nomination to a second term in 2012, is awash in uncertainty as party officials determine how to navigate a presidential campaign during a public health crisis.

Cooper said the Republican gathering would be treated like any other major event and it remained unclear whether concerts or the NFL would return this summer and fall. Crowds are still limited to 10 people, under the governor's order, with additional phases of reopening still to come.

A spokeswoman for the governor, Dory MacMillan, said in a statement on Monday that state officials were working with the Republican National Committee "and will review its plans as they make decisions about how to hold the convention in Charlotte."

Republican National Committee Chairwoman Ronna McDaniel told reporters the RNC, Trump campaign, and host committee are moving "full steam ahead" in convention planning, but will assess in late June or early July as to whether contingencies need to be made due to the coronavirus.

"We do not think at this time we have to switch to an alternative plan, but of course, we will monitor circumstances and adjust accordingly," she said on a briefing call. McDaniel also said, "We will not be holding a virtual convention."

It remains unclear what an adjusted GOP convention could look like and how social distancing guidelines will be observed in the coming months. A "traditional convention" typically consists of thousands of supporters packed into an arena, including key party officials, during the formal nomination process.

Trump's tweets come amid criticism for his weekend spent golfing at his club in Virginia and hours before he was set to commemorate the Memorial Day holiday by participating in a wreath laying at Arlington National Cemetery and a ceremony at Fort McHenry in Baltimore.