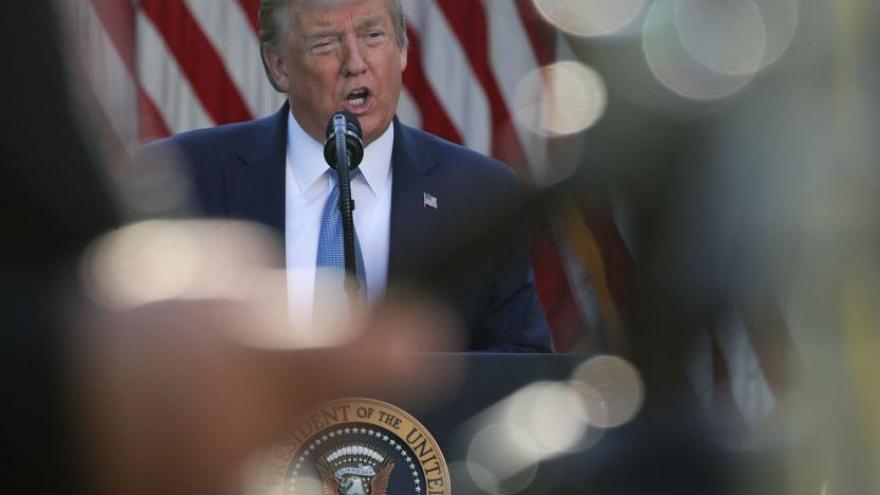 President Donald Trump threatened Wednesday to apply a never-used provision of the US Constitution to allow himself to adjourn the US Congress and push through many of his nominees who typically require Senate confirmation.

(CNN) -- President Donald Trump threatened Wednesday to apply a never-used provision of the US Constitution to allow himself to adjourn the US Congress and push through many of his nominees who typically require Senate confirmation. The move came days after he claimed that he has total authority over the states before backing down.

"As the entire US government works to combat the global pandemic, it is absolutely essential that key positions at relevant federal agencies are fully staffed, and we're not allowing that to take place through our Congress," Trump told reporters in the Rose Garden during his daily coronavirus briefing. "They're just not giving it to us. We have many positions that are unstaffed because we can't get approval."

Trump said there were 129 nominees "stuck in the Senate because of partisan obstruction."

Trump's argument seemed to be that many of these vacancies needed to be filled to assist with the coronavirus response, including the director of national intelligence, two members of the Federal Reserve Board of Governors, an assistant secretary of the Treasury Department and an undersecretary of agriculture.

The President argued that since the Senate has left until May 4, he must use his constitutional authority to adjourn it.

"The Constitution provides a mechanism for the President to fill positions in such circumstances. The recess appointment, it's called. The Senate's practice of gaveling into so-called pro-forma sessions, where no one is even there, has prevented me from using the constitutional authority we're given," he said, calling on the Senate to adjourn itself.

The decision to stay away from Washington until May 4 was made, and announced, by Senate Majority Leader Mitch McConnell, a Kentucky Republican and close Trump ally.

A McConnell spokesman said Trump and McConnell spoke about the issue on Wednesday: "The Leader pledged to find ways to confirm nominees considered mission-critical to the Covid-19 pandemic, but under Senate rules that will take consent from Leader (Chuck) Schumer."

That last point is an important one. McConnell, who is careful with his words, appears to be saying any solution to the confirmation issue will require Democratic consent.

The Constitution allows a president to fill temporary appointments during a recess, without congressional approval. But lawmakers in both parties have sought to thwart certain appointments over the last decade by never technically shutting down the Senate.

When then-President Barack Obama attempted to make recess appointments during pro-forma sessions in 2014, the US Supreme Court ruled "that the Recess Appointment Clause does not give the President the constitutional authority to make the appointments here at issue."

However, on Wednesday, Trump said he may use powers granted to the executive branch in order to get Congress to return to Washington to fill vacancies and vote on relief aid.

"I have a very strong power. I'd rather not use that power but we have way over a hundred people that we very badly need in this administration that should have been approved a long time ago," he said.

The Constitution says the President "may, on extraordinary Occasions, convene both Houses, or either of them, and in Case of Disagreement between them, with Respect to the Time of Adjournment, he may adjourn them to such Time as he shall think proper."

Given that the authority has never been invoked before, it's murky as to what would define "disagreement" in this case. Both chambers would technically need to adjourn to clear the way for recess appointments, and the Democratic-led House is exceedingly unlikely to hold a vote to adjourn.

That means McConnell would likely have to bring senators back to Washington to vote to adjourn in order to create the "disagreement" cited in the Constitution that would provide the grounds for Trump to act. The Senate, like the House, is out of Washington due to concern over the safety of lawmakers amid the pandemic.

Trump, as he sought to explain his consideration of the action, took special note of Michael Pack, the President's choice to lead the Broadcasting Board of Governors, whose organization doesn't hold a clear role in the federal government's coronavirus health or economic response.

Trump cited Pack's stalled nomination to head the board of Voice of America as a particular grievance, and went on to attack the news organization.

Trump did not explain how the nominee to be CEO of the US Agency for Global Media would enhance federal efforts to counter the pandemic.

But he reiterated his threat to adjourn both chambers of Congress several times.

"If they don't approve it, we're gonna go this route," Trump said. "We are going to do something that will be something I prefer not doing."