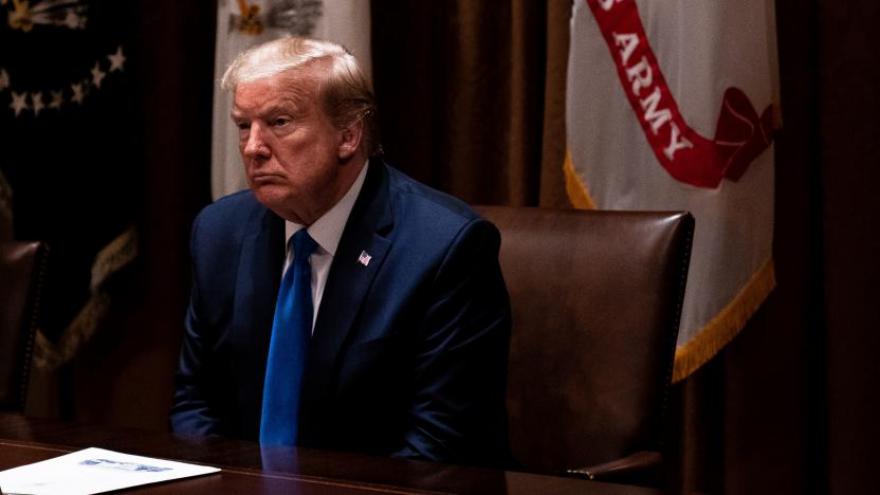 President Donald Trump participates in a meeting with Senior Military Leadership and the National Security Team in the Cabinet Room of the White House in Washington DC, May 9th, 2020.

(CNN) -- President Donald Trump on Wednesday threatened to "strongly regulate" or even shut down social media platforms after Twitter applied a fact-check to two of his tweets this week.

He's expected to sign an executive order pertaining to social media Thursday, but it is still unclear what the substance of the order may contain.

Trump's threats on Wednesday are the clearest expression of intent to use the power of government to target his perceived political enemies in the private sector -- businesses that already enjoy wide latitude under the law to moderate their platforms as they see fit. And it raises the stakes for Twitter and Facebook as they grapple with Trump's misleading claims about mail-in voting and his baseless insinuations that a cable TV news host had a hand in an aide's death decades ago.

"Republicans feel that Social Media Platforms totally silence conservatives voices. We will strongly regulate, or close them down, before we can ever allow this to happen," Trump tweeted Wednesday. He went on to accuse the tech industry of trying to interfere in the 2016 election, before repeating an unfounded claim about voter fraud stemming from mail-in ballots.

"We can't let large scale Mail-In Ballots take root in our Country," Trump tweeted. "It would be a free for all on cheating, forgery and the theft of Ballots. Whoever cheated the most would win. Likewise, Social Media. Clean up your act, NOW!!!!"

The White House did not consult the Federal Communications Commission on the forthcoming executive order, according to a person briefed on the matter.

The pending executive order was hastily conceived at the last minute, the person said.

The FCC has so far resisted White House efforts to involve the agency in policing social media. Agency officials privately pushed back against an earlier draft White House executive order that would have effectively appointed the FCC and Federal Trade Commission as overseers of political speech on social media platforms.

It was not immediately clear if the FTC had been consulted on the executive order teased this week.

Because the FCC was not informed, it suggests the draft order has not gone through the typical interagency review process, implying that the Justice Department and FTC may have been caught off-guard as well.

Trump's Twitter outburst followed an unprecedented decision by the platform on Tuesday evening to apply a fact-checking label to Trump's content for the first time.

The label, which Twitter has designed to combat misinformation and unverified claims, linked to a curated page with links and summaries of articles describing how Trump's claims on mail-in ballots are unfounded.

Shortly after the labels were applied, Trump took to Twitter to claim the company "is interfering in the 2020 Presidential Election" and "stifling FREE SPEECH." He added that he "will not allow it to happen!"

But Twitter's fact-checking decision raised further questions about whether it would apply the same treatment to Trump's misleading claims about Lori Klausutis, the aide to former Rep. Joe Scarborough, a prominent critic of Trump. In recent days, Trump has leveled unsubstantiated allegations at Scarborough suggesting he was responsible for Klausutis's death. The claims have been undermined by the official autopsy, which found Klausutis had an undiagnosed heart condition. Klausutis's husband, Timothy Klausutis, reiterated that in a letter to Twitter CEO Jack Dorsey last week, saying that Trump's claims denigrated the memory of his wife for perceived political gain.

Twitter has told CNN Business that it will not be removing the tweets about Scarborough.

The most "obvious" course of action, according to Andrew Schwartzman of the Benton Institute for Broadband and Society, would be for Trump to seek changes to the Communications Decency Act, which shields tech platforms from legal liability for a wide range of online content.

There has been an ongoing push, led by the Justice Department and Republicans in Congress, to do just that. Changing the law would require building broad consensus in a deadlocked Congress. The Trump administration could not go it alone. A new law that specifies how tech companies must police their platforms could raise questions about the law's constitutionality.

On Wednesday, FCC member Jessica Rosenworcel, a Democratic-affiliated commissioner on the five-member commission, appeared to allude to that when she tweeted the text of the First Amendment.

Trump could pressure agencies such as the FCC and the FTC to take action against social media companies. But the agencies have previously resisted efforts by the White House to transform them into arbiters of political speech, and experts say the FCC lacks jurisdiction anyway over Twitter and Facebook.

Privately, officials from the FCC and FTC have expressed concerns about a prior proposal from the White House to appoint those agencies as direct regulators of political content on social media.

Meanwhile, major tech industry players remain under federal and state antitrust investigation. But antitrust probes tend to be highly technical and are usually limited to the impact of corporate conduct on competition in the marketplace.

"This is just another example of Trump thinking that the Constitution makes him a king, but it doesn't," he said.

Trump and conservatives have long complained that tech platforms algorithmically censor right-wing voices. The claims derive from a perception that Silicon Valley's largely left-leaning workforce has designed social media products to discriminate against conservatives, though the companies strongly deny the allegations.

Some executives, like Facebook CEO Mark Zuckerberg, have sought to accommodate conservative voices by meeting with them privately, and even meeting with Trump himself.

Trump has previously suggested that the US government could take action against media he dislikes. Last year, the White House set up a website to solicit complaints from the public about tech companies' perceived political bias, and Trump has called for an examination of NBC's television license, even though it does not have one.

Earlier this month, Trump tweeted: "The Radical Left is in total command & control of Facebook, Instagram, Twitter and Google," and promised, without specifics, that his administration would "remedy this illegal situation." Following that tweet, The Wall Street Journal reported that Trump has considered establishing a White House commission to study allegations of conservative bias.