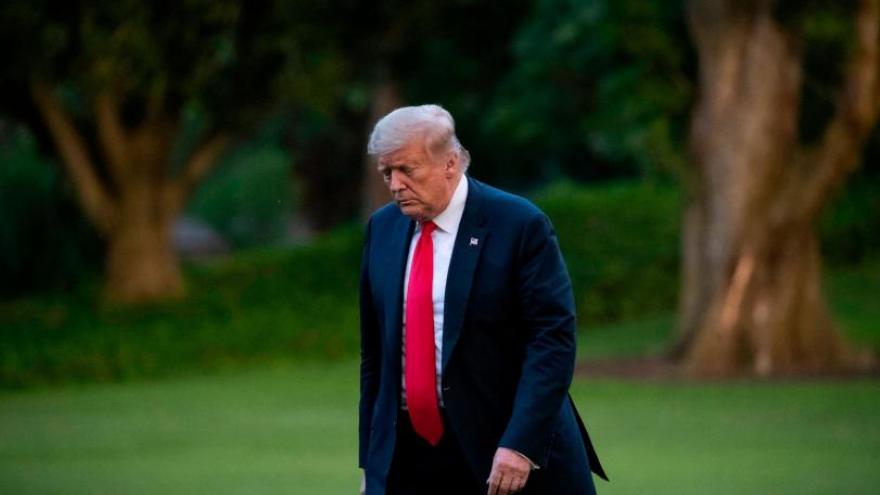 President Donald Trump on Sunday widely shared a video he said is from the Villages, a community in Florida, in which a man driving a golf cart with Trump campaign posters is seen chanting "white power."

(CNN) -- President Donald Trump on Sunday morning widely shared a video he said is from the Villages, a retirement community in Florida, in which a man driving a golf cart with Trump campaign posters is seen chanting "white power."

The President retweeted the video that showed the community's Trump supporters and anti-Trump protesters arguing with one another. The President thanked the "great people" shown in the video.

"Thank you to the great people of The Villages. The Radical Left Do Nothing Democrats will Fall in the Fall. Corrupt Joe is shot. See you soon!!" he wrote in the tweet. Roughly three hours later, the tweet no longer appeared in Trump's timeline.

"President Trump is a big fan of the Villages. He did not hear the one statement made on the video. What he did see was tremendous enthusiasm from his many supporters," White House deputy press secretary Judd Deere said in a statement.

Before the tweet was deleted, South Carolina Sen. Tim Scott, the only Black senator in the Republican conference, said on Sunday that the video retweeted by the President was offensive and "indefensible."

"There's no question. He should not have retweeted and he should just take it down," Scott said on CNN's "State of the Union" with Jake Tapper.

US Secretary of Health and Human Services Alex Azar told Tapper he hadn't seen the video, which was played on the same news program, or the President's tweet, "but obviously neither the President, his administration nor I would do anything to be supportive of white supremacy or anything that would support discrimination of any kind."

Azar declined to comment further when Tapper asked if it was a mistake by the President. "But obviously the President and I and his whole administration would stand against any acts of white supremacy."

Former national security adviser John Bolton told Tapper on "State of the Union" that it's possible that Trump tweeted the video because he saw a "Trump 2020" sign and had not paid attention.

"It may be that you can draw a conclusion that he heard it, and it was racist, and he tweeted it to promote the message. It is a legitimate conclusion to draw. It is also entirely legitimate to say he just had no idea what else was in the video other than the Trump sign," Bolton said.

"This president tries to claim ignorance, but the consistency of his actions -- on Charlottesville and most recently Lafayette Square -- drown out his vacuous words," Perez said in a statement.

The video Trump had retweeted, and then was deleted, appears to be from a June 14 parade organized by the Villagers for Trump. In the video, the anti-Trump protesters are seen and heard angrily shouting profanities at the Trump supporters.

David Gee, the founder of the Villagers for Trump, told CNN on Sunday that the man who chanted "white power" is not a member of the group and he does not know who he is.

"Would I condone somebody within our organization to talk about white power? I absolutely would not. I would absolutely condemn that," Gee said.

He added that "As the head of our organization, I absolutely run our organization as a quasi-Christian type of a club and the Bible does not discriminate. My bible tells me that God loves everybody."

The message was echoed by John Calandro, who coordinates media for the group.

"No one apparently knows who the individual was," Calandro told CNN, adding, "This was an unfortunate incident. This is not indicative of the people who live here."

The president of the Villages' Democratic Club, Chris Stanley, told CNN that her club had not organized a counter-rally that day, but that the run-in was from some members being in the area for another rally.

Trump has stoked racial tensions in the US throughout his presidency and has recently used race-baiting rhetoric as he seeks to fire up his base to win a second term in office.

Trump often denies his language is racist or inflammatory and dismisses criticism of such rhetoric as political correctness. He also has long denied being racist and claims that he's done more for the Black community than any other president.

Trump used a racist term, the "kung flu," to describe the coronavirus at his recent Tulsa, Oklahoma, rally.

Amid nationwide protests over racial injustice and police brutality this month, the President has retrenched into divisive themes instead of seeking a unifying tone.

He has opposed changing the names of certain bases honoring Confederate commanders and he and his administration have taken steps to protect national monuments as some protesters have attempted to tear down Confederate statues themselves.

Last week, Trump tweeted seemingly random videos portraying White people being assaulted by Black people, asking in one, "Where are the protesters?" He warned protesters in Minneapolis that "when the looting starts, the shooting starts," a phrase that originated in the 1960s with a Miami police chief accused of racism.

Trump's 2020 rival, the presumptive Democratic nominee Joe Biden compared Trump's tweet Sunday to his 2017 comments blaming "both sides" for violence between white nationalists and counter-protesters at a rally in Charlottesville, Virginia. "We're in a battle for the soul of the nation — and the President has picked a side. But make no mistake: it's a battle we will win," Biden said.