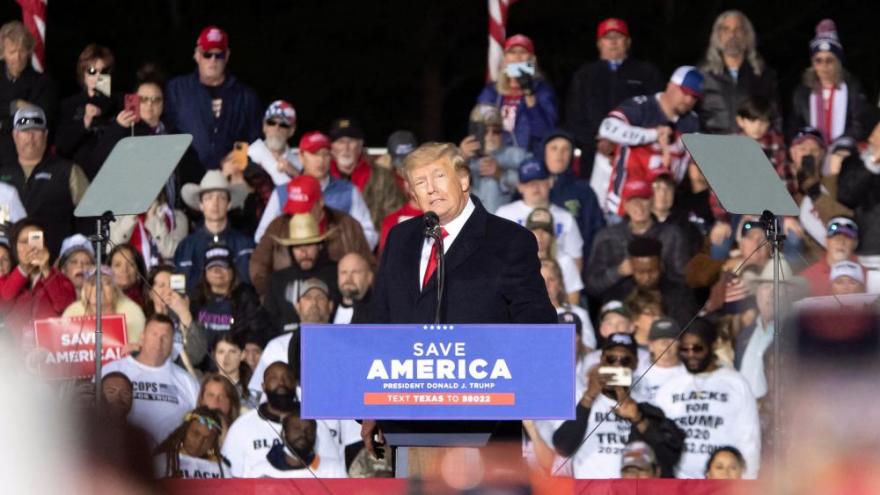 Former President Donald Trump speaks during a "Save America" rally in Conroe, Texas on January 29.

(CNN) -- Former President Donald Trump on Saturday teased a 2024 presidential candidacy and said he would consider pardoning those who were charged in connection with the deadly January 6, 2021, attack on the US Capitol if he wins the White House again.

Trump's comments came during a campaign-style rally in Texas in which he complained about the criminal prosecutions that Capitol rioters have faced as a result of their attempt to interrupt the counting of Electoral College votes after he lost the 2020 election. He said the rioters are being treated "so unfairly."

"If I run and if I win, we will treat those people from January 6 fairly. We will treat them fairly," Trump said. "And if it requires pardons, we will give them pardons. Because they are being treated so unfairly."

His comments reflect the growing sentiment among Republicans that the Capitol rioters should be forgiven and the events of that day forgotten -- as the House select committee investigating January 6 has issued scores of subpoenas to individuals and organizations as part of its probe and is expected to release an interim report on its findings this summer. Some of Trump's allies in Congress have pleaded for pardons for rioters. Florida Gov. Ron DeSantis, a potential 2024 Republican presidential contender, recently called one-year commemorations of the Capitol riot an effort to "smear" Trump's supporters.

The Department of Justice has charged more than 700 in connection with the attack on the Capitol.

Trump raised the prospect of pardons after a speech repeating his lies about widespread voter fraud causing his loss to President Joe Biden in 2020. Republicans in statehouses across the country have seized on Trump's lies to enact new laws that would make voting more difficult for some, and to pursue ongoing reviews of the 2020 election results.

Trump did not explicitly say he will run for president in 2024. Doing so would trigger a series of legal and campaign finance requirements.

Trump also used the speech to rail against New York prosecutors' investigations into his business empire, calling for "the biggest protests we have ever had" if the prosecutors "do anything wrong or illegal."

New York Attorney General Letitia James earlier this month laid out details of what her office believes to be "misleading or fraudulent" financial statements. And Manhattan district attorney Alvin Bragg Jr. has vowed to personally focus on a probe into Trump's business practices. Both prosecutors -- who Trump called "racists" -- are Black, and neither has faced credible accusations of misconduct.

"These prosecutors are vicious, horrible people. They're racists and they're very sick -- they're mentally sick," he said. "They're going after me without any protection of my rights from the Supreme Court or most other courts. In reality, they're not after me, they're after you."