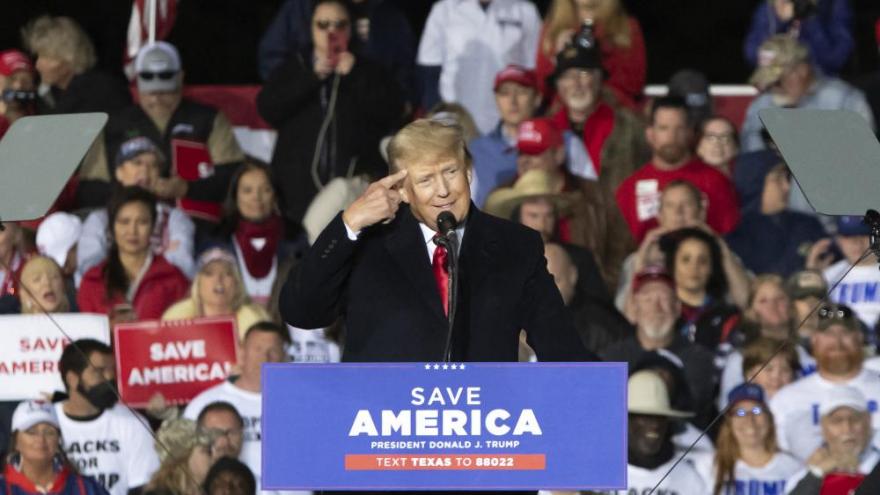 Former US President Donald Trump gestures as he speaks during a "Save America" rally in Conroe, Texas on January 29, 2022.

(CNN) -- Former President Donald Trump's political organization has amassed $122 million in cash reserves, his team announced Monday. The war chest he has stockpiled is unprecedented for a former President and underscores his financial dominance in Republican politics more than a year after leaving the White House and during a critical midterm cycle.

Trump's various political arms raised more than $51 million during the second half of the year, according to a statement from Trump's Save America political action committee, which also claimed that he has contributed more than $1.35 million to his favored candidates and causes.

"President Donald J. Trump has built a political organization that continues to capture and define the future of the Republican Party," his spokesman Taylor Budowich said in the statement. "There is no question that the MAKE AMERICA GREAT AGAIN (MAGA!) wave is set to crash across the Midterms and carry forward all the way through 2024."

Trump's leadership committee, Save America, gave a combined $205,000 to dozens of candidates endorsed by the former President between July and December of last year, according to its most recent fundraising report filed Monday. The recipients of Trump's contributions ranged from incumbents like Republican Sens. Marco Rubio of Florida, Rand Paul of Kentucky and John Kennedy of Louisiana to insurgent GOP challengers like Harriet Hageman, who is running against Rep. Liz Cheney in Wyoming and received a $5,000 contribution from Save America in December.

Save America also donated $1 million in July to the Conservative Partnership Institute, where his former chief of staff Mark Meadows is a senior partner, the new filings show. The donation -- which came after the formation of the House select committee investigating the January 6 Capitol Hill riot -- is the largest contribution the PAC made during the six-month period covered by the filing.

Trump's super PAC, "Make America Great Again, Again!," only spent $476,577 between October and the end of 2021, according to the filing. (The super PAC was rebranded from its previous iteration, the Make America Great Again political action committee, in October.) The bulk of that money went toward operational costs, polling conducted by longtime Trump pollster Tony Fabrizio and several Trump allies who have contractual agreements with the group, including former Florida Attorney General Pam Bondi and former US Ambassador to Germany Ric Grenell.

Fueled by larger donations from a smaller number of donors, MAGA, Again! kicked off 2022 with about $9.5 million in its coffers, following a $4.3 million fundraising haul in the final three months of 2021.

How Trump is spending money

Though the former President began doling out endorsements -- including to insurgent GOP candidates who are challenging incumbent Republicans -- as early as last February, he did not begin spending heavily on candidates and their causes did not begin until the second half of 2021.

As the midterm cycle dheats up, Trump aides expect him to put his war chest to use on advertisements for candidates he has endorsed and to cover the costs associated with his mega rallies, of which he has held two so far this year -- in Arizona and Texas.

A notable amount of Trump's spending so far appears to have been pocketed by various aides and allies who remain in his orbit. Before its rebranding, the Make America Great Again PAC, for example, paid top Trump campaign attorney Alex Cannon $30,000 just in the month of July. Another aide, Sean Dollman, was paid $130,000 from the same committee between July and December. Meanwhile, Trump's Save America PAC handed out year-end bonuses to some of its employees and paid the salaries of a small contingent of young aides who remain at his side at Mar-a-Lago.

Then there is the spending on attorneys' fees and legal consulting. In the last six months of 2021, Trump's post-presidency super PAC spent more than $1.7 million on legal expenses, according to a CNN review of the group's latest FEC report.

Since leaving office, Trump has built a network of campaign committees, including his primary fundraising vehicle, the Save America leadership committee, and Make America Great Again, Again!, which is run by longtime Trump ally and former Florida attorney general Pam Bondi.

Save America entered 2022 with $105 million cash on hand. A significant portion of its funds appear to have been spent on advertisements on Facebook, which has suspended Trump's account on its platform through next January at least. From June through December, Facebook ad spending ranged from $2 to more than $16,000 in a single day.

Earlier in the day, Trump's MAGA, Again! super PAC filed a report with the federal regulators showing that it has raised around $10 million during the final quarter of 2021. That haul included a $5.725 million transfer from MAGA Action, a now-defunct super PAC that had been run by Trump's former campaign manager Corey Lewandowski.

The committee spent $476,577 during the same period, the bulk of which went toward operational costs and polling conducted by former Trump campaign pollster Tony Fabrizio. Its spending also included a combined $12,000 in event, catering, and transportation fees at Trump's Mar-a-Lago estate and golf club in Palm Beach, Florida.

The cash position touted by Trump's team Monday far exceeds the cash reserves of the Republican National Committee, which reported starting this year with $56.3 million remaining in the bank.

The RNC has helped underwrite some of the former President's legal bills in recent months.