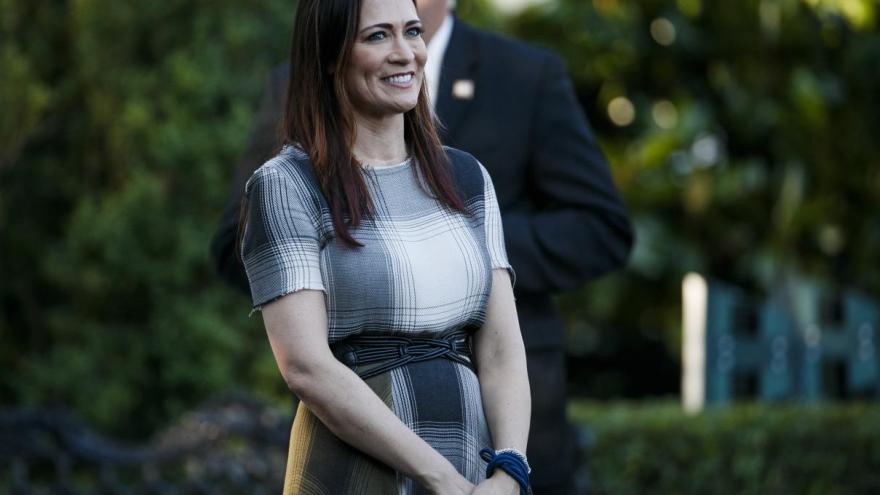 "I am pleased to announce @StephGrisham45 will be the next @PressSec & Comms Director! She has been with us since 2015 - @POTUS & I can think of no better person to serve the Administration & our country. Excited to have Stephanie working for both sides of the @WhiteHouse. #BeBest" Melania Trump tweeted.

President Donald Trump didn't look far for his next press secretary in Grisham, who for the past two years has been the communications director for the first lady. Grisham will keep her current job too.

However, Trump has tweaked the job duties before handing the reins to Grisham, whose purview will include a larger scope of responsibility than that of her predecessor Sarah Sanders, and one as yet unprecedented in this administration. Trump has appointed Grisham both White House director of communications as well as press secretary, a senior White House official tells CNN. Grisham will be assuming the roles formerly held by Bill Shine, who departed as White House communications director in March, and Sanders, who has said her last day will be this Friday.

Additionally, Grisham will remain in charge of communications for the East Wing in addition to her new West Wing responsibilities, staying on as the spokeswoman for the first lady, says the official.

Grisham will be accompanying the President in her new capacity on his trip to Japan and Korea this week.

But this source said Grisham was Trump's clear choice from the beginning. Trump wanted somebody from his inner circle, according to the source. Gidley was never seriously considered by Trump, the source said despite Sanders' attempts to pick her own successor.

Trump "is going with the team he trusts," the source said.

Grisham was at Camp David this weekend with Trump, two people familiar with the matter said.

She didn't depart with the President on Saturday morning but joined the small group of aides — which included Dan Scavino and later acting Chief of Staff Mick Mulvaney — later in the day at the mountainside retreat.

Grisham met with Sanders at the White House on Tuesday afternoon following the announcement of her promotion. Several reporters were gathered outside Sanders' office door, to which Sanders told Grisham to "get used to it."

One of the earliest members of Trump's team

Grisham has been with team Trump longer than anyone currently in the White House, with the exception of Scavino, both of whom started on the Trump campaign in 2015. Prior to that, Grisham worked as a spokeswoman and communications operative, mostly in Republican politics, in her home state of Arizona; in 2012, she briefly worked on Mitt Romney's presidential campaign. Before joining Trump's campaign, she was operating her own public relations and communications company in Arizona, but decided to commit to the role of traveling press director after assisting with a July 2015 rally in Phoenix by then-candidate Trump.

Once part of the campaign, Grisham wrangled media as Trump canvassed the country. After Trump took office, Grisham served as deputy press secretary in the West Wing during Sean Spicer's tenure.

However, Grisham soon caught the eye of first lady Melania Trump, who was impressed by Grisham's assistance during the first visit of Japan Prime Minister Shinzo Abe and his wife Akie Abe to Mar-a-Lago in Palm Beach, Florida, in February 2017. By the end of March, Grisham had made the move to the East Wing.

During her time with the first lady, Grisham has handled much of the responsibility of the first lady's forward-facing presence where she's made a name for herself as a dogged, if caustic, defender.

Dubbed "the enforcer" in a 2018 Washington Post profile, Grisham's job is to thwart as much as possible the criticism levied at the first lady on topics that have ranged from picking cyberbullying as part of her platform to Trump's need for privacy during a secretive kidney operation last April. Grisham has also helmed PR on the seemingly opposing views of the first lady to those of the President and navigated Melania Trump's silence in the face of headlines about Trump's alleged infidelities, which he denies.

During the Stormy Daniels scandal, as a silent first lady made few public appearances, Grisham fired off a tweet scolding rampant stories about the first couple's marriage.

"While I know the media is enjoying speculation & salacious gossip, I'd like to remind people there's a minor child who's name should be kept out of news stories when at all possible," tweeted Grisham.

But it was Grisham's participation in one of Melania Trump's biggest power plays that got the most attention. As sparring with East Wing staff escalated after fallout from a tiff during the first lady's first solo trip to Africa, Grisham released a statement calling for the firing of Mira Ricardel, a longtime government official and Trump's deputy national security adviser.

Ricardel, who was not particularly well-liked according to those who worked with her, and Grisham, had butted heads during the Africa trip, and Ricardel had not forgotten it, making it a mission to continue the feud back home in the weeks that followed. After flagging Ricardel's behavior to the West Wing, to no avail, the first lady consented to Grisham releasing a statement that read: "It is the position of the Office of the First Lady that she no longer deserves the honor of serving in this White House."

Within two days, Ricardel had been dismissed from the White House by the President and Melania Trump had staked claim that she and her staff are not to be tangled with.