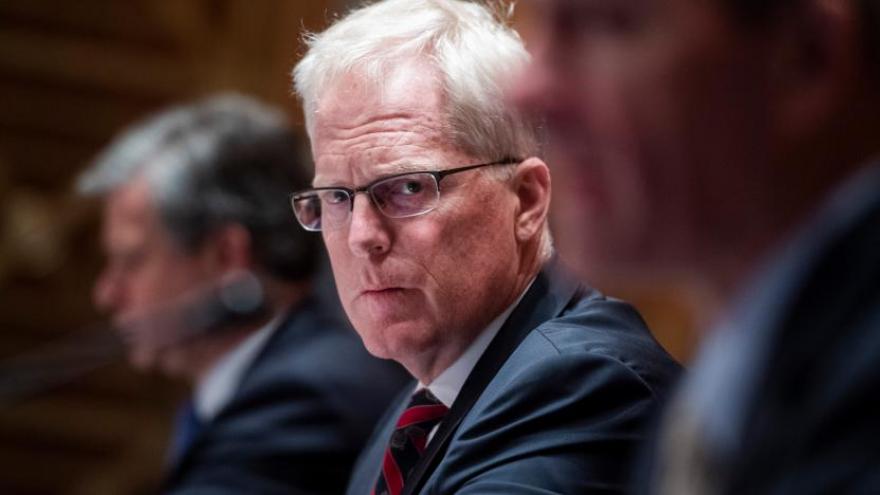 Donald Trump tapped Christopher Miller, the director of the National Counterterrorism Center, to lead the Pentagon for what will likely be the remainder of his administration. In this image, Miller testifies during the Senate Homeland Security and Governmental Affairs Committee hearing on September 24, 2020 in Washington, DC.

(CNN) -- After firing his second Senate-confirmed secretary of defense, President Donald Trump tapped Christopher Miller, the director of the National Counterterrorism Center, to lead the Pentagon for what will likely be the remainder of his administration.

The President jettisoned Mark Esper two days after his Democratic opponent Joe Biden was projected as the winner of the presidential election, a conclusion that Trump has refused to accept.

Miller is a former decorated Army Special Forces officer and Pentagon official with a deep background in counterterrorism and special operations.

Soon after arriving at the Pentagon Monday, Miller met with the Chairman of the Joint Chiefs of Staff Gen. Mark Milley and other top staff to give them his initial guidance and to not expect "significant changes at this time," a senior defense official told CNN.

The official said Miller is spending his initial hours at the Pentagon receiving critical briefings on issues such as the nuclear codes and military operations around the world.

Miller has already spoken to the chairman of the Senate Armed Services Committee, Republican Sen. Jim Inhofe, according to a statement from the senator that said he was looking forward so working with Miller to help "maintain stability at the Pentagon."

Miller became the director of the National Counterterrorism Center in August following a bipartisan confirmation vote in the Senate, a vote Trump touted when naming him as the acting head of the Pentagon, bypassing the deputy secretary of defense who would normally take over on an acting capacity should the defense secretary be fired.

Prior to leaving the NCTC, Miller was working at the Pentagon as the deputy assistant secretary of defense for special operations and combating terrorism.

Before his most recent tour at the Pentagon, Miller was working in the Trump White House, serving from 2018-2019 as the as the special assistant to the President and senior director for counterterrorism and transnational threats at the National Security Council.

Officials say Miller was a driving force in some of the President's anti-Iran and anti-Hezbollah policies, as well as counterterrorism efforts linked to the wars in Syria and Iraq.

Multiple US officials told CNN that when Trump announced his intention in 2018 to withdraw abruptly from Syria prior to the defeat of ISIS, Miller privately expressed his concern about the decision, noting that deserting the Kurdish-led Syrian Democratic Forces might result in serious backlash.

Similar concerns prompted then-Secretary of Defense James Mattis to tender his resignation at the time.

Prior to going to the White House, Miller served in the Army for 27 years, first as an enlisted soldier and later commissioned as a Special Forces officer, deploying to Afghanistan and Iraq during the earliest days of the US military interventions in both countries.

Miller retired from the Army in 2014 and became a defense contractor.