Trump takes his first 2020 trip to the US-Mexico border 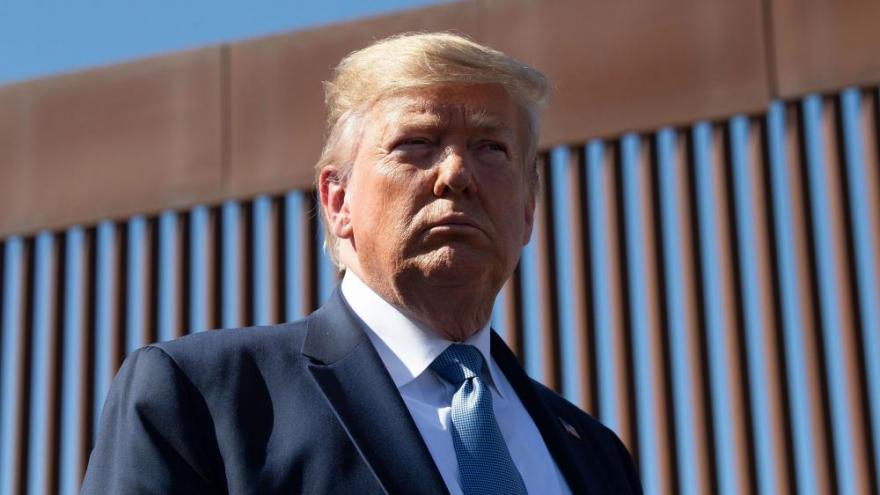 President Donald Trump is taking his first 2020 trip to the US-Mexico border on June 23, 2020 amid ongoing concerns about an uptick in coronavirus cases and on the heels of his foray back on the campaign trail in Tulsa, Oklahoma. In this photo, Trump visits the US-Mexico border fence in Otay Mesa, California on September 18, 2019.

(CNN) -- President Donald Trump took his first 2020 trip to the US-Mexico border Tuesday amid ongoing concerns about an uptick in coronavirus cases and on the heels of his foray back on the campaign trail in Tulsa, Oklahoma.

Trump's border wall is again expected to be a cornerstone of his campaign, and as the election year ramps up, his key campaign promise is taking on renewed urgency. The administration billed Tuesday's trip as a celebration of the completion of 200 miles of new wall system.

But the 200 miles are only a portion of the administration's goal to build 450 miles by the end of this year. Of those, roughly three miles have been constructed in areas where no barriers previously existed while the majority of miles replaced old, outdated designs with an enhanced system, according to US Customs and Border Protection, which oversees border wall construction.

Trump touted progress of his border wall during a roundtable with officials.

Following the roundtable, the President surveyed the border wall, posed for photos and signed a metal plaque attached to the structure marking 200 miles of construction.

Three years into his presidency, Trump has faced a host of legal challenges over his border wall and his attempt to bolster the effort with additional funds from other government accounts.

The legal fight over Defense Department funds stems from Trump's national emergency declaration on the US-Mexico border last year. Trump extended the declaration this past February, even as border arrests began to decline. The extension allows the administration to continue dipping into Pentagon funds, which the administration is continuing to rely upon to complete hundreds of miles of wall.

The administration also has to contend with private landowners whose property may be seized to build barriers along the border. Landowners often fight for what is known as just compensation -- what they deem a fair price for their property.

Over the course of Trump's presidency, the administration has engaged in an increasingly aggressive land grab along the Southwest border. And it didn't pause during the pandemic.

"It hasn't slowed down or stopped," said Tricia Cortez, executive director at the Rio Grande International Study Center. The center, based in Laredo, Texas, has been planning regular workshops to inform landowners of their rights and reaching out to those whose land might be at risk of being taken.

In Arizona, Customs and Border Protection is also painting approximately 450 feet of new border wall in San Luis, Arizona, using a "coal tar epoxy," in an effort to assess the operational benefits, according to the agency. The border agency is testing for a "coating which will extend the life of steel," a spokesperson told CNN.

It will also be tested at the US Border Patrol Academy in Artesia, New Mexico, this summer. If successful, the coating will be used in other locations, the agency spokesperson said. Customs and Border Protection did not immediately respond to questions about how success will be measured.

During an Oval Office meeting last year, Trump told various government officials that he wanted the wall to be painted black and to include French-style doors. The idea appeared to die down since. But a few months ago, Trump wanted the wall painted again, according to an administration official.

That, too, will come at a cost: Depending on what paint is used, it could increase the cost up to $1.2 million per mile, the official said. If paint is applied to all 450 new miles that Trump has said will be built by early next year, the price tag would be roughly $500 million.

But as the administration continues to invest in the border wall, arrests of migrants have declined dramatically compared to last year. New restrictions related to coronavirus have also largely barred migrants, including asylum seekers, from entering the United States.

In May, Border Patrol apprehended 21,475 people on the southern border, according to the latest available data. Of those arrested, 19,707 were expelled from the US under a public health order put in place in March.

The overall number of people arriving at the southern border rose from the previous month. Border arrests -- a measure of illegal crossings -- increased from about 16,000 in April to more than 21,000 in May. That's still lower than May 2019 when nearly 133,000 migrants, the majority of whom were families and children, were arrested.