Trump supporters could be incited to future violence by his continued promotion of 2020 election lies, DOJ and judges say 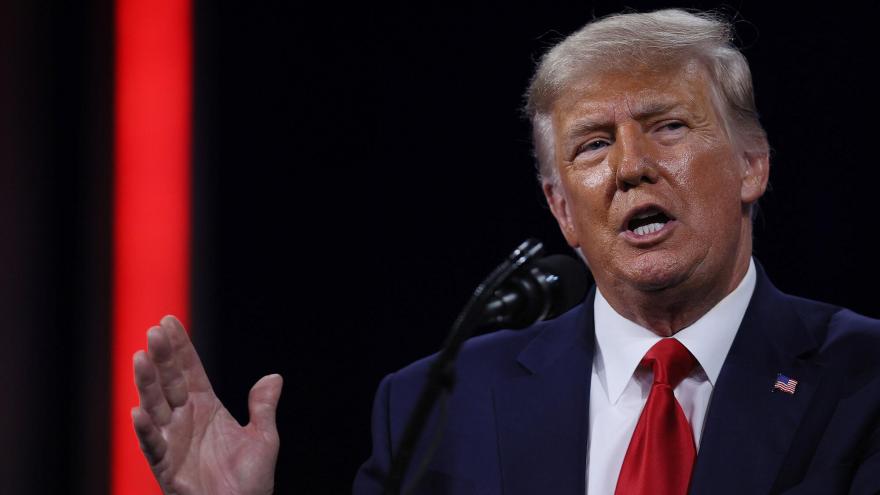 (CNN) -- Former President Donald Trump's continued promotion of the "big lie" about the 2020 election could still incite his followers to violence, the Justice Department and judges noted repeatedly this week, as courts weigh the future dangerousness of US Capitol riot defendants.

Two federal judges this week brought up the disinformation about 2020 from right-wing figures, and even Trump himself, as they considered keeping alleged Capitol rioters in jail before trial.

And prosecutors from the Justice Department are arguing more explicitly that violent threats stemming from Trump-backed conspiracy theories are still alive, and that Trump supporters could be called to act again.

"It's never too late" for pro-Trump extremist groups like the Proud Boys to mobilize, because the right-wing political climate hasn't shifted much since Trump left office, federal prosecutor Jason McCullough argued at a hearing for one of the accused Proud Boys leaders earlier this week.

The comments from prosecutors and judges demonstrate how Trump's post-presidency lying about 2020 is complicating matters for some of his most ardent supporters -- including people who heeded his call to come to Washington on January 6 and are now in jail cells awaiting trial.

Most Trump supporters still believe his lies about 2020, according to recent polling, including a Quinnipiac University survey from February that found 76% of Republicans think there was "widespread fraud" in the election. There is no proof of massive vote-rigging, audits in key states confirmed the accuracy of the results, and election officials from both parties said the vote was free and fair.

Nonetheless, Republican lawmakers in swing states have used their concerns about fraud to propose and enact restrictive voting laws that many experts say make it harder to cast a ballot.

Trump has embraced many of these proposals and has continued peddling conspiracies about the election in recent interviews and statements. He said Friday that "large scale Voter Fraud" occurred and praised Arizona Republicans who ordered a new audit of ballots in the Democratic stronghold of Maricopa County, despite previous audits finding no widespread irregularities.

Federal Judge Emmet Sullivan raised some of Trump's other recent comments in a written opinion Tuesday that kept in jail one of the men accused of dragging and beating police on the Capitol's terrace.

"The Court is not convinced that dissatisfaction and concern about the legitimacy of the election results has dissipated for all Americans. Former President Donald J. Trump continues to make forceful public comments about the 'stolen election,' chastising individuals who did not reject the supposedly illegitimate results that put the current administration in place," Sullivan wrote.

The issue came up Thursday at a hearing for another defendant in the same case.

"The unfounded allegations are out there, and they're being made constantly by the former President," Sullivan said, prompting a defense attorney to condemn Trump's comments as "absolutely reprehensible" and express hope that "somebody" will "try to stop" the lying.

The defendants that Sullivan was worried could commit future violence -- Jack Whitton of Georgia and Michael Lopatic of Pennsylvania -- have remained in jail since their arrests.

The "big lie" lives on not just in Trump's press releases but also in many of the media outlets that cheered him on during his presidency, which are deeply influential among his followers.

Many of these right-wing outlets have given airtime to false claims about the 2020 election.

"It's not as if the effort by some political leaders and media figures to stoke this sort of anger has abated in any way," Judge Amy Berman Jackson said at a court hearing on Thursday, where she weighed releasing from jail an alleged Capitol rioter who claimed he was called upon by God to enter the Senate chamber and said he would take up arms in a revolution if needed.

But because of strict legal standards, Jackson chose to release the man, Joshua Black of Alabama, on home detention. He has pleaded not guilty to an eight-count indictment.

"Do you understand that if you're opposed to the current leadership of this country and you choose unlawful means to bring about change, you're going to be in violation of your conditions of release?" Jackson asked Black in court.

"Yes, your Honor, I understand," he said, then took an oath, with his eyes closed and one handcuffed hand up, to abide by her ruling.

The question of future dangerousness by Capitol rioters keeps coming up in part because of an appellate ruling that prompted judges to ask whether a pro-Trump mob could attack again.

That federal appeals court, whose decisions govern the trial courts handling the Capitol riot defendants, noted that January 6 was a unique event -- with the threat of the crowd not likely to be repeated. The court said "specific circumstances" made January 6 possible, because the Electoral College vote was happening while Trump supporters rallied against the perceived of fraud.

That has opened the door for prosecutors to argue more about the current political environment. In court filings about detaining Capitol rioters, the Justice Department now addresses head-on the possibility of persistent danger inspired by Trump.

Prosecutors explained to a judge in a court filing Thursday that its Capitol riot cases pursue right-wing militia members and people who have said they want to "continue in similar violent endeavors until the current administration is overthrown."

The prosecutors also noted in a separate criminal case on Friday that defendant Nathaniel DeGrave had posted online in late January a picture of Trump, calling him his "idol." DeGrave is accused of driving cross-country to the Capitol with two others who had assembled a weapons cache and a walkie-talkie communications plan, then tussling with a Capitol Police officer. He has pleaded not guilty.

"The defendant is of course entitled to his political preferences. But given his prior acts of traveling across the country with weapons to 'stop the steal' and interfering with the peaceful transition of power on behalf of his idol," prosecutors wrote, "and his idol's continued inflammatory rhetoric about a stolen election, the defendant continues to pose a concrete and articulable threat to the community."