Trump supporters at rallies continue to get stranded in chilly temperatures 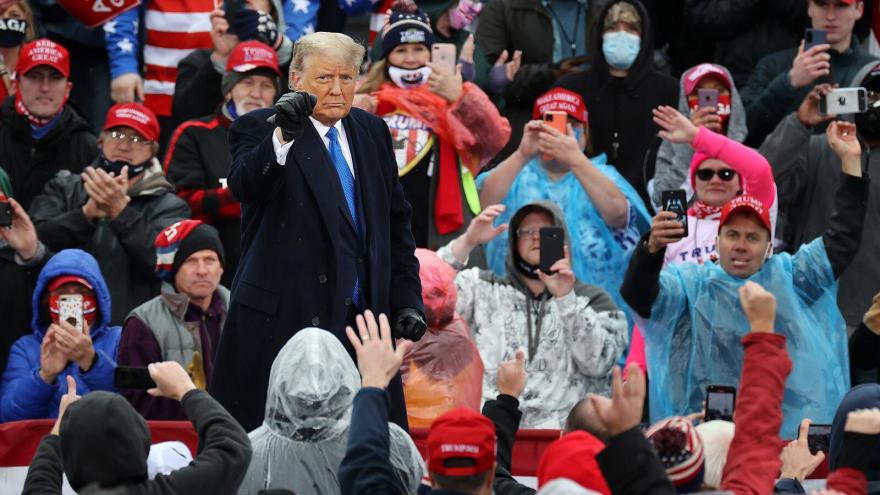 In Nebraska, Pennsylvania, North Carolina and Sunday night in Georgia, buses struggled to move crowds away from rally sites and through traffic. And after one rally, supporters were left to fend for themselves in freezing temperatures.

For months, the Trump campaign has bussed supporters from parking lots to rally sites as a way to accommodate the large crowds. The events have been held in locations such as small airports that don't normally draw rally-sized crowds and often don't have onsite parking available to support the crush of people and crowds.

The practice has created a scenario where thousands of people are left to wait for hours after the event ends for buses to shuttle them back to their cars.

And at nearly all the Trump campaign's rallies supporters have gathered shoulder-to-shoulder and masks have generally not been required, even as the coronavirus pandemic rages on.

A Trump rally in Rome, Georgia, on Sunday was a chaotic scene.

Buses transporting attendees between an airport tarmac, where Trump delivered remarks, and a parking lot were stuck in traffic. Many supporters, stuck in the jam and in 40-degree weather, were unhappy.

Thousands of supporters at a Butler-Pittsburgh Airport rally were also let loose into the night on Saturday after the President wrapped his remarks there. They streamed out to the closing cheers of "YMCA" only to find no shuttles waiting to take them back to their cars and no guidance available from Trump campaign volunteers.

As supporters spilled out of the airport parking lot, where they'd waited in line to enter earlier, thousands found themselves spilling over the side of the road and into the street, blocking police cars and emergency service vehicles. Supporters were spotted as far as three miles out from the rally site in the middle of a road with no street lights after giving up on shuttles.

The Trump campaign did not immediately respond to a CNN request for comment on the most recent incident. But Tim Murtaugh, the Trump campaign's communications director, called CNN's reporting about the Pennsylvania rally's logistical issues "fake news."

"We have 47 buses taking supporters back to parking. The line is moving and there are heating tents set up," Murtaugh tweeted. "Security and staff are helping people."

However, based on the timing of Murtaugh's tweet, the Trump campaign appeared to still be loading supporters into buses an hour and a half after the President wrapped up remarks.

And just a few days earlier, after a Trump rally in Omaha, Nebraska, hundreds of people were left stranded for hours, waiting for buses that didn't arrive, unable to reach the site because of a clogged two-lane road.

Many people started walking to their cars, down dark roads along a remote stretch near the Omaha airport, parked three or four miles away. Their foot traffic blocked the roads even further. Several medics were seen by CNN giving attention to people stuck in the cold. The temperature was right at freezing, but wind chills were far lower.

The Trump campaign said at the time that they deployed "double" the number of buses for rallygoers "but local road closures and resulting congestion caused delays."

"We always strive to provide the best guest experience at our events and we care about their safety," said Trump deputy national press secretary Samantha Zager in a statement.

She also said that the Trump campaign provided tents, heaters, generators, hot cocoa and hand warmers, but the problems came after the departure location as people walked to nearby roads to wait for buses.

At a rally in Gastonia, North Carolina, earlier in October, hundreds of supporters similarly were forced to make the decision to either wait for the bus or walk several miles down a busy road, without sidewalks, to their parking lots.