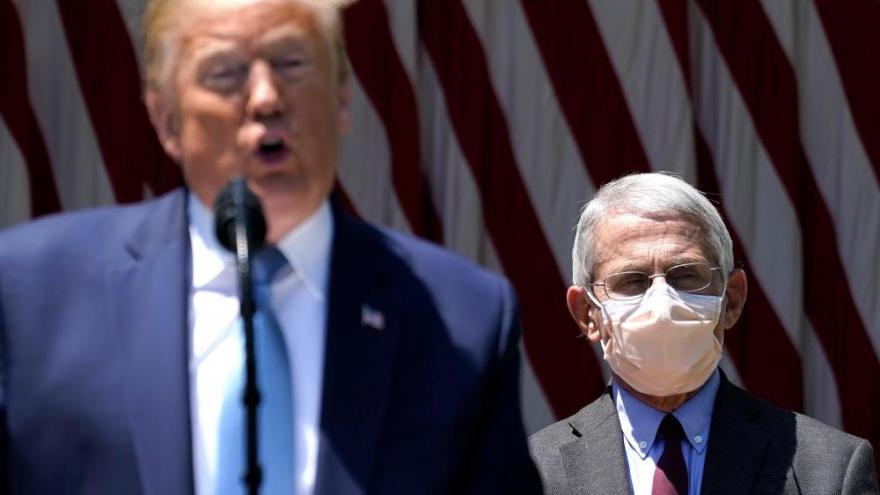 President Donald Trump is flanked by Dr. Anthony Fauci, director of the National Institute of Allergy and Infectious Diseases while speaking about coronavirus vaccine development in the Rose Garden of the White House on May 15, 2020 in Washington, DC.

(CNN) -- President Donald Trump suggested to a Florida crowd he may fire Dr. Anthony Fauci after the election, escalating his feud with the nation's leading expert on infectious diseases and providing a window into a potential post-November 3 administration purge.

Speaking after midnight following a full day of campaigning, the President was complaining about news media coverage of Covid-19 when the crowd broke out into a "Fire Fauci" chant.

"Don't tell anybody, but let me wait until a little bit after the election," Trump said to cheers. "I appreciate the advice."

Later, Trump claimed Fauci is "a nice guy but he's been wrong a lot." Trump has previously claimed Fauci opposed mask wearing earlier in the pandemic, though at the time the administration was concerned about supply levels of medical grade equipment.

Most of the crowd in Florida was not wearing masks; Trump has proceeded with rallies in states with rampant coronavirus outbreaks, believing his message of reopening will resonate with voters.

Trump's handling of the coronavirus outbreak remains the backdrop of this year's election. At another point on Sunday, Trump lambasted his rival Joe Biden by claiming he wanted to "follow science."

Trump's comments about Fauci came a day after the White House unleashed on the doctor, who is the director of the National Institute of Allergy and Infectious Diseases.

Responding to comments Fauci made to The Washington Post that criticized the Trump administration's response to the pandemic and said the US "could not possibly be positioned more poorly," a White House spokesman accused Fauci of "playing politics" ahead of the election.

Deputy press secretary Judd Deere said Fauci had decided to "make his political leanings known," though acknowledged he "has a duty to express concerns or push for a change in strategy."

As of early Monday morning, more than 9.2 million people across the US have contracted coronavirus, and more than 230,000 people have died.

While Trump and Fauci put forward a show of cooperation earlier in the pandemic, their relationship has deteriorated significantly. Fauci has said he no longer briefs the President and has been replaced by Dr. Scott Atlas, whom the President has relied on for advice on handling the coronavirus.

Other members of the White House coronavirus task force have also complained that Atlas is providing the President information that is not scientifically sound and cutting out experts with differing views.

In public polls, Americans have said they trust Fauci more than Trump to provide reliable information about the pandemic.

Trump's suggestion he may soon fire Fauci comes amid other looming administration staffing decisions. Trump has made clear he is displeased with his FBI director, attorney general and other heads of health agencies who he believes have worked against him amid the pandemic.

Trump has held off on any major Cabinet shakeups in the leadup to the election, hoping to avoid negative headlines about administration chaos before votes are cast. But how he acts after the election remains an open question; aides said they expected significant changes should Trump win reelection.

While the President recently signed an executive order that would make it easier for career federal employees to be dismissed from their jobs, it's unclear whether the new measure would include Fauci.

Under federal law, Trump doesn't have the power to directly fire Fauci, a career civil servant, and remove him from government. He could try ordering his political appointees to dismiss him, but it would be a time-consuming process that Fauci could appeal.