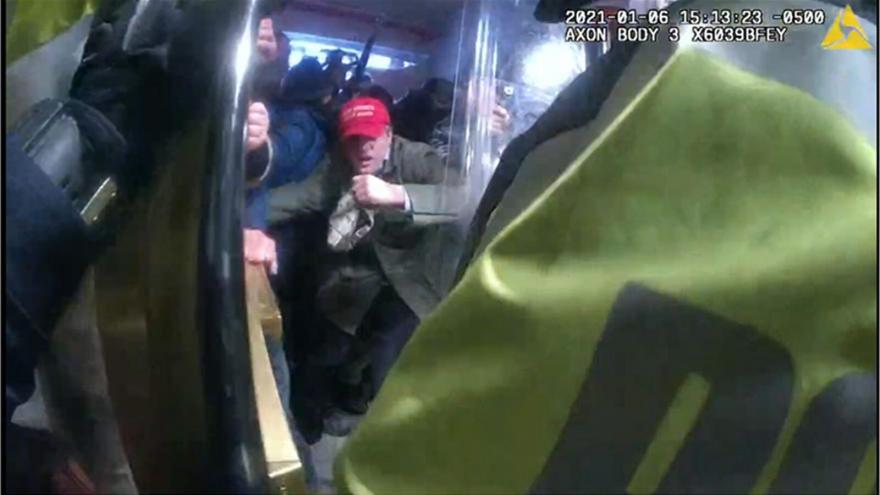 Federico Klein, who lives in the DC area and who goes by Freddie, is the first known Trump administration political appointee to be arrested for taking part in the January 6 insurrection.

(CNN) -- A former Trump State Department political appointee appeared in Washington, DC, federal court Friday after being charged for pushing against police in the Capitol building during the January 6 insurrection.

Federico Klein, who lives in the DC area and who goes by Freddie, is the first known Trump administration political appointee to be arrested for taking part in the siege. Federal authorities noted Klein, who is also a former Trump campaign aide, held a top secret-level security clearance at the time of the riot and resigned from the State Department at the end of the administration.

Investigators found several images of Klein in the riot allegedly using a police riot shield to wedge open an entrance for rioters and fighting against a police line for several minutes, according to his arrest affidavit. Klein wore a red "Make America Great Again" hat then changed into a "United States Marine Corps" hat during the riot, investigators say.

Klein is charged with six criminal counts, including assaulting officers with a dangerous weapon, violently entering the Capitol grounds and obstructing law enforcement and Congress. Around 300 people have been charged with federal crimes related to the siege.

He will be held in jail at least until March 9, when a longer hearing will take place for the judge to hear prosecutors' arguments to keep him detained and Klein's responses through his lawyers.

"It's really impossible to do anything for myself at this point," Klein said during his first court appearance Friday, as the court discussed him hiring a lawyer. He was represented by a public defender in court on Friday.

"I wonder if there's a place I can stay in detention where there's not cockroaches crawling over me everywhere while I'm trying to sleep," Klein also said to Judge Zia Faruqui. "I haven't really slept at all, your honor."

Faruqui told Klein he's only in a temporary detention location and will be moved.

Klein worked at the State Department from 2017 to 2021 in the office of Brazilian and Southern Cone Affairs, according to the arrest record. At some point, he moved from that Western Hemisphere-centric office into the Freedom of Information Act unit, which processing public records requests received by the Department, according to multiple sources familiar with his work.

He also assisted with the department's transition team, a State Department spokesperson said on Friday.

He had been paid by the Trump campaign almost $13,000 in 2016, Federal Election Commission campaign finance records show.

The State Department said on Friday his resignation was effective January 21 -- the typical date of departure for Trump administration appointees who stayed until the end of Trump's presidency.

Tipsters and witnesses ultimately identified Klein to the FBI following his resignation from State, after his image was featured on a law enforcement poster seeking information about unidentified rioters. In mid-February, a former co-worker of Klein's at the State Department spoke to the FBI and a diplomatic security special agent from the Department, identifying him further in photos of the siege, according to his arrest record.

A State Department spokesperson referred questions about Klein's case to the Justice Department, which is prosecuting him.

The lack of response by the State Department in the days after the insurrection was notable, even among the Trump Cabinet.

After the riot, then-Secretary of State Mike Pompeo used Twitter to condemn rioters who overran and injured police, broke into the Capitol and occupied the Senate chamber as lawmakers were trying to formally mark President-elect Joe Biden's election victory But Pompeo never pointed a finger at Trump for encouraging the rioters, and sought to commend the president's track record during his final days in office.

"Look, what happened that day was terrible, and I have said repeatedly that those folks who engaged in this activity need to be identified, prosecuted, and they are criminals and ought to be treated as such," Pompeo said to Hugh Hewitt, a conservative radio host. "But history will reflect on the good work that this president and our administration has done."

Pompeo's response triggered State Department officials to write a dissent channel calling for him to denounce Trump's role in the insurrection. Pompeo never did.