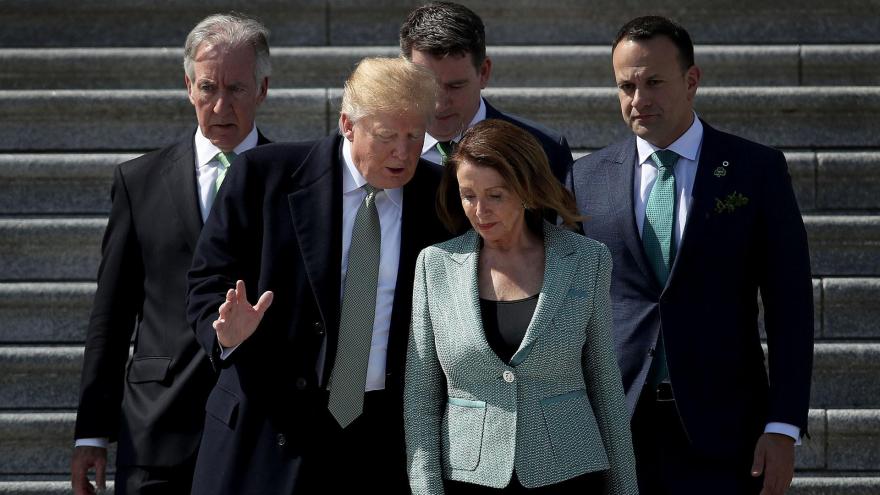 President Donald Trump and Vice President Mike Pence have declined an invitation to attend the annual St. Patrick's Day lunch on Capitol Hill, marking the first time since the event's founding more than three decades ago that neither the president nor vice president will attend.

(CNN) -- President Donald Trump and Vice President Mike Pence have declined an invitation to attend the annual St. Patrick's Day lunch on Capitol Hill on Thursday, marking the first time since the event's founding more than three decades ago that neither the president nor vice president will attend.

The White House pinned Trump's decision not to attend the lunch -- a bipartisan tradition celebrating US-Ireland relations -- on his strained relationship with House Speaker Nancy Pelosi. The lunch is hosted each year by the sitting speaker, and Pelosi invited the President last month.

"Since the Speaker has chosen to tear this Nation apart with her actions and her rhetoric, the President will not participate in moments where she so often chooses to drive discord and disunity, and will instead celebrate the rich history and strong ties between the United States and Ireland at the White House on March 12," said White House deputy press secretary Judd Deere in a statement. "The relationship between our two countries has never been stronger, and the President looks forward to welcoming the Prime Minister of Ireland for the annual Shamrock Bowl presentation."

The relationship between Trump and Pelosi sunk to new lows during the impeachment saga, and the tensions between them burst into public view during the President's State of the Union address in February. Cameras at the speech captured Trump appearing to ignore Pelosi's outstretched hand, as well as Pelosi shredding a copy of Trump's remarks as soon as he had finished speaking.

Since then, the two have not appeared together outside of the National Prayer Breakfast -- a bipartisan religious gathering that Trump used as a platform to take thinly-veiled swipes at Pelosi -- on February 6.

The St. Patrick's Day lunch has been held annually since 1987. Since its inception, there have been only four times when a president has not attended, but in each instance, presidents have sent their vice presidents in their places.

In response to the White House's comment, Drew Hammill, Pelosi's deputy chief of staff, told CNN: "There has never been stronger support in the Congress and in the country for the U.S.- Ireland bilateral relationship. One would think that the White House could set petty, partisan politics aside for this historic occasion."

Despite growing fears of a wider coronavirus outbreak, a senior White House official said the decision to skip the lunch had nothing to do with health precautions. Officials in the District of Columbia revealed the first case of the virus on Saturday.

The senior White House official said Trump decided not to attend on February 14, the same day he reviewed Pelosi's invitation, which was dated the 13th.

The White House sent Trump's response to Pelosi's office on February 28, according to the official, so the decision was final more than a week ago.

CORRECTION: This story has been updated to correct the spelling of Hammill's name and to reflect that he was responding to the White House's comment.