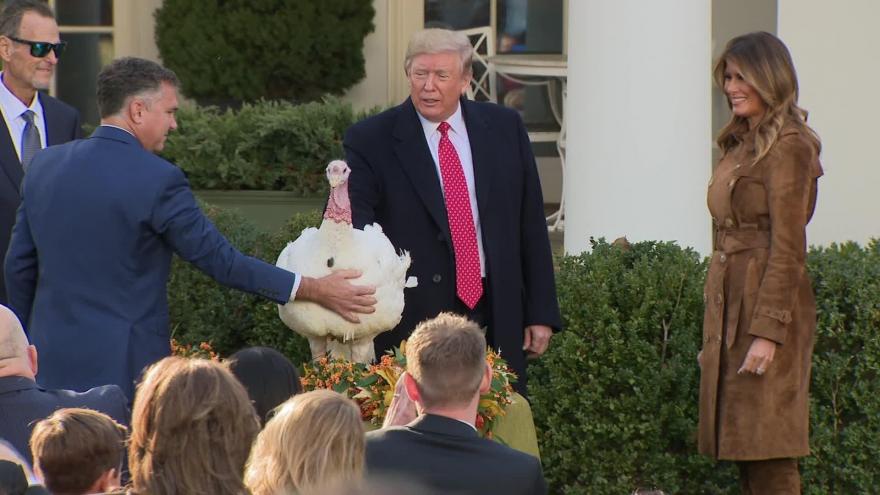 Justice, along with a side of stuffing and cranberry sauce, was served when the President chose a turkey named Butter over the fowl's partner in crime, Bread.

During the pardoning ceremony, Trump couldn't resist joking about the impeachment inquiry, telling the crowd in the Rose Garden that the turkeys "have already received subpoenas to appear in Adam Schiff's basement" next week.

He added: "It seems the Democrats are accusing me of being too soft on Turkey. But Bread and Butter, I should note that unlike previous witnesses, you and I have actually met."

Along with White House staff, the President's daughter, Tiffany Trump, as well as Republican Reps. Mark Meadows and Matt Gaetz were spotted in the audience for the pardoning.

The National Thanksgiving Turkeys, weighing in at 45 and 47 pounds, respectively, were plucked from a flock raised by Butterball turkey farmer Wellie Jackson. The turkeys rode the gravy train to the White House from Clinton, North Carolina, over the weekend.

Bread and Butter overnighted at the luxe Willard Intercontinental Hotel upon their arrival in the nation's capital and held a news conference ahead of their trip to the White House.

While Trump only publicly pardoned one bird, both Bread and Butter will avoid the fate of more than 46 million of their turkey brethren expected to be consumed across the country this Thanksgiving, according to the National Turkey Federation.

Following the ceremony, Bread and Butter will retire to Gobbler's Rest at Virginia Tech in Blacksburg, Virginia.

Rumors of turkey pardons go back in presidential history as far as the Lincoln administration. Folklore has it that Lincoln's young son asked his father to spare a pet turkey that was supposed to be part of their Thanksgiving dinner.

The National Turkey Federation became the official turkey supplier to the first family in 1947 and the formal turkey presentation ceremony has been around since President Harry Truman. Truman was the first to accept a turkey from them -- however, he did not spare the bird.

The first documented turkey pardon was given by President John F. Kennedy in 1963, though it didn't catch on right away. Even though President Gerald Ford pardoned President Richard Nixon, neither one of them decided to officially pardon any turkeys.