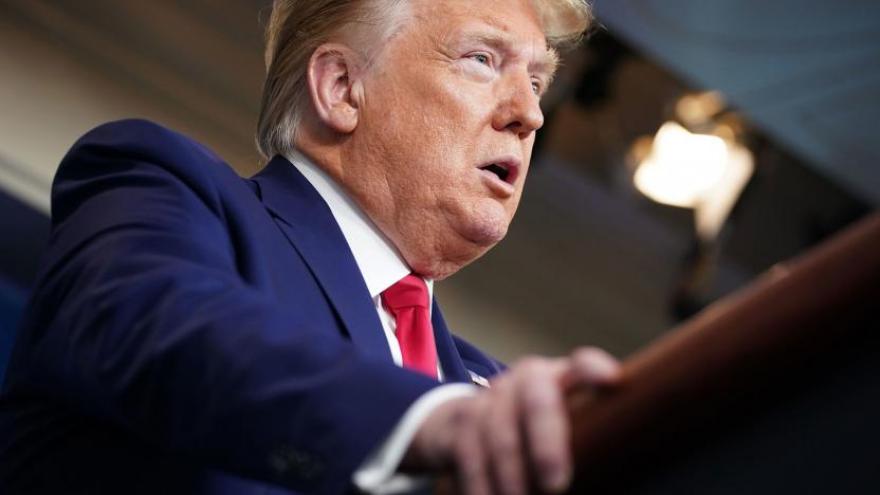 US President Donald Trump, seen here at the White House on April 6, 2020, in Washington, DC, is set to expand a federal law enforcement operation to two American cities on Wednesday.

(CNN) -- President Donald Trump said Wednesday he will "surge" federal law enforcement officers to Chicago and other American cities, despite resistance from local leaders, as he adopts a hardline "law and order" mantle ahead of November's election.

In making the move, Trump is wading further into an effort to portray Democrats as weak on crime and unable to protect the citizens of places where they are in charge. He has ordered federal agents to tamp down on protests in Portland, Oregon, leading to chaotic tableaux and reports of unmarked vehicles snatching people off the streets. And he has warned he may order federal officers into other states and cities he deems insufficiently policed, even if governors and mayors in those places don't ask for help.

His attention in recent days has focused on Chicago, whose Democratic mayor said Tuesday she would not allow "Donald Trump's troops" into her city. Before he became president, Trump once railed against his predecessor for high crime rates in Chicago, but he now blames local officials for the scourge.

Using ominous rhetoric and dark language to describe cities run by Democrats as rife with crime and violence, Trump suggested Wednesday he had little option but to take steps those leaders haven't to save innocent lives.

"No mother should ever have to cradle her dead child in her arms simply because politicians refused to do what is necessary to secure their neighborhood and to secure their city," he said during a mid-afternoon event in the East Room.

Trump's campaign has increasingly turned to dark themes of violence and chaos as it seeks to falsely paint his Democratic rival Joe Biden as anti-police. Since protests spread throughout the country following the murder of George Floyd, Trump has worked to cultivate a tough-on-crime message that includes the federal law enforcement efforts now underway.

Speaking at the same event as Trump, Attorney General Bill Barr criticized what he called "extreme reactions that have demonized police" in the wake of Floyd's killing, which he blamed for "a significant increase in violent crime in many cities."

Trump was announcing the expansion of the Operation Legend initiative, a Justice Department program first established in Kansas City earlier this month that utilizes federal law enforcement officers from the FBI, US Marshals Service, Drug Enforcement Administration and Bureau of Alcohol, Tobacco, Firearms and Explosives to combat violent crime.

Trump said he was dispatching additional federal law enforcement into other American cities, including Chicago, to tamp down on "heinous crimes of violence."

"We'll work every single day to restore public safety, protect our nation's children and bring violent perpetrators to justice," he said. "We've been doing it and you've been seeing what's happening all around the country."

"We've just started this process and frankly we have no choice but to get involved," Trump said.

Barr said there were about 200 federal agents dispatched as part of the program to Kansas City, and said a comparable number would head to Chicago to augment existing teams already there.

He said 35 agents would go to Albuquerque, New Mexico, and that other cities would be added later.

The program is named for 4-year-old LeGend Taliferro, a Kansas City resident who was fatally shot while sleeping at home.

The program doesn't require the explicit invitation from local leaders, and many have resisted having federal officers patrolling their streets.

Chicago Mayor Lori Lightfoot, a Democrat, tweeted on Tuesday evening: "Under no circumstances will I allow Donald Trump's troops to come to Chicago and terrorize our residents."

Earlier in the day, she said she would "welcome actual partnership, but we do not welcome dictatorship."

And New Mexico Democratic Sen. Martin Heinrich tweeted after being informed the operation was expanding to Albuquerque that federal law enforcement wasn't welcome.

"Given the mess it created in Portland, I let him know in no uncertain terms that this isn't the kind of 'help' that Albuquerque needs," he wrote on Twitter.

Heinrich was referring to a separate Trump administration effort, led by the Department of Homeland Security, to quell protests in Oregon that has drawn scrutiny for its tactics. Leaders there have said the federal law enforcement presence has exacerbated tensions with protesters, who are marching against systemic racism in policing.

The Trump administration has claimed it has authority to protect a federal courthouse in Portland in explaining its actions.

On Tuesday, White House press secretary Kayleigh McEnany said Trump was "very discouraged by the violence that he's seen in Chicago" and claimed Lightfoot was "clearly unable to control her streets."

A day earlier, Trump himself suggested he would expand the deployment of federal law enforcement officers to other cities led by Democrats.

"We're not going to let this happen in our country," he said, naming New York, Chicago, Philadelphia, Detroit, Baltimore and Oakland, California. "All run by liberal Democrats."

Trump has turned increasingly to "law and order" themes as he works to portray Biden as weak on crime. His effort began in early June after the murder of Floyd, an unarmed Black man who died in police custody in Minneapolis.

After mostly peaceful protests spread decrying Floyd's death and larger issues of systemic racism, Trump sought to tamp down on occasional flare-ups of violence and to claim his Democratic rival is weak on crime.

His attacks, however, have relied on false talking points, including that Biden supports defunding police.

In fact, Biden has said he supports increasing funds for community policing efforts.

But that hasn't stopped Trump's campaign from releasing fear-mongering ads that suggest 911 calls would go unanswered if Biden is elected president, including one this week that depicted an elderly woman being attacked in her home.

Yet the photo of the attack was not from recent events in the United States; its caption on Wikicommons indicated it was taken in 2014 during pro-Democracy protests in Kiev, Ukraine.