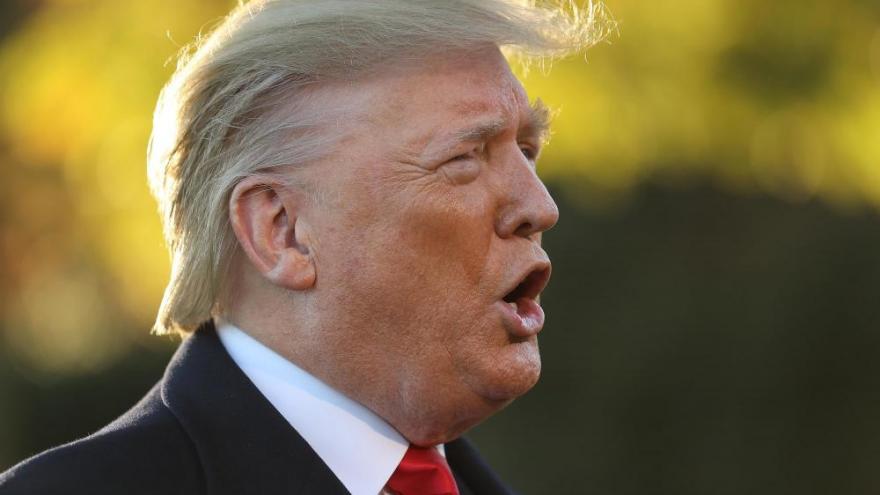 President Donald Trump talks to reporters in this November 1, 2019, photo in Washington, DC. Trump sent a letter to House Speaker Nancy Pelosi on December 17, 2019, excoriating the House Democrats' pursuit of an impeachment inquiry just a day before the full House is set to vote.

(CNN) -- President Donald Trump, on the verge of becoming the third US president to be impeached, sent an extraordinary letter to House Speaker Nancy Pelosi on Tuesday, excoriating House Democrats and casting himself as a victim of an attempted coup.

A day before the full House is set to vote on articles of impeachment accusing him of abusing his power and obstructing lawmakers' investigations, Trump wrote in his indignant six-page missive that Democrats would come to regret their efforts when voters cast ballots next fall.

Employing falsehoods and exaggerations, he bemoaned the process as woefully broken, wildly claiming that "(m)ore due process was afforded to those accused in the Salem Witch Trials."

He accused Pelosi of portraying a "false display of solemnity" during the impeachment process.

"No intelligent person believes what you are saying," Trump wrote in the letter sent on Tuesday, adding: "History will judge you harshly as you proceed with this impeachment charade."

Responding late Tuesday, Pelosi said she'd been working and only saw the "essence" of Trump's letter.

The document was a brash public display of resentments that Trump has been fostering since the start of the impeachment process. His associates say he is deeply aggrieved at the situation and views the prospect of being impeached as a stain on his legacy.

Trump and Pelosi have had a history of tense and often personal fights, which have been highlighted by the impeachment inquiry launched this fall. Their most recent White House meeting, in October, was cut short because of the insults they hurled toward each other in the Cabinet Room.

Trump is set to be the third president in US history to be impeached. Democrats have brought two Articles of Impeachment against Trump -- abuse of power and obstruction of Congress. Democrats say Trump abused his office by pressuring Ukraine to investigate his political rivals in exchange of security aid. They also charge that the President obstructed the congressional investigation by refusing to allow key officials to testify.

Trump and his aides began drafting the scathing letter last week, according to officials familiar with the matter, keeping the plan and text closely held within the West Wing until its public release Tuesday.

Trump wanted to send a message to Pelosi coming directly from him ahead of the House vote expected on Wednesday. The missive wasn't long-planned, and reflected Trump's deep-rooted resentments at the impeachment proceedings and what he views as an illegitimate attempt to remove him from office.

Some White House officials who were not involved in the letter's preparation said they were surprised when they saw the six-page document, which is indignant in tone and echoes much of Trump's public statements and tweets over the course of the past months.

There was an initial plan to release to letter on Monday, but officials moved the release to Tuesday as House members debated the rules of the upcoming impeachment vote.

Many officials who would ordinarily have been included in crafting and releasing the letter were kept out of the loop, one official said.

The White House counsel's office — which has been leading the legal defense efforts ahead of an expected Senate trial — reviewed the letter but did not take the lead on its production, according to another official.

That fell to Trump himself, who dictated portions of the missive and helped develop its themes.

For weeks, the President has publicly dismissed the probe, tweeting earlier this month that House Democrats should move faster.

"(I)f you are going to impeach me, do it now, fast, so we can have a fair ... trial in the Senate, and so that our Country can get back to business," Trump tweeted.

In the 6-page letter Trump sent to Capitol, the President calls Pelosi's actions "spiteful" and veers into what he sees as personal affronts, saying she's violated her own oath of office.

"You are offending Americans of faith by continually saying 'I pray for the President,' when you know this statement is not true, unless it is meant in a negative sense," Trump writes in the letter. "It is a terrible thing you are doing, but you will have to live with it, not I!"

In another segment of the letter, Trump writes to the House speaker: "You do not know, nor do you care, the great damage and hurt you have inflicted upon wonderful and loving members of my family."

"You are the ones interfering in America's elections," Trump says, adding that Democrats are "(b)ringing pain and suffering to our republic for your own selfish personal, political and partisan gain."

The President was heavily critical of Democrats' pursuit of impeachment, defending himself by asserting that the Articles of Impeachment introduced "include no crimes, no misdemeanors, and no offenses whatsoever."

He also asserted that Democrats' attempt to impeach him was part of a larger effort to avenge the results of the 2016 election.

"This is nothing more than an illegal, partisan attempted coup that will, based on recent sentiment, badly fail at the voting booth," Trump writes. "You are not just after me, as President, you are after the entire Republican Party."

Trump wrote that Pelosi has "cheapened the importance of the very ugly word, impeachment!"

"By proceeding with your invalid impeachment, you are violating your oaths of office, you are breaking your allegiance to the Constitution, and you are declaring open war on American Democracy," Trump wrote.

The President also used the letter to send a message to his base -- simultaneously telling his supporters he's not giving up the fight against impeachment while folding in some of his greatest hits against Democrats and the so-called Washington swamp.

Trump dedicated a large section of the letter to naming what he sees as his political victories, saying that Democrats are "desperate to distract" from the state of the economy and other administration efforts. He called the firing of FBI Director James Comey "one of our country's best decisions," and launched specific critiques against Democrats in Congress, including Adam Schiff, Jerry Nadler and Rashida Tlaib.

There is an ongoing debate inside the White House on how the President should respond on Wednesday to the vote that is expected to lead to his impeachment. Officials said — as of Tuesday evening — that he was not expected to deliver any type of formal speech to respond to the event.

"The letter is the speech," the official said.

Instead, Trump is likely to address his predicament during an evening campaign stop in Battle Creek, Michigan — an event being billed as a "Merry Christmas" rally.