Trump says 'I want no help from any country' in election 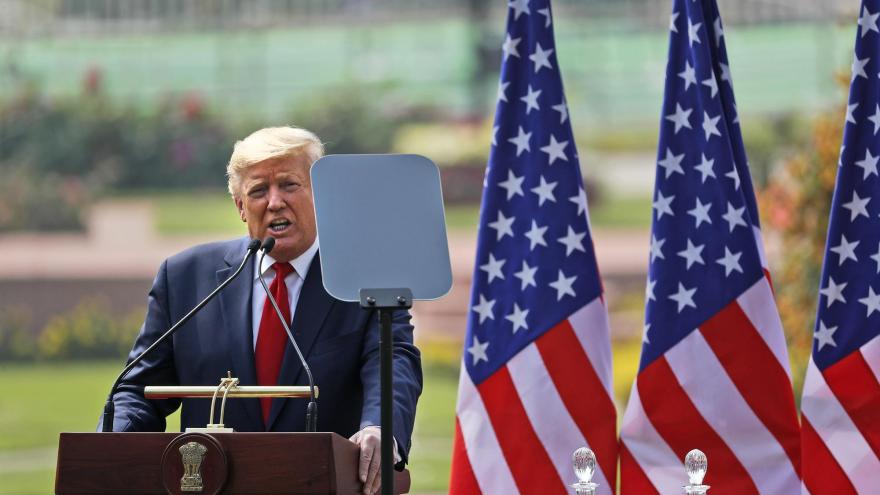 President Donald Trump said he wants "no help from any country" in the 2020 election, and claimed that he hasn't been given any. U.S. Pictured here, Trump speaks after a delegation level meeting with Indian Prime Minister Narendra Modi in New Delhi, India.

(CNN) -- President Donald Trump said Tuesday he wants "no help from any country" in the 2020 election, and claimed that he hasn't been given any.

Trump was asked by CNN's Jim Acosta whether he would pledge not to accept foreign assistance in his upcoming election in the wake of intelligence reports that Russia might again seek to interfere as they did in 2016.

Trump then engaged in a back and forth with Acosta over CNN's record of the truth.

Earlier in the news conference, Trump had declined to say whether he believes US intelligence assessments that Russia is attempting to meddle in the 2020 presidential election.

Asked directly whether he believes that intelligence, and what his message to Russian President Vladimir Putin might be, Trump instead turned to reports about Democratic presidential front-runner Bernie Sanders.

Trump said he was never briefed on intelligence showing Russian preference for Sanders: "They never told me anything about that," Trump said, "it was sort of a strange thing that they went to Bernie."

And he claimed, without evidence, that leaks about intelligence related to Russia were coming from House Intelligence Chairman Adam Schiff.

"If they don't stop it, I can't imagine that people won't go after them," Trump said.

Trump also said his acting Director of National Intelligence wasn't pushed out for being disloyal.

"Not at all. He was pushed out because frankly if he wasn't pushed out, he would have had to get out," he said, citing rules that limited his tenure as the acting chief.

Asked earlier about attempts to purge the administration of people deemed disloyal, Trump said he did not think it was a "big problem" affecting "very many people."

"We want to have people that are good for the country, are loyal to our country because that was a disgraceful situation," he said, citing the impeachment ordeal.