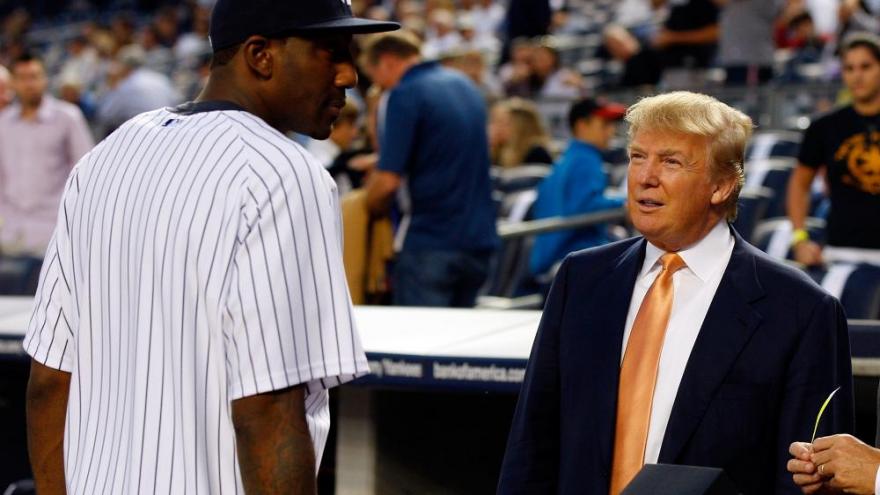 Amar'e Stoudemire of the New York Knicks talks to Donald Trump prior to the game between the New York Yankees and the Tampa Bay Rays on September 23, 2010, at Yankee Stadium.

Speaking from the White House briefing room podium, Trump said the team's president Randy Levine "asked me to throw out the first pitch" at Yankee Stadium. Trump said he accepted the offer and asked Levine, "How's the crowd going to be?"

"You don't have a crowd," the President said. "There's no such thing."

The announced first pitch came about an hour before Dr. Anthony Fauci -- the nation's top infectious disease specialist who has recently served as a punching bag for some in the White House -- is set to throw out the first pitch at Nationals Park in Washington.

To this point, Trump has been the only modern president to have not thrown out a first pitch at a Major League Baseball game while in office, breaking with a tradition that stretches back to 1910.

On Opening Day of that year, William Howard Taft threw the first ceremonial pitch in Washington. It was a day that marked the start of two historic baseball traditions: later, Taft accidentally invented the seventh inning stretch when he got on his feet, causing the crowd at Griffith Stadium -- assuming the President was departing the game -- to stand in anticipation of his departure (or so legend states).

Taft's Opening Day toss touched off an early season tradition that has stretched for more than a century. While presidents in the 1920s and 1930s often threw out the first pitch before World Series games, a president taking to the rubber during the Fall Classic has been much rarer in recent memory.

Instead, celebrity chef José Andrés, a prominent Trump critic, threw out the first pitch before Trump arrived to his seat.

Still, Trump's hesitancy hasn't stemmed from an inability to get the ball over the plate.

According to a number of accounts of his childhood and time at the New York Military Academy, Trump was a standout baseball player whose solid arm, power at the plate and long frame made him a model first basemen.

Col. Ted Dobias, who was Trump's baseball coach, said the young Trump was a "good-hit and good-field" who in his senior year was scouted by the Philadelphia Phillies.

Trump, never one to shy away from boasting about his skills, bragged to author Michael D'Antonio, who wrote a book about Trump, that he was "the best baseball player in New York when I was young."