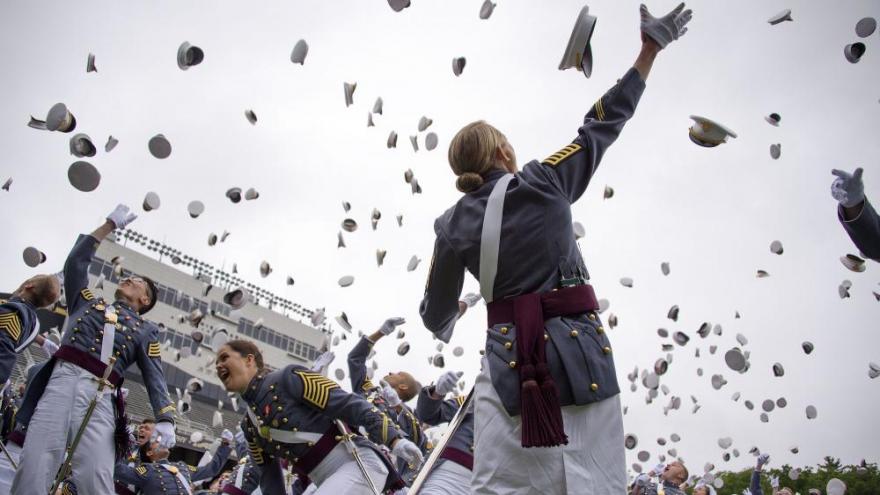 In this May 28, 2014, file photo, members of the graduating class at the US Military Academy at West Point, New York, throw their covers in the air at the end of the ceremony.

(CNN) -- President Donald Trump on Friday confirmed that he will deliver a commencement speech to the graduating class at the US Military Academy this year.

The President added that though he doesn't like "the look" of a socially distanced crowd, "eventually, next year, they'll have a commencement like it's been ... nice and tight."

West Point issued a statement Wednesday that said the Class of 2020 will return to campus to attend the ceremony, slated for Saturday, June 13, but the procession "will look different from recent graduation ceremonies due to current force health protection requirements" related to the coronavirus.

The school says they are still conducting an analysis to determine the size and scope of the ceremony.

Trump's speech to the 2020 class will mark his first at a West Point graduation.

Vice President Mike Pence is slated to deliver a commencement speech at the Air Force Academy graduation this weekend in Colorado Springs, Colorado. The commencement was moved up six weeks, and family and friends will not be able to attend.

West Point's campus is in New York state, which has been the state hardest hit by the coronavirus pandemic so far.

According to the academy, "Online learning began Thursday, March 19, and will continue through term end exams." The academy also declared a public health emergency.

A spokesperson for the Military Academy told CNN in a statement on Thursday that "U.S. Military Academy staff continues to conduct a thorough analysis and plan for the safe return of the Corps of Cadets at the right time."

"The academy senior leaders are determining the return of the Class of 2020 for graduation and commissioning to meet the needs of the Army during this national crisis as well as when summer training activities will commence for all others. A decision on the timing and scope of these events are based on the safety of our cadets, their families and the West Point community," the statement adds.