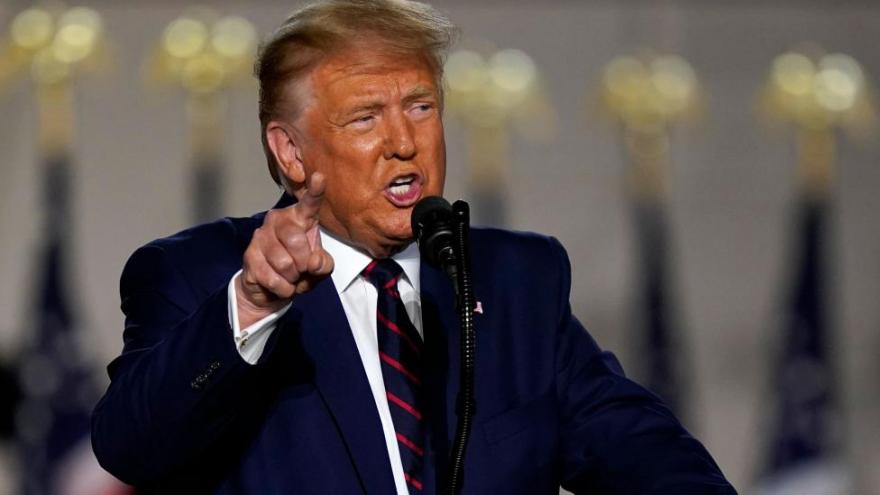 President Donald Trump speaks from the South Lawn of the White House on the fourth day of the Republican National Convention, Thursday, Aug. 27, 2020, in Washington.

(CNN) -- President Donald Trump is not going to meet with Jacob Blake's family in Wisconsin because they wanted to involve lawyers, he said at a news conference on Monday.

Blake, a Black man, was shot by police in Kenosha, Wisconsin, sparking demonstrations in the city. Trump will visit Kenosha on Tuesday.

The President said he and the pastor had "a great talk," adding, "I may at some point do that, but they did have a lawyer that wanted to be on the phone and I said no. That's inappropriate, but I did just give my best regards."

Asked about Trump's comments by CNN's Jim Acosta on "The Situation Room," Benjamin Crump, an attorney for the Blake family, said it was a routine practice for his clients to have legal counsel with them when they spoke to someone in the government, including Barack Obama during his presidency and former Vice President Joe Biden.

"I'm not going to play politics. This is my son's life we're talking about," Blake Sr. told Acosta.

White House press secretary Kayleigh McEnany told CNN's Kaitlan Collins earlier Monday that, "Currently the plans are to meet with local law enforcement and some business owners, and he'll survey the damage. But there will be more detailed plans forthcoming when they're announced."

Justin Blake, James Blake's uncle, told CNN that Jacob Blake's father "has no interest in speaking with President Trump." His only interest at the moment, Justin Blake said, is his son's well-being and getting justice.

"President Trump is a racist who stokes racial tensions. He has been stirring racial tensions since he got in the White House. Why, as Jacob's uncle, would I want to talk to him? Our focus is on Jacob and healing the community," Justin Blake said, adding that he hasn't spoken with Jacob Blake's mother about speaking with Trump.

Trump's visit to the swing state to condemn violence during the demonstrations marks the latest apparent attempt to continue his campaign against Democrat-run cities and states.

Polls showed that Trump's numbers tumbled after George Floyd's death in May and the unrest that followed. So now, in the wake of another shooting of a Black man by police, it seems the President's strategy to respond has shifted.

Throughout the Republican National Convention last week, Trump's supporters and the President himself warned of a Democratic-run America turning cities across the country into hotbeds of violence, rioting and looting.

And in Kenosha on Tuesday, Trump will use the city as a backdrop to make that case a couple of months before the election.

Wisconsin Gov. Tony Evers, a Democrat, has asked Trump to not visit Kenosha as the city works to heal and to prevent diverting local resources for a presidential visit.

"Do you really feel safer under Donald Trump?" Biden asked repeatedly throughout a speech in Pennsylvania.

Trump is "supposed to be protecting this country. But instead he's rooting for chaos and violence," and is "trying to scare America," Biden said.

Asked about the President's motivations for visiting Kenosha, McEnany suggested the situation was akin to Trump's recent visits to survey hurricane damage.

"First, the President wants to visit hurting Americans. He shows up, just like he showed up in Louisiana and Texas in response to Hurricane Laura," McEnany said.

Trump has also refused to fully weigh in on the situation involving Kyle Rittenhouse, a 17-year-old charged with killing two protesters and injuring another in Kenosha.

Asked why the President liked a tweet saying Rittenhouse was a "good example" of why a Twitter user had decided to vote for Trump, McEnany said the President had told her "he just wanted to bring some attention to some of the details that aren't as well known in that case. That the individual was being attacked and that one of the individuals who arrived on the scene did have a gun."

However, McEnany added that the President condemns violence in all its forms.

But asked if the White House believes that citizens should stop showing up in cities, especially ones they don't live in, with weapons to protect buildings, McEnany didn't directly answer.

"This White House believes our police should be fully funded," she responded. "We should have more police rather than less, we shouldn't criticize our police because it is our police officers who are responsible for taking to the streets and protecting us."