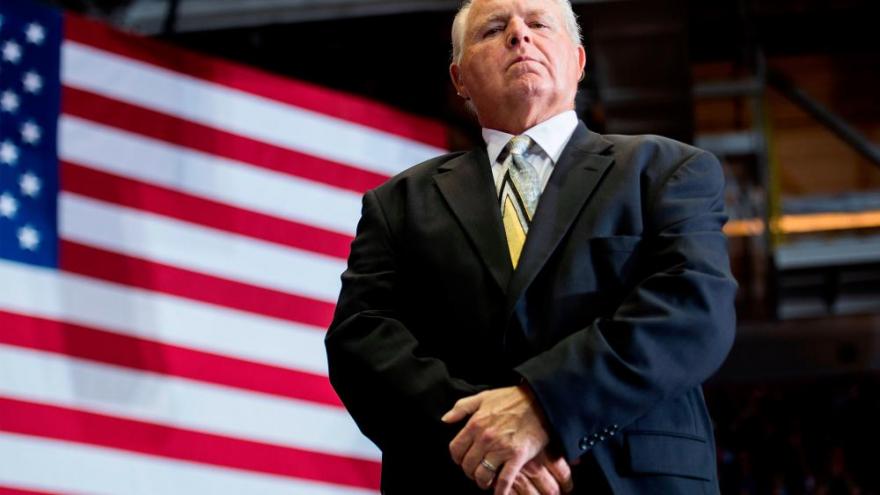 President Donald Trump told network anchors during a private lunch Tuesday that he will award Rush Limbaugh with the Medal of Freedom, one day after the prominent political radio host announced he has advanced lung cancer.

(CNN) -- President Donald Trump awarded the Medal of Freedom to conservative radio personality Rush Limbaugh on Tuesday in an unprecedented move during the State of the Union address.

First lady Melania Trump placed the medal on the visibly surprised Limbaugh, one day after the talk show host revealed he has advanced lung cancer.

"Here tonight is a special man, someone beloved by millions of Americans who just received a Stage 4 advanced cancer diagnosis. This is not good news, but what is good news is that he is the greatest fighter and winner that you will ever meet," the President said during his speech, thanking the radio host for his "decades of tireless devotion to our country."

"I am proud to announce tonight that you will be receiving our country's highest civilian honor, the Presidential Medal of Freedom," Trump said, instructing the first lady to bestow the medal on Limbaugh.

Limbaugh had not been publicly announced as a White House guest for the State of the Union until Tuesday evening, just prior to the address' start.

Trump told network anchors during a private lunch earlier Tuesday that he planned to award Limbaugh with the Medal of Freedom.

Limbaugh has been a staunch ally of the President's for years, and dined with him at his Palm Beach golf club over the holidays. Once, during an event in the Rose Garden, Trump praised Limbaugh as someone who "can speak for three hours without a phone call."

Trump wished the conservative radio talk show host a speedy recovery Monday after Limbaugh told his audience he is beginning treatment, which will require him to miss the show some days.

"I wish I didn't have to tell you this, and I thought about not trying to tell anybody, I thought about trying to do this without anybody knowing, because I don't like making things about me," Limbaugh said Monday during a live broadcast. But "there are going to be days that I'm not going to be able to be here, because I will be undergoing treatment, or I'm reacting to treatment."

Limbaugh has been hosting "The Rush Limbaugh Show" for 31 years.

The Medal of Freedom is bestowed to "individuals who have made especially meritorious contributions to the security or national interests of the United States, to world peace, or to cultural or other significant public or private endeavors," according to the White House.

People close to Trump say he personally enjoys granting his friends the nation's highest civilian honor. He bestowed the award upon seven recipients in 2019, and several more the year prior.

Like presidents before him, Trump invites anchors from all the major networks to dine with him at the White House in advance of his State of the Union address. The conversation is considered off the record, but CNN was excluded this year, and therefore did not agree to the mandate. Other anchors did attend the lunch.