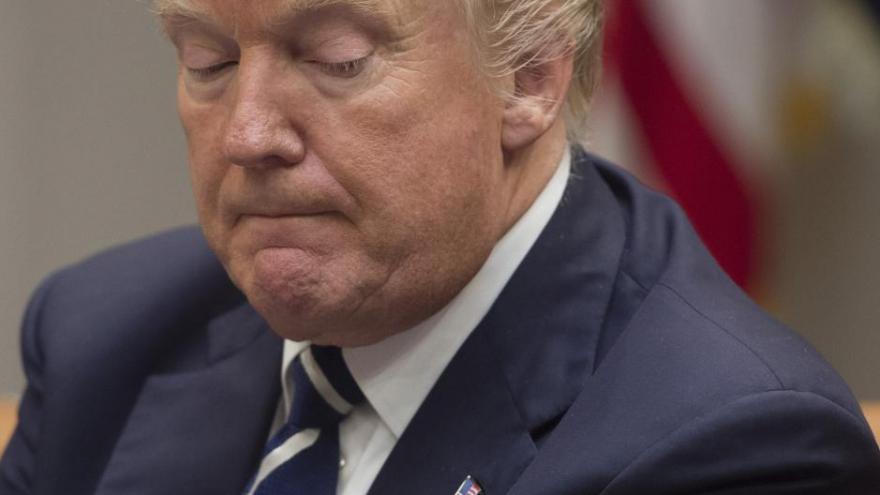 President Donald Trump spent the weekend preparing to make one of the biggest decisions of his presidency: naming a successor to Supreme Court Justice Ruth Bader Ginsburg.

(CNN) -- President Donald Trump said on Monday he would unveil his selection to replace Supreme Court Justice Ruth Bader Ginsburg by the end of the week after spending the weekend fielding advice and floating potential nominees to a wide orbit of advisers.

The decision on who to nominate to replace the late jurist and women's rights icon -- and when to nominate her -- amounts to one of the biggest decisions of Trump's presidency. Acutely aware of the stakes, Trump was essentially on the phone the entire weekend as he campaigned in North Carolina on Saturday and visited his golf course Sunday, two sources said.

In those calls, he's made one thing clear: he wants to move fast.

"I think it'll be on Friday or Saturday and we want to pay respect," Trump said in a Monday morning interview on "Fox and Friends."

"It looks like we will have probably services on Thursday or Friday, as I understand it," he went on. "And I think the respect we should wait for the services to be over for Justice Ginsburg. So we're looking at probably Friday or maybe Saturday."

Some advisers to Trump encouraged him over the weekend to nominate a replacement for Ginsburg as quickly as possible, believing once a name is announced it will be harder for Republican senators to say they would oppose a Trump nominee on procedural grounds. Already, two senators have said whomever wins November's election should select Ginsburg's replacement.

But another set of advisers strongly encouraged Trump to wait until after Ginsburg's services. Those advisers warned that any sign of disrespect for Ginsburg -- who Trump has insulted in the past -- would be used by Democrats to further galvanize their voters.

Trump appeared to take the more cautious view, saying on Fox he would make an announcement after Ginsburg's memorial services -- even though his press secretary said on Fox News less than an hour beforehand he would likely release a name by Wednesday.

Still, with a persistent polling deficit ahead of November's vote, Trump is working on an accelerated timeline.

The President held several conversations with lawmakers and spoke with Senate Majority Leader Mitch McConnell, R-Kentucky, multiple times as he made clear his desire to have a confirmation vote on his nominee before the November 3 election. As of Monday, Trump did not appear to have made a final selection but had instead narrowed down his short list to a handful of candidates.

"It's down to five. It could be any one of them," Trump said on Fox before adding it was "probably four" candidates. He named only two: Amy Coney Barrett and Barbara Lagoa.

Barrett has remained the favorite because she is seen as the safest choice in a situation where there is little room for error. A former clerk to the late Justice Antonin Scalia, Barrett was Trump's pick for a seat on the 7th US Circuit Court of Appeals. She has served as a professor of law at her alma mater, Notre Dame.

A source familiar with the process told CNN Trump was leaning toward Barrett and McConnell, who wants a smooth process, has made his preference for her obvious. Barrett was considered for the 2018 Supreme Court vacancy, and interviewed with Trump for the slot.

Her advocates were told by White House officials after Brett Kavanaugh was ultimately nominated that she was very much still in the running for another vacancy, according to one person familiar with the conversations. There was a belief among her supporters that Trump favored nominating her to replace a female justice like Ginsburg, the person said.

While Barrett is the favorite, her tough confirmation fight in 2017 for the appeals court could presage another battle. Democrats questioned her on her opposition to abortion and claimed her devout Catholic faith would color her legal views.

The White House is trying to keep the circle tight when it comes to the selection process, but Trump has also received a flood of calls with outside advice on which candidate to select, making that effort difficult at best.

After Ginsburg died Friday, the President initially expressed interest in Lagoa, a Cuban American judge he had only spoken to once before. Trump's allies advocated for the Miami-born judge, arguing her hometown could give them a campaign edge in Florida, a crucial swing state.

Though a source familiar with the process said Lagoa was vetted for the appeals court and the high court, there was an effort to find out more about her this weekend.

White House staff spoke with people in Florida about Lagoa in an attempt to glean more information. Lagoa is not well known in typical judicial circles in Washington that can be tight knit. One point of potential issue that was discussed this weekend was how Lagoa recently joined the majority in a ruling over felons' rights when the 11th Circuit Court of Appeals upheld a requirement for fines to be paid before felons regain the right to vote.

Trump's initial excitement for Lagoa seemed to fade away as the weekend wore on, though he praised her on Fox.

"She's excellent. She's Hispanic. She's a terrific woman from everything I know," he said. "I don't know her. Florida. We love Florida."

Asked whether politics is a consideration in his choice, Trump said it factored "less so than the person themselves."

White House chief of staff Mark Meadows, who is leading the process alongside White House counsel Pat Cipollone, is said to have favored Allison Jones Rushing during discussions, though at 38, her young age has been a concern. Cipollone's deputy Kate Todd is also on the shortlist and has admirers inside the White House, but she is not viewed as a finalist, an official said.

One official said the pervading view in the White House is there is little room for error in the nomination process given the political stakes, and any perceived slight of the late Ginsburg would amount to an unforced error.

The official said Trump has appeared highly aware that any missteps along the way could damage what appears to him a political lifeline.