Trump says he wants the country 'opened up and just raring to go by Easter,' despite health experts' warnings 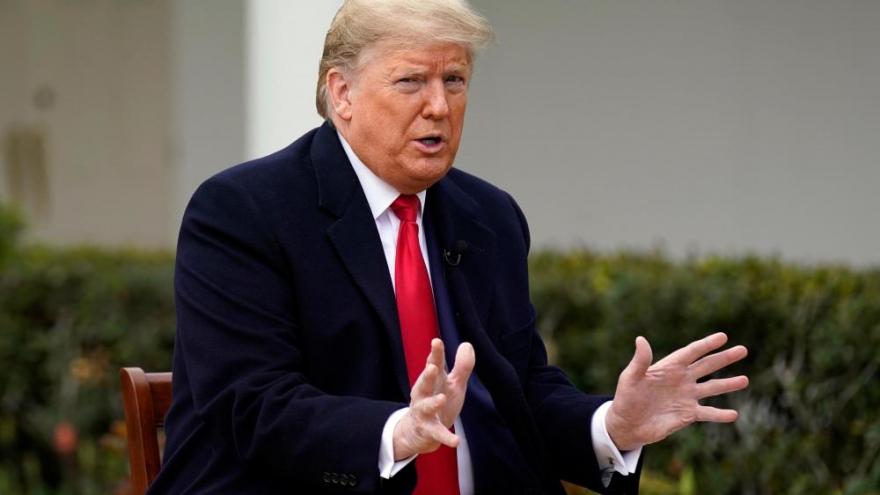 (CNN) -- President Donald Trump says he wants the nation "opened up and just raring to go by Easter" -- a date just more than two weeks away that few health experts believe will be sufficient in containing the spread of coronavirus.

Speaking during a Fox News town hall on Tuesday, Trump reiterated he was eager to see the nation return to normal soon, even as doctors warn the nation will see a massive spike in cases if Americans return to crowded workplaces or events.

"I give it two weeks," Trump said earlier in the town hall, suggesting he was ready to phase out his 15-day self-isolating guidelines when they expire. "I guess by Monday or Tuesday, it's about two weeks. We will assess at that time and give it more time if we need a little more time. We have to open this country up."

But Trump said Monday that the health experts on his task force do not necessarily agree with his hope for a quick return to their jobs to boost the economy. Some Republicans on Capitol Hill, including Sen. Joni Ernst of Iowa and Rep. Liz Cheney of Wyoming, are also sounding the alarm.

"There will be no normally functioning economy if our hospitals are overwhelmed and thousands of Americans of all ages, including our doctors and nurses, lay dying because we have failed to do what's necessary to stop the virus," Cheney, the No. 3 House Republican, tweeted Tuesday.

The White House's coronavirus task force is receiving plenty of feedback from public health experts who are sounding the alarm over easing the social distancing guidelines next week, a source familiar with the matter said.

Although Trump has talked about reopening the country by Easter, the source said, the President hasn't reached a final decision on exactly when the government's guidelines would be relaxed to get the economy back up and running. Trump is hearing from advisers who are urging him to make Easter more of an "aspirational date," the source added.

When Trump talked up the idea of packing churches on Easter, the source continued, the President knew it was more wishful thinking than a realistic goal.

"He was being himself," they said.

At the moment, the source said the current thinking is that it's unlikely Trump will relax the social distancing guidelines next week, when the current 15-day period for those measures is scheduled to come to an end. That kind of a move would likely spark fierce debate inside the task force, the source said.

Trump told reporters during the daily press briefing it was his idea -- and not that of his medical experts -- to suggest Easter, which falls on April 12, as a potential date by which the US would again be "raring to go."

"We'll only do it if it's good. We'll do large sections of the country," Trump said, adding he would listen closely to recommendations from Dr. Anthony Fauci and Dr. Deborah Birx, two top medical experts on the White House coronavirus taskforce.

Asked who suggested the Easter date, Trump said it was him.

Pressed whether it was based on data, he said: "It was based on a certain level of weeks from the time we started and it happened to arrive, we were thinking of terms of sooner. I'd love to see it come sooner."

Fauci told reporters that while he met with Trump in the Oval Office Tuesday he emphasized the need to be "flexible" in determining a date for a bounce back.

"We just had a conversation with the President in the Oval Office. You can look at a date but you gotta be very flexible," Fauci told reporters when asked what he thought of Trump's timeline.

Fauci also said that parts of the country may be OK by Easter but added other places that are worsening would likely not be.

"Obviously, no one is going to want to tone down things when you see things going on like in NYC," he said.

It's a timeline that federal public health professionals are now drafting plans for, a senior federal health official involved in the coronavirus response told CNN on Tuesday.

The official told CNN that public health professionals are drafting options "to be able to allow people to take a step back" into society in certain areas. The official described a "rolling" response, with recommendations easing for different parts of the country at different times.

The source cautioned that this approach is not without risk, as it could mean sending people back to work or school.

"The response to this outbreak is going to be rolling with increased mitigation, and then we'll see it back off, followed by another increase as the virus increases," the senior official said, referring to epidemiological modeling data shared with response team members. "With that said, we have to be willing to tolerate some risk in order to mitigate the virus."

Echoing members of the White House coronavirus task force, the official told CNN, "This is not a one-size-fits-all approach. We can't do what we're doing now and think it's sustainable. We have to allow for the variations [of the virus] moving across the country."

One idea being discussed inside the task force is dramatically expanding self-testing for the coronavirus on a massive scale inside the country, the source familiar with the matter said.

That would provide public health experts with a wealth of data to make more informed decisions about restarting the economy. Under such a scenario, almost anybody with flu-like symptoms could be tested, giving the administration a better sense of where the coronavirus is impacting communities.

That obviously would take time. But the problem right now, they added, is that very little data is available due to the slow rollout of testing across the country.

Administration health experts have an understanding of what's happening in New York, California and Washington state. But less is known about the state of the pandemic in areas where there aren't any known outbreaks.

"We don't have the testing to know what's going on," the source said.

Disagreement within the White House over Easter goal

Trump's new Easter goal came hours after the New York Democratic Gov. Andrew Cuomo said that the state is expecting a height of coronavirus infections to come in two to three weeks.

In a separate Fox News interview later Tuesday, the President provided a little more reasoning behind his timeline.

"So, I think Easter Sunday, and you'll have packed churches all over our country. I think it would be a beautiful time. And it's just about the timeline that I think is right," he said.

The administration's social distancing guidelines recommend against gatherings of more than 10 people, and many places of worship have adapted with online services.

Trump did concede he wasn't sure if that timing -- just 19 days from now -- would work.

"It gives us more chance to work on what we're doing, and I'm not sure that's going to be the day, but I would love to aim it right at Easter Sunday, so we're open for church service and services generally on Easter Sunday," he said. "That would be a beautiful thing."

Birx, who serves as the White House coronavirus coordinator, was asked during the town hall whether she thinks an Easter deadline is realistic.

"A lot of what we've done is tackle this epidemic the way people said we should have tackled the flu in 1918," Birx responded, adding that the President has asked the task force to use these two weeks "to get all the data from around the country."

She also reasserted that "every American needs to continue the President's guidelines for these next six or seven days."

Despite announcing the new guidelines under the banner "The President's Coronavirus Guidelines for America," Trump seemed to distance himself from the practices during the town hall.

"Somehow, the word got out that this is the thing we are supposed to be doing," he said, noting the country had "never done a thing like this before."

"But we had to do it. It's been very painful for our country and very destabilizing," he said.

As his advisers prepare options for returning the country to work, Trump suggested that Americans would still be able to exercise good health practices while still returning to normal.

"We have to go back to work much sooner than people thought," he said.

Trump again compared coronavirus to the flu and auto accidents, despite warnings from his health advisers that such analogies make little sense.

"We lose thousands and thousands of people to the flu. We don't turn the country off," he said, adding: "We lose much more than that to automobile accidents."

Last week, Dr. Fauci, the director of the National Institute for Allergies and Infectious Diseases, said comparing coronavirus to auto accidents was a "false equivalency" and said it was important to "face the fact" that coronavirus is more lethal than the flu.