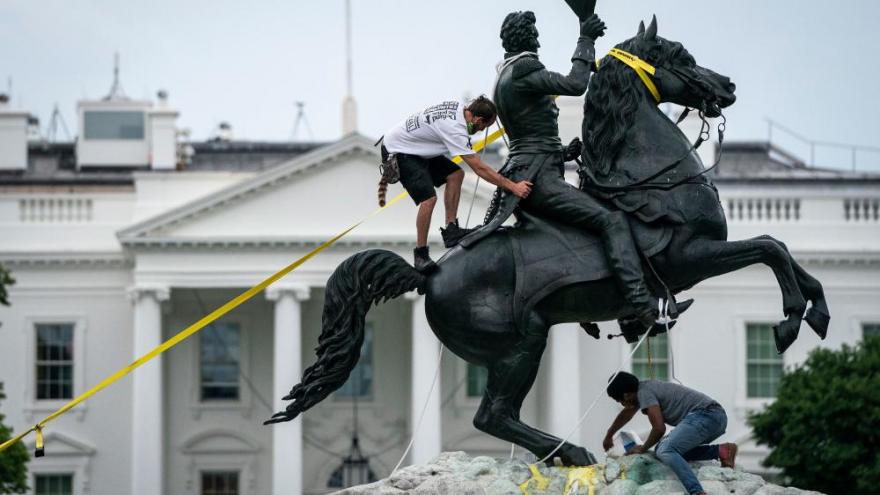 President Donald Trump said on Twitter that he has signed an executive order on protecting monuments, an action the President had been teasing for the past week.

(CNN) -- President Donald Trump said on Twitter Friday that he has signed an executive order on protecting monuments, an action the President had been teasing for the past week.

"I just had the privilege of signing a very strong Executive Order protecting American Monuments, Memorials, and Statues - and combatting recent Criminal Violence," the President wrote Friday. "Long prison terms for these lawless acts against our Great Country!"

It's not clear how the order differs from the existing Veterans' Memorial Preservation Act, under which the President claimed earlier this week that he had "authorized the Federal Government to arrest anyone who vandalizes or destroys any monument, statue or other such Federal property in the U.S. with up to 10 years in prison."

In essence, the order directs the attorney general to enforce the already-existing law. The order tells the attorney general to "prioritize within the Department of Justice the investigation and prosecution" of those who damage government-owned monuments, citing federal law that "authorizes a penalty of up to 10 years' imprisonment for the willful injury of Federal property."

The order also calls for "limiting federal grants for jurisdictions and law enforcement agencies that permit the desecration of monuments, memorials, or statues." It states that "the heads of all executive departments and agencies shall examine their respective grant programs" and apply the order's policies to the extent "appropriate and consistent with applicable law."

The order doubles down on a perceived religious element of monument damage, asserting that "Christian figures are now in the crosshairs" and citing an unnamed "influential activist" who "declared that many existing religious depictions of Jesus and the Holy Family should be purged from our places of worship."

CNN has reported some Trump allies had been pushing the White House to take a stance -- any stance -- on the racial issues fracturing the country.

While some outside advisers had advocated for an even more forceful condemnation of looting and property destruction, they concede that even a conciliatory approach that embraces the other side of the debate would better serve the President than his seeming refusal to, as one adviser put it, "pick a lane" and show leadership on the issue.

This outside adviser said the monuments executive order, which they pushed to the White House, would be a "symbolic step" toward elevating the law and order message that some feel has been undermined by the administration's inability to stop the destruction of problematic statues and failure to cajole state and local authorities to do so in other cities.

White House press secretary Kayleigh McEnany said in a statement Friday that in signing the order, Trump "took decisive action to put an end to this lawlessness and protect American streets from vandalism and mob violence."

"President Trump will never allow violence to control our streets, rewrite our history, or harm the American way of life," she added.

Friday's executive order comes as the Trump administration has been preparing a major effort to protect national monuments that Trump has previously described as part of the country's heritage, including assigning US Marshals to oversee them, people familiar with the plan said earlier this week. The order Trump said he signed Friday was part of that push.

Trump personally instructed Interior Secretary David Bernhardt to restore the only Confederate statue in Washington, DC, after it was torn down last week, two people familiar with the matter told CNN.

Trump raged at the sight of the statue being burned and torn down on June 19, tweeting, "The D.C. Police are not doing their job as they watch a statue be ripped down & burn." He later instructed Bernhardt to put the statue of Confederate Gen. Albert Pike back up, as first reported by NBC.

Senior Pentagon officials, including Defense Secretary Mark Esper, are seriously concerned about the militarized appearance of police and other civilian law enforcement officers responding to the recent protests roiling the country, according to a senior defense official.

This story has been updated with additional background information and excerpts of the executive order.