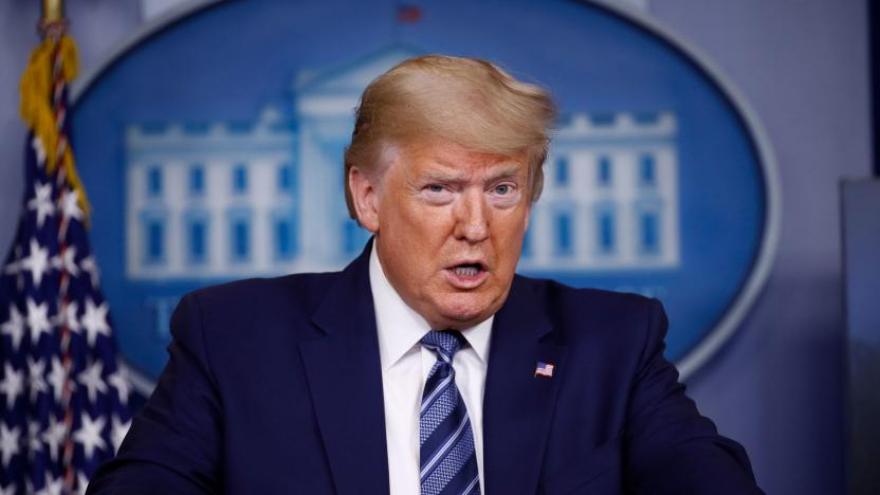 President Donald Trump said that he may "get involved" in the case of Navy captain removed from the command of the USS Theodore Roosevelt.

(CNN) -- President Donald Trump said Monday that he may "get involved" in the case of Navy captain removed from the command of the USS Theodore Roosevelt.

At a Monday briefing, Trump was asked about comments made by acting Secretary of the Navy Thomas Modly, who attacked Capt. Brett Crozier as either "too naive or too stupid" to be in command before later apologizing for the comments.

"I haven't heard it exactly, I heard they heard," Trump said, referring to the crew of the USS Theodore Roosevelt. "I heard they had a statement that was made, if that were the statement, it's a strong statement."

Crozier was relieved of command after a letter he sent to Navy leadership was leaked to the media. The letter flagged his concerns about the Roosevelt's crew of more than 4,000, saying in part "sailors do not need to die," discussed the challenges of trying to contain an outbreak of coronavirus aboard the ship and urgently requested that sailors be allowed to quarantine on land. The Navy cited loss of confidence in his command and failure to adhere to the chain of command.

"The letters shouldn't have been sent, and certainly they shouldn't have been leaked," Trump said. "This is a military operation. I must tell you, I've heard very good things about the gentlemen. Both gentlemen, by the way, I will say this, about both gentlemen. And I may look into it from the standpoint of something should be resolved because I'm hearing good things about both of people."

Trump added that he "may just get involved."

"You have two good people and they're arguing," he said, "And I'm good, believe it or not, at settling arguments. I'm good at settling these arguments. So, I may look at it in great detail, in detail, and I'll be able to figure it out very fast."

Trump said the letters were a "mistake," not only because it made families "nervous," but it also "shows weakness."

"And there's nothing weak about us now. Not anymore," the President told reporters. "We have the strongest military we've ever had and we're not going to be showing weakness to anybody."

Crozier's career up to that point, Trump said, was "very good. So, I'm going to get involved and see exactly what's going on there, because I don't want to destroy somebody for having a bad day."

Modly released a statement later Monday apologizing for blasting the ousted commander in an address to the ship's crew earlier in the day.

"I want to apologize to the Navy for my recent comments to the crew of the (USS Theodore Roosevelt)," Modly said in his statement. "Let me be clear, I do not think Captain Brett Crozier is naïve nor stupid. I think, and always believed him to be the opposite. We pick our carrier commanding officers with great care. Captain Crozier is smart and passionate."

He continued: "I believe, precisely because he is not naive and stupid, that he sent his alarming email with the intention of getting it into the public domain in an effort to draw public attention to the situation on his ship. I apologize for any confusion this choice of words may have caused."

This story has been updated to include acting Secretary of the Navy Thomas Modly's issued apology.