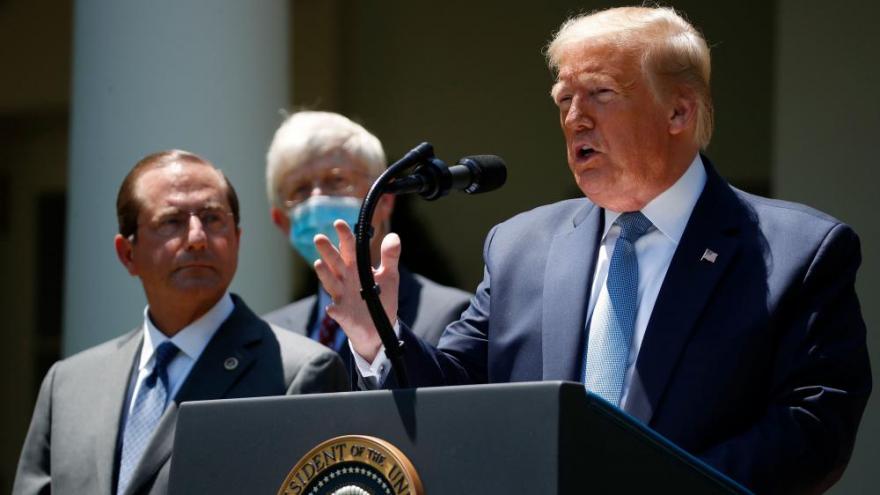 President Donald Trump speaks about the coronavirus in the Rose Garden of the White House, Friday, May 15, 2020, in Washington.

(CNN) -- President Donald Trump claimed Monday he is taking daily doses of hydroxychloroquine, a drug he's long touted as a potential coronavirus cure even as medical experts and the US Food and Drug Administration question its efficacy and warn of potentially harmful side effects.

Speaking at a meeting of restaurant executives, Trump said he began taking the antimalarial drug after consulting the White House doctor, though stopped short of saying his physician had actually recommended the drug.

"A couple of weeks ago, I started taking it," Trump said. He later said he'd been taking it every day for a week and a half.

The admission was a dramatic development in Trump's attempts to promote hydroxychloroquine as a treatment for coronavirus, which began earlier in the outbreak and has been met with resistance from medical professionals.

Because the drug is prescribed to treat malaria and other conditions, Trump has cast it as safe and suggested coronavirus patients have little to lose by trying it.

But at least one study has shown the drug does not work against Covid-19 and could cause heart problems.

Even before these reports were published, the FDA and the National Institutes of Health issued warnings about using the drug for coronavirus patients.

Trump said he hadn't been exposed, and that he started taking the drug because he had heard from frontline responders who sent him letters saying they were taking it preventatively.

"Here's my evidence: I get a lot of positive calls about it," Trump said.

"I asked him what do you think, he said, 'Well if you'd like it,' " the President told reporters.

The President's physician, Navy Cmdr. Sean Conley, alluded in a memo released Monday night to Trump's personal valet testing positive two weeks ago for coronavirus. While Conley didn't say directly that Trump started taking hydroxychloroquine in response to the valet testing positive, the timing mentioned by Trump and the positive test match up.

"After numerous discussions, he and I had regarding the evidence for and against the use of hydroxychloroquine, we concluded the potential benefit from treatment outweighed the relative risks," Conley wrote, adding that Trump has taken multiple tests for coronavirus -- all negative -- and remains symptom free.

While Trump admitted he doesn't know if the drug works, he claimed "if it doesn't, you're not going to get sick and die."

The FDA has warned against the use of hydroxychloroquine and chloroquine to treat the novel coronavirus and said they should only be used in hospitals or clinical trials because they can kill or cause serious side effects. These include serious heart rhythm problems in Covid-19 patients treated with the drugs, especially when they are combined with the antibiotic azithromycin or other medications that can affect the heart.

Trump has a common form of heart disease, based on the results of his physical.

In an interview on CNN's "Anderson Cooper 360" on Monday night, House Speaker Nancy Pelosi said the unproven nature of the drug and its questioned effectiveness in treating Covid-19 worried her.

"As far as the President is concerned, he's our President and I would rather he not be taking something that has not been approved by the scientists, especially in his age group and in his, shall we say, weight group, that is ... morbidly obese, they say. So I think it's not a good idea," Pelosi said. Trump does not qualify as morbidly obese based on the results of his physical.

Hydroxychloroquine is used to treat or prevent malaria and to treat autoimmune conditions such as lupus and rheumatoid arthritis.

Trump began promoting it two months ago as coronavirus began spreading to every part of the country, setting in motion stay-at-home orders and shutting down the economy. He was encouraged by certain allies in conservative media, who also hailed the drug as a potential solution to the growing crisis.

But even some of Trump's closest medical advisers expressed caution, including Dr. Anthony Fauci, who voiced skepticism about touting hydroxychloroquine as a treatment for coronavirus before it could be adequately tested.

Recently, a US Health and Human Services whistleblower alleged he came under pressure from political leadership at HHS to make hydroxychloroquine widely available after Trump repeatedly proclaimed its potential benefits during his daily White House briefings.