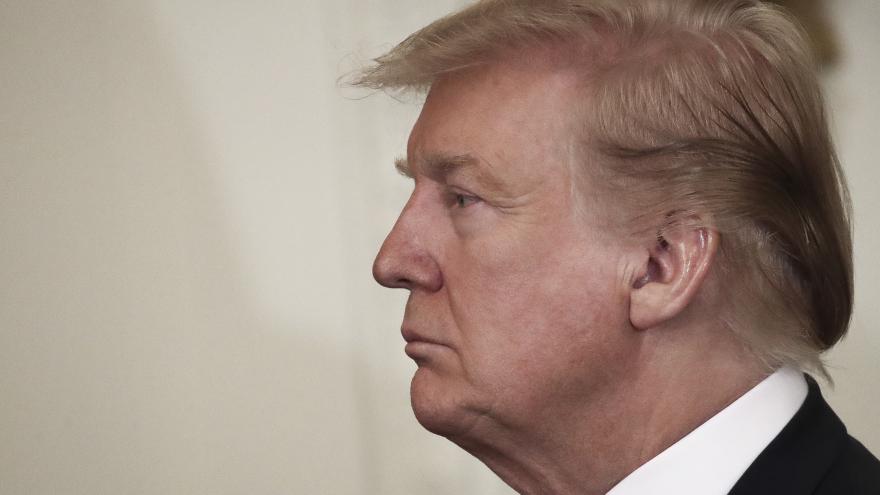 (CNN) -- President Donald Trump said he would not attend his successor's swearing-in, a day after his top aides cajoled him into releasing a video conceding he would soon be departing office.

"To all of those who have asked, I will not be going to the Inauguration on January 20th," Trump tweeted, making formal what many had long assumed: that Trump would eschew the traditional step of personally demonstrating the peaceful hand-off of power.

It came as Trump faces an uncertain final stretch in office. His top aides delivered a blunt warning to him Thursday as he sat sullenly in the West Wing and watched as his Republican allies, Cabinet secretaries and former senior staffers criticized or denounced him one by one.

His daughter Ivanka Trump, White House counsel Pat Cipollone, chief of staff Mark Meadows and others told Trump there was a real chance he would be removed from office -- whether by his own Cabinet or lawmakers -- if he did not more forcefully denounce the actions of his supporters who attacked the US Capitol the day before.

Trump did not initially want to issue a video decrying the loyalists whose actions he largely supported -- and whom he said he "loved" a day earlier -- but he told aides to prepare a speech and then he would decide.

Once he read over the brief script they had prepared, Trump agreed to record it Thursday evening -- a relief to the senior staff, though concerns lingered he could backtrack during his final days in office given his actual position has remained unchanged: that he lost the election unfairly.

The next morning, Trump was back to offering a starkly different message on his Twitter account, which has been restored after the social media firm suspended him.

He announced he would not attend Biden's inauguration. And he lent voice to his supporters, who he said would not go quietly.

"The 75,000,000 great American Patriots who voted for me, AMERICA FIRST, and MAKE AMERICA GREAT AGAIN, will have a GIANT VOICE long into the future," he wrote. "They will not be disrespected or treated unfairly in any way, shape or form!!!"

He made no mention of a Capitol Police officer who died overnight from injuries sustained while engaging rioters.

Still, having now conceded he will no longer serve a second term, Trump has begun contemplating how he will spend his final days in the White House, according to people familiar with the matter.

It's won't necessarily be a placid stretch. Democrats appear to be rushing to impeach him for a second time. While talk of removing him from office through the Constitution is deflating, Trump's administration is still shedding officials who are resigning in protest, including the secretaries of transportation and education.

On Friday, word emerged Cipollone is also considering resigning, according to a person familiar with his thinking. Since the election, he had considered resigning multiple times but has been urged to stay for the good of the country by members of the Senate and the Cabinet.

Despite being at loggerheads with Trump in recent weeks, he has been influential behind the scenes this week in encouraging Trump to be more forceful in his statements. "He's there out of a sense of duty," one source said.

His services could be required in Trump's final days as furious Democrats quickly build momentum to move on impeachment, potentially as soon as the middle of next week.

House Speaker Nancy Pelosi and her leadership team ran through their options Thursday night and the overwhelming sentiment was impeachment was the way forward, according to multiple sources. The process is unlikely to resemble the drawn-out proceedings of Trump's first impeachment; instead, Democratic officials said they expected it to move rapidly.

A simple majority is enough to impeach the President. If the House does, it would make Trump the first President to be impeached twice. Some Republican sources have even told CNN they want Trump removed before January 20, and two GOP members have told CNN they would consider voting for impeachment if the articles of impeachment seem reasonable.

Still, with Trump ending, for now, his false bid to overturn the results of the election, hope among advisers is that he will focus, finally, on his post-presidency.

Aides still have a long list of executive actions they are hoping he will sign in his waning days, including one teed up on buy-American provisions. There is talk of a trip next week to view progress on the border wall, one of Trump's proudest achievements. And a raft of pardons, including potentially for himself and his family, are expected in the coming days.

Aides are still discussing a farewell address or interview, but acknowledge the video Trump released Thursday saying a "new administration will be inaugurated on January 20" is as close to a concession he will get.

"My focus now turns to ensuring a smooth, orderly and seamless transition of power," he said, speaking in monotone and reading from a teleprompter. "This moment calls for healing and reconciliation."

Trump's highly scripted video acknowledging he will be leaving the White House is the tone his advisers hope he will stick with as he leaves office. Thursday's video was staid, taped indoors and appeared heavily edited. Trump demonstrated little emotion as he admitted his time as president was nearing its end.

Earlier in the day, Trump called off a visit to Camp David scheduled for this weekend, according to a source familiar with the planning, which would likely have been his final time at the presidential retreat. He had been planning to go before the riots but decided Thursday, amid questions about resignations and Cabinet defections, to remain in Washington. Other "lasts" are still up in the air, such as his final flight aboard Air Force One.

Trump must also decide soon when and how he wants to depart the White House. At this point, Trump is expected to go to his Mar-a-Lago members-only resort in Palm Beach, Florida, after leaving the White House for the final time, despite his displeasure at recent renovations to his private apartment there.

As he contested the results of the election, Trump refused to engage in discussions about how he wanted to spend his final days in the White House, or what he wanted to do afterward.

Officials are eager those conservations can now begin, hopeful to spend some time focusing on Trump's "legacy," even though many inside the building believe it will be irrevocably tarred by his behavior that led to this week's riots.