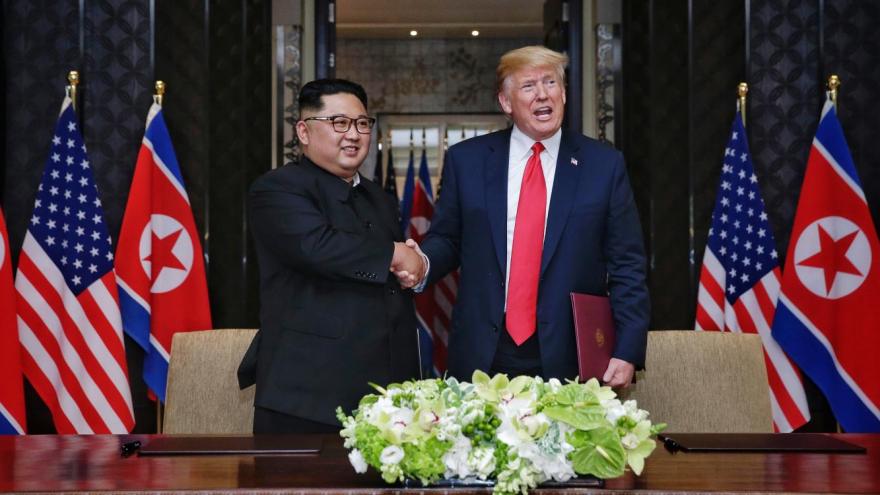 President Trump said he doesn't know whether North Korean despot Kim Jong Un is ill but nevertheless wished him luck in his potential ailments. The two leaders are seen here during their historic U.S.-DPRK summit at the Capella Hotel on Sentosa island on June 12, 2018 in Singapore. and North Korean leader Kim Jong-un

"I can only say this, I wish him well," Trump said when questioned about Kim's condition. "Good luck."

CNN's Jim Sciutto reported Monday the US is monitoring intelligence that suggests North Korea's leader is in grave danger after undergoing a previous surgery, according to a US official with direct knowledge.

A second source familiar with the intelligence told CNN that the US has been closely monitoring reports on Kim's health.

Kim recently missed the celebration of his grandfather's birthday on April 15, which raised speculation about his well-being. He had been seen four days before that at a government meeting.

Trump, who has met Kim in person three times and crossed the Korean Demilitarized Zone alongside the young dictator last summer, said they had developed strong ties.

"I've had a very good relationship with him," Trump said.

Trump has previously described "falling in love" with Kim and exchanging glowing letters that underscored their unusual relationship.

He said last week he received a "nice note" from Kim recently.

"I think we're doing fine," Trump said at the time.

Later, Pyongyang denied that Kim had recently sent Trump a letter and accused him of evoking the personal relationship for "selfish purposes."

The effects of their friendship diplomacy are mixed. North Korea has not taken concrete steps to abandon its nuclear program and has continued testing missiles.

Asked Tuesday whether he would attempt to contact Kim during his reported period of convalescence, Trump said he might.