Trump says he did not discuss Roe v. Wade with Amy Coney Barrett 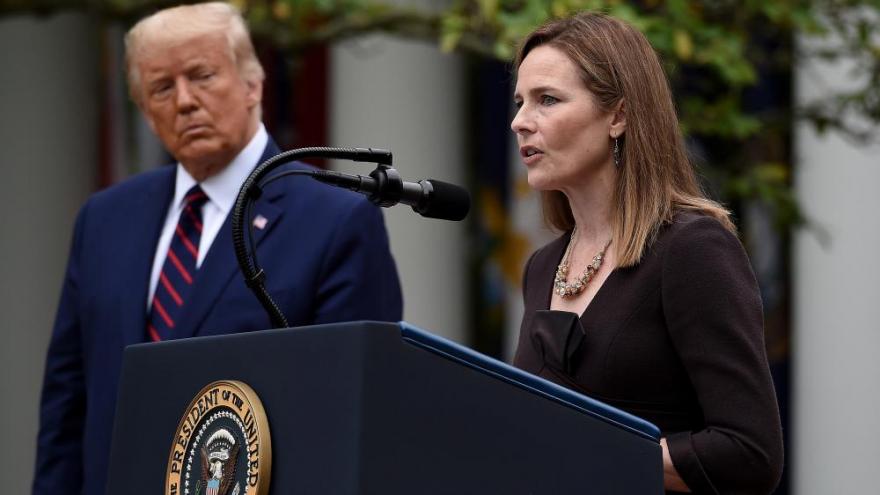 President Donald Trump said he did not discuss specific cases -- including the landmark 1973 Roe v. Wade decision which affirmed the legality of a woman's right to have an abortion -- with Judge Amy Coney Barrett before nominating her to the Supreme Court.

(CNN) -- President Donald Trump said he did not discuss specific cases -- including the landmark 1973 Roe v. Wade decision which affirmed the legality of a woman's right to have an abortion -- with Judge Amy Coney Barrett before nominating her to the Supreme Court.

And the President declined to say whether he would like to see the ruling upheld or struck down by the high court despite his previous comments on the case.

"I didn't think it was for me to discuss that with her because it's something she's going to be ruling on," Trump said in a pre-taped "Fox & Friends" interview that aired Sunday.

The President said it is possible that Barrett, a conservative federal appeals court judge, could move to overturn Roe if confirmed but did not make a prediction as to whether she would. Democrats have based much of their opposition on the likelihood that Barrett would rule to limit abortion rights as well as undermine the Affordable Care Act.

"If you look at her past actions, rulings, I guess maybe she would be in that category that you mentioned, I don't know," Trump said. "I can say this: that she is certainly conservative in her views and her rulings. We'll have to see how that all works out. I think it will work out."

Trump on Saturday said he is nominating Barrett to succeed the late Justice Ruth Bader Ginsburg on the US Supreme Court, setting off a fierce partisan battle in the waning days of a hotly contested presidential election.

Asked specifically in the interview if he would like to see Roe overturned, Trump didn't directly answer but pivoted to why he hadn't discussed the issue with Barrett. As a follow-up when Trump was asked if he thought a 6-3 conservative leaning court, with three of his picks sitting as justices, would potentially rule on an issue related to the Roe ruling, he said, "It's certainly possible. And maybe they do it in a different way. Maybe they'd give it back to the states. You just don't know what's going to happen."

Trump said in 2016 that the Supreme Court would overturn Roe v. Wade "automatically" if he appointed enough conservative justices, as he is poised to do now in his first term.

Without being asked, Trump also noted that he has been "surprised" by some of the high court's rulings since successfully installing two conservative justices without providing further detail.

"I've been surprised by some of the rulings we've already had over the last year. You think you know somebody, and then you get rulings that are a little bit different than you think could happen, so you never know what's going to happen," Trump said.

Barrett's nomination comes at a critical time in history, as the President openly questions the integrity of the upcoming election and has not committed to a peaceful transfer of power in the event he loses. He's repeatedly said that the Supreme Court needed to have all nine seats filled ahead of Election Day, in case the court needed to weigh in on the legality of mail-in ballots being sent to Americans across the country during the pandemic.

Several weighty cases also loom, should she be confirmed as swiftly as Republicans hope, including one that could determine the fate of the Affordable Care Act.