Trump says he 'can understand' Meghan, the Duchess of Sussex 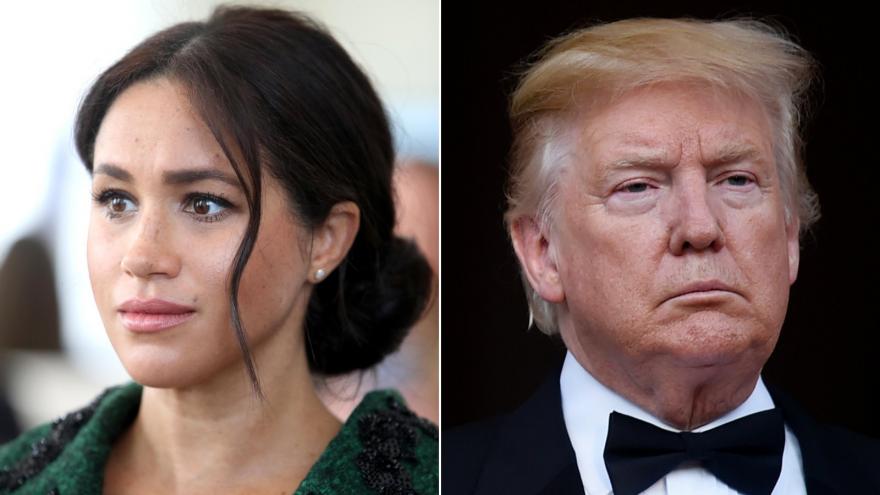 (CNN) -- US President Donald Trump said he "can understand" Meghan, Duchess of Sussex, when asked whether he felt sorry for her on Tuesday.

"I've been watching her interviews and I've seen it and she has been taking it very personally," Trump said during the interview aired on London-based talk radio station LBC.

He was responding to a question by LBC host and Brexit Party leader Nigel Farage, who had asked whether he felt sorry for the Duchess who is "saying that the press is being really unfair," Farage said.

"I guess you have to be a little bit different than that, but she takes it very, very personally. I can understand it," Trump said.

The US President added that he did not "know her" but had met her husband Harry, the Duke of Sussex, during a state visit to the UK in June.

"I met him when I was over when I was at an incredible... We had something that was so incredible. Now that was months ago, how time flies," he said.

Meghan has been a target of intense public scrutiny, especially from the media since she first began dating Harry.

Most recently, Prince Harry and Meghan said they were suing British newspaper Mail on Sunday for releasing an edited version of a private letter Meghan sent to her father.

In a documentary that aired in the UK last week, Meghan talked about the issues she's grappled with as a new wife, mother, and duchess whose life has been put under a microscope by the media and public.

She told ITV reporter Tom Bradby that she had "really tried to adopt this British sensibility of a stiff upper lip" but that ultimately "what that does internally is probably really damaging."