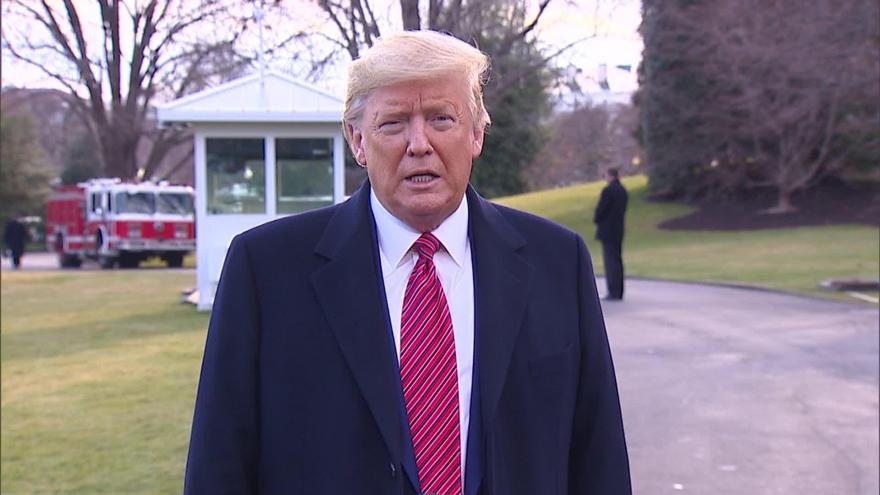 President Donald Trump is expected to deliver remarks at the White House to discuss the latest novel coronavirus developments. The update will follow a briefing from his coronavirus task force earlier in the day.

(CNN) -- The Trump administration on Saturday announced new travel restrictions after confirmation of the first coronavirus death in the US, with President Donald Trump signaling a more robust response as US cases rise.

Trump said additional cases in America were "likely" but cautioned the public not to "panic."

"Additional cases in the US are likely," Trump said, "but healthy individuals should be able to fully recover."

The President, joined by members of his administration's coronavirus task force as he made comments from the White House briefing room, aimed to calm Americans.

"We respectfully ask the media and politicians and everybody else involved not do anything to incite the panic, because there's no reason to panic at all," Trump said.

The President also offered his condolences to the first coronavirus death in America.

Dr. Jeffrey Duchin, health officer for Seattle and King County, Washington, confirmed Saturday that the individual who died was male. Trump earlier described the patient, who died in Washington state, as a "medically high-risk patient in her late 50s" and "a wonderful woman."

A senior administration official blamed the director of the US Centers for Disease Control and Prevention for the mix up.

Redfield tweeted later Saturday that the "CDC erroneously identified the patient as a female in a briefing earlier (Saturday) with the President and Vice President."

The Washington patient appears to have become ill through community spread, according to Redfield, who spoke alongside the President at Saturday's briefing.

Pence said at the briefing that the US would be expanding travel restrictions from Iran "to include any foreign national who has visited Iran within the last 14 days." He also said the US would heighten a travel advisory for specific regions of Italy and South Korea.

"We are urging Americans to not travel to the areas in Italy and the areas in South Korea that are most affected by the coronavirus," Pence said.

Pence also emphasized that "the average American does not need to go out and buy a mask," and that at least 35 million more masks per month are expected to be produced for the United States.

More courses of action to increase the availability of masks to high-risk health care workers will be announced later Saturday, Pence said.

Trump also said he'll be meeting with pharmaceutical companies at the White House on Monday to discuss developing a coronavirus vaccine.

The President's update followed a briefing from his coronavirus task force earlier in the day, which Trump said lasted for more than two and a half hours.

The President said there are now 22 cases of the novel coronavirus in the US. This number does not include individuals repatriated to the United States from Wuhan, China, or from the Diamond Princess cruise ship. Those cases have been counted separately by the CDC.

There are four instances of possible community spread transmission of coronavirus -- two in California, one in Oregon and one in Washington.

At Saturday's briefing, Trump asserted that "the markets are very strong," even though three major stock indexes this week posted their worst weekly percentage drops since the 2008 financial crisis.

"The markets will all come back," Trump said. "We have one problem -- we have to get this problem brought into focus."

"It's certainly not a good situation. When you lose travel that's a big part of market. But for a period of time we're going to have to do what's necessary. Safety, health -- number one. The markets will take care of themselves," he continued.

The President suggested the Federal Reserve should take measures to assist with the economic dip that has resulted from the coronavirus outbreak. He also brought up his long-anticipated middle-income tax cuts.

The President has previously appeared to downplay the effects of coronavirus, saying earlier this week that he did not think community spread of the infections disease in the country was "inevitable," despite that fact that CDC officials have been assessing that they expect to see community spread within the country.

Trump has rarely delivered remarks to the press from the White House briefing room, but his Saturday appearance marks his second time in the room in less than a week.

The President said at a rally in South Carolina Friday that Democrats are now "politicizing" the virus. "Now the Democrats are politicizing the coronavirus," Trump said. "They have no clue, they can't even count their votes in Iowa."

"This is their new hoax," Trump added.

Trump called it the "continuation of the hoax," and mentioned the Russia investigation and his impeachment.

A senior administration official told CNN on Friday that Trump's mid-March meeting with leaders of southeast Asian countries in Las Vegas had been postponed.

This story has been updated to reflect that the individual who died in the first reported coronavirus death in the US was male.