Trump said he may deliver convention speech from White House 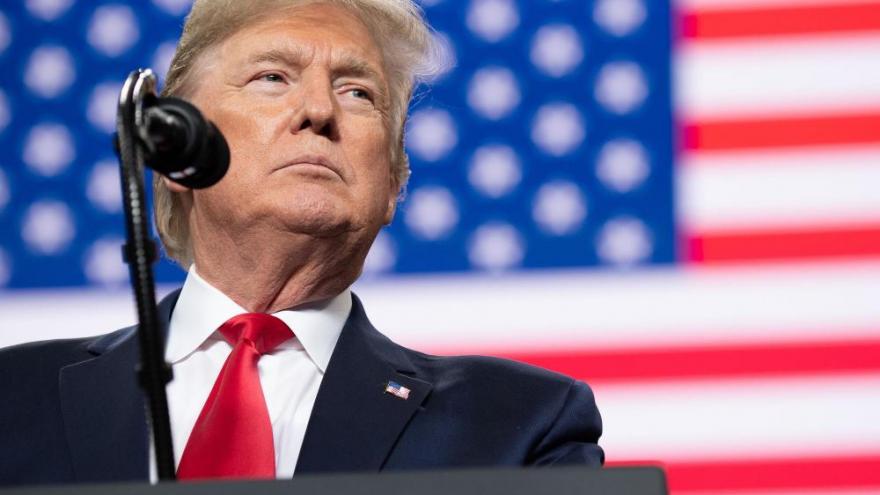 (CNN) -- President Donald Trump on Wednesday said he is considering delivering his Republican National Convention speech from the White House after scrapping his plans to deliver the speech in Charlotte, North Carolina.

Ethics experts say Trump entertaining the notion of accepting the nomination from White House property highlights his willingness to trample on norms.

A federal law, known as the Hatch Act, generally forbids the use of government property and employees for political activities with some exceptions. The President and vice president are exempted, but some previous officeholders have sought to limit political activity in the White House, for instance, by holding political events elsewhere or in the residential spaces of the presidential mansion.

"This is an overt campaign act," Kedric Payne, general counsel and senior director of ethics at the Campaign Legal Center, said of Trump's move. "He's been riding the line in making statements about Biden at White House events. This is beyond the line."

Convention planners were considering the White House South Lawn for the acceptance speech, The Washington Post reported Tuesday night, citing a Republican familiar with the talks. Those involved with the convention also told the Post a decision has not been made on the location of the celebratory events that will be held during the convention. They also said the South Lawn and Trump International Hotel in Washington, DC, were also under consideration for convention celebrations, the paper reported.

The coronavirus pandemic has upended the 2020 election cycle, causing both political parties to change convention plans and campaign methods. The RNC has repeatedly shifted its plans and made numerous changes to the nominating process and the Democratic National Convention will have limited prime-time programming each night of the event.

The speech itself may not violate the Hatch Act, but "it creates the types of optics that you see in authoritarian countries, where the government resources exist to serve high officials," said Walter Shaub, a frequent Trump critic and former head of the federal government's ethics office. "And it's just plain disrespectful to use the White House for a political event."

And by using the White House as a backdrop for a nationally televised convention speech, Trump also risks ordering government staffers to violate the Hatch Act, experts say.

"This is actually part and parcel of a larger pattern of Trump pushing legal limits, including the legal limits of those around him, to the breaking point and beyond the breaking point," said Eisen, the author of a new book, "A Case for the American People: The United States v. Donald J. Trump."

Previous officeholders have sought to limit political activity in the White House, for instance, by holding political events elsewhere or in the residential spaces of the presidential mansion.

Eisen, who served as White House ethics czar under President Barack Obama, said that administration's rules guarding against political activity were so strict that Obama returned to the residential quarters in the White House to make fundraising calls. Eisen said he once made top Obama aide Peter Rouse remove a piece of campaign memorabilia from his White House office to avoid even the appearance of politicking on government property.

What Trump is floating, Eisen said, "is a naked exploitation of government property, government time and government personnel."

Officials with the Trump campaign and the Republican National Committee did not immediately respond to inquiries about how they would navigate campaign-finance laws should Trump proceed with the speech on public property.

Some Republican senators on Wednesday said they hadn't heard the possibility of Trump giving his speech from the White House, while others expressed reservations.

"Is that even legal?" Senate Majority Whip John Thune, the No. 2 Senate Republican, said when asked by CNN about Trump floating the White House as a speech venue. "I assume that's not something that you could do. I assume there's some Hatch Act issues or something there. I don't know the answer to that." Thune added: "I think anything you do on federal property would seem to be problematic."

Senate Homeland Security and Governmental Affairs Chairman Ron Johnson said the President is "probably not allowed" to hold his convention speech at the White House. The Wisconsin Republican added that Trump: "Probably shouldn't do it."

"I don't know if it's technically legal or not, but it's gotta be somewhere," Utah Sen. Mitt Romney, a frequent Trump critic, said.

Trump previously insisted on accepting the Republican nomination before a large crowd and pushed the RNC to look for a new venue to host a full, in-person convention after North Carolina Gov. Roy Cooper, a Democrat, raised public health concerns about having massive gatherings in Charlotte. Portions of the event were set to be held in Jacksonville, Florida, but Trump later canceled those plans and announced he would make the acceptance speech in Charlotte before backing out of that event, too.

Mentioning Republican lawmakers Reps. Matt Gaetz and Jim Jordan also making speeches, Trump said, "I will probably do mine live from the White House," adding, "If for some reason somebody had difficulty with it, I could go someplace else."

Experts say hosting the event at the White House could lead to potential Hatch Act violations for any government employees who participate. But enforcement would fall to the President, who has not taken action on these matters in the past.

In June 2019, the Office of Special Counsel recommended that the President remove Kellyanne Conway from her job as a top White House aide, calling her a "repeat offender" of the Hatch Act's restrictions. She remains in her post.

"This is just another example of Trump exposing loopholes in the law," Payne added.

This is story has been updated.