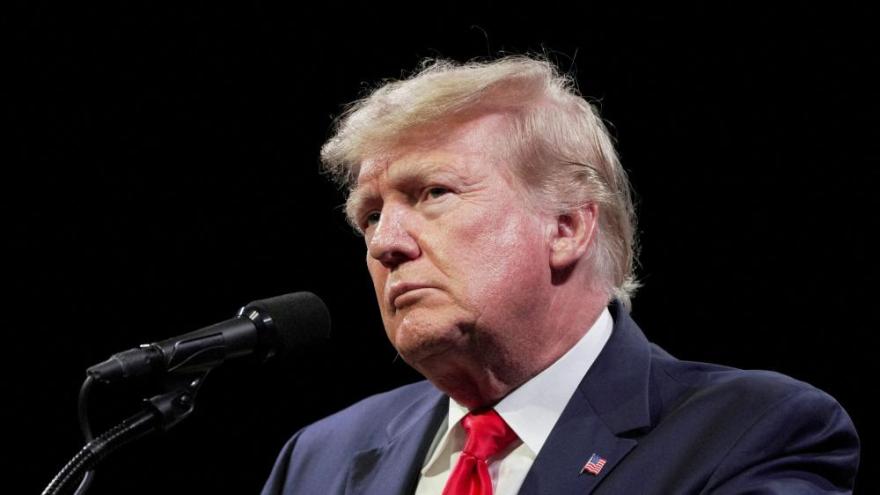 Former US President Donald Trump speaks to an audience at the "American Freedom Tour" event in Memphis, Tennessee, June 18, 2022.

(CNN) -- Former President Donald Trump on Tuesday outlined a hardline and harsh criminal justice agenda for the Republican Party, praising China's justice system, pushing for the death penalty for drug dealers and arguing the federal government should circumvent governors to use the National Guard to fight crime.

While the former President lauded the police, at one point calling police officers his heroes, what Trump did not mention in his first return to Washington since leaving office was the police that protected the US Capitol on January 6, 2021, or the deaths and injuries that stemmed from that attack. Trump instead told the audience "our great police know what to do," but the country has to "allow them to do it."

Trump did call the House select committee investigating the attack -- which has been holding high-profile hearings for weeks -- the "unselect committee of political hacks and thugs." He attacked Reps. Liz Cheney of Wyoming and Adam Kinzinger of Illinois -- the only two Republican on the committee -- by name and said that the committee "really wants to damage me so I can no longer go back to work for you."

On policing, Trump specifically called for a "return to stop-and-frisk policies in cities," argued that cities should not "strip (police) of their liability shield in any way shape or form" and generally said the country should "give our police back their authority, resources power and prestige."

The speech before the America First Policy Institute's two-day summit was the first time Trump has returned to Washington since he left office. It came as Trump teases a third run for the White House in 2024, all while the congressional investigation of the January 6, 2021, insurrection triggered by his denial of the 2020 election results, plans more hearings in September.

Trump passingly mentioned 2024 in the speech, nodding to his belief that the next Republican president needs to back his criminal justice plans, but only acknowledged his own ambitions when he pushed the lie that he won his bid for a second term in 2020. He also did not mention some of the Republicans flirting with running in 2024, like Florida Gov. Ron DeSantis and former Vice President Mike Pence, who also appeared in Washington on Tuesday.

In another reference to the lies around the 2020 election, Trump argued that "the radical left's anti-police narrative is a total lie."

"Let's call it the big lie," he said, parroting what Democrats have called Trump's election lies. "Have you ever heard that expression before? The big lie."

Pence has pushed back, saying earlier this year that "Trump is wrong" in claiming that he could overturn the results. He has in recent speeches urged Republicans to drop their grievances over 2020 and offer a forward-looking platform. Pence had been scheduled to speak Monday at the Heritage Foundation in DC, but that speech was postponed after his flight was diverted due to weather.

'We are a failing nation'

Much like his inauguration address in 2017, Trump struck a dour tone throughout the speech, painting a picture of a country riddled with crime, drugs and homelessness.

"We are a failing nation," Trump said.

"The dangerously deranged roam our streets with impunity. We are living in such a different country for one primary reason: There is no longer respect for the law and there certainly is no order. Our country is now a cesspool of crime," said Trump, at times mentioning specific high-profile crimes, many of which have been covered extensively by conservative media.

At one point, Trump praised the way Chinese President Xi Jinping handled drug dealers, recalling a moment where the Chinese president told him about "quick trials" for drug criminals in China that he estimated sentenced people in "two hours."

"It sounds horrible, doesn't it? But those are the ones that don't have any problem. It doesn't take 15 years in court. It goes quickly," Trump said, before he endorsed a "very strong death penalty for the people who sell drugs" -- something he has argued for since he was president.

To combat crime, Trump argued that the next president needs to circumvent governors and deploy the National Guard and "go beyond the governor," despite Republicans often arguing on behalf of state's rights.

"When governors refuse to protect their people, we need to bring in what is necessary anyway," Trump said, specifically arguing "the next president needs to send the National Guard to the most dangerous neighborhoods in Chicago until safety can be restored."

Trump also suggested the federal government needs to build large tent cities on the outskirts of some of the nation's largest urban centers and clear out current homeless camps. He said the government should "create thousands and thousands of high quality tents" at the "outer reaches of the cities," and then bring in medical professionals, psychologists and psychiatrists to work with people.

Trump echoed Republican optimism that the 2022 midterms will be a standout year for the party, telling the audience that he believes the GOP is "on the verge of a historic midterm election" and has an "incredible opportunity" to in in 2022.

He added: "I am here before you to begin to talk about what we must do to achieve that future when we win a triumphant victory in 2022 and when a Republican president takes back the White House in 2024, which I strongly believe will happen."

'He is the biggest name'

"He is the biggest name. He's the visionary behind many of the policies that got him elected to the White House," Lotter said. "And when you look at what's going on in America right now, so many people are clamoring for that kind of policy leadership back. They want cheap gas, growing paychecks, soaring stock markets and not what we have right now."

Trump allies told CNN they hoped the former President would use the speech to look forward and focus on setting a Republican agenda ahead of the midterms. As Trump has publicly teased a 2024 bid, aides and advisers have encouraged him to move on from the 2020 election and shift focus to policy that they believe could put him back in office, like the economy, school curriculum and crime.

Tuesday's speech made clear that Trump has yet to change course. In a speech that was explicitly supposed to be about crime, Trump devoted time to his 2020 election lies, Republicans that he views as disloyal and to attack the committee investigating January 6. One source close to Trump expressed frustration ahead of the speech that the former President seemed unable to stop obsessing over the past, concerned it would hurt his chances in a 2024 presidential campaign.

This is not new for the former President.

Trump has used his recent speeches to continue airing those grievances over 2020. His appearances on the campaign trail ahead of November's midterm elections have focused on endorsements of candidates who have embraced his election denialism and campaigned on efforts to undo the 2020 results and make voting more difficult for future elections.

McCarthy told reporters outside his office Tuesday evening that he spent time with Trump backstage prior to the event and that he and Trump also met with a group of about 50 or so lawmakers after it.

The Republican leader praised the former President's speech and said he doesn't know what Trump will decide on 2024, noting that the former President has expressed concern about the toll it has taken on his family. But McCarthy told reporters that he has encouraged Trump to hold off on announcing any White House bid until after the midterms, with party leaders eager to keep the upcoming election a referendum on President Joe Biden, not Trump.

Asked by CNN's Erin Burnett about McCarthy's comments, Florida Republican Sen. Rick Scott said Wednesday evening, "There are lots of people I know that are looking to run for president."

"They're all going to make a decision when they want to run. If President Trump or anyone else wants to announce, they'll do that," Scott, the chairman of the National Republican Senate Committee, said.

On Sunday, Lotter told CNN that "to give voice to that agenda, to lay it out for the congressional midterms and beyond, I think there is nobody better than the former President to be able to do that."

"What is going to happen next is entirely up to the voters and the President and any other people who might be getting into the race," he said at the time. "But the one thing that we know is the policies worked. And so, what we are focused on is setting that stage, laying out that policy framework, to get back to those winning policies. And President Trump is still one of the leaders, if not the biggest name, in that movement."

Still, not all former Trump aides were enthused that he was speaking at the summit, further highlighting the discord within the Trump movement ahead of the 2024 presidential election.

"Don't go, boss," Peter Navarro, who worked as an assistant under Trump, wrote in an op-ed that published Tuesday, referring to AFPI as a "Trojan horse" that is trying to "hijack the political attractiveness of Trumpism but replace Trump with an AFPI-anointed RINO."