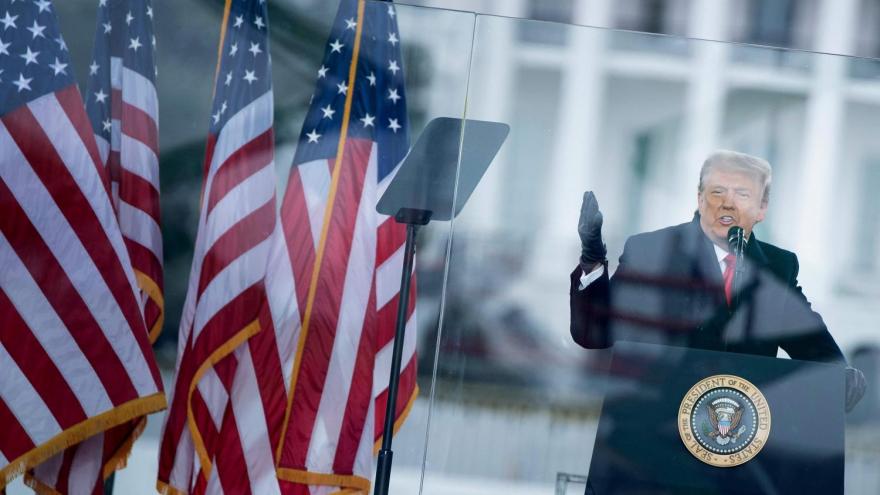 Former President Donald Trump responds to insurrection lawsuit by claiming immunity. Trump is seen here speaking to supporters from The Ellipse near the White House on January 6, in Washington, D.C.

(CNN) -- Donald Trump's attorney defended the ex-President's incendiary speech on January 6, saying he is protected under the First Amendment and had "absolute immunity" while he was President to contest the election, according to a court filing this week.

The argument is the first time Trump has formally defended his actions in court since the insurrection, and reflects his continued push to his supporters that he did nothing wrong and was robbed of a second term in office.

Trump argues in DC District Court that his bully pulpit message to his supporters at the political rally on January 6 -- encouraging them to oppose Congress certifying the vote -- was a constitutionally protected act of the presidency.

"While holding that office, former President Trump was free to advocate for the appointment and certification of electors, just as he was entitled to advocate for the passage or defeat of a constitutional amendment, or the reconsideration of a congressional act over his veto even though the President does not directly participate in those congressional acts," Trump's private attorney Jesse Binnall wrote in a response in court to a lawsuit from Democratic Rep. Eric Swalwell seeking to hold him accountable for the insurrection. "The claims against former President Trump directly contravene the absolute immunity conveyed on the President by the Constitution as a key principle of separation of powers."

The filing from Trump's legal team also argues that Swalwell can't sue because the House has already impeached Trump and the Senate tried him. (At the time, several senators, including Republican leaders, said they believed Trump still could be held accountable through litigation.)

In what's become a typical rhetorical defense from Trump, his attorney also throws barbs at his political rivals, trying to equate the ex-President with Democrats.

The filing defends Trump's effort to question the election results after states had certified their votes, comparing his push of unfounded fraud allegations to Stacey Abrams suing after her Georgia gubernatorial race.

"If similar lawsuits were brought based upon those incidents against Mr. Swalwell and his colleagues, they would inevitably be making the same arguments, and rightfully so. As a matter of law, political speakers do not owe a legally enforceable duty of care to their adversaries or others who might find themselves in the path of impassioned supporters," Trump's attorney wrote in court.

Recently, Trump surrogate Rudy Giuliani defended his own speech at the rally on January 6 just before the riot. The former New York mayor argues he was speaking in hyperbole when he called for the crowd to contest the election results with "trial by combat."