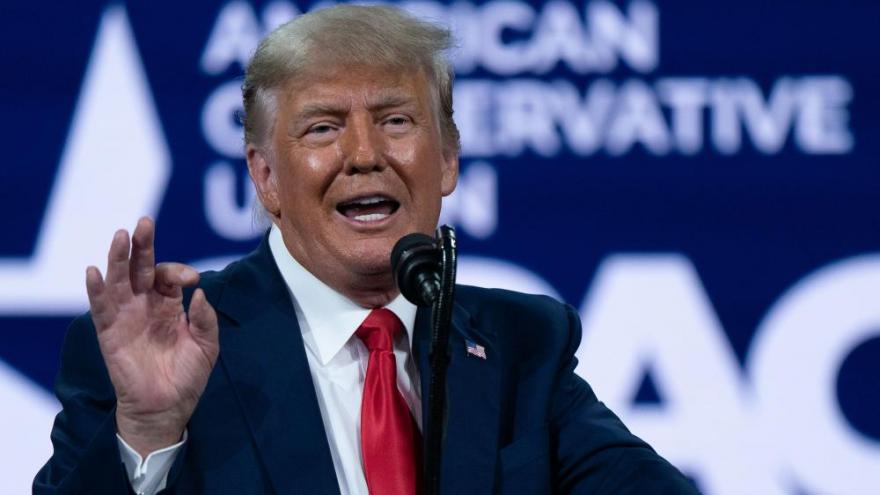 Former President Donald Trump, seen here in Orlando, Florida on February 28, requested a mail-in ballot ahead of a local municipal election in Florida.

(CNN) -- Former President Donald Trump requested a mail-in ballot ahead of a local municipal election in Florida, according to Palm Beach County records, despite his frequent attacks on voting by mail.

The records from the Palm Beach County Supervisor of Elections website show the ballot was mailed on Friday to Trump's Mar-a-Lago resort, which he made his permanent residence in 2019.

CNN has reached out to representatives for Trump for comment.

The request marks just the latest instance of Trump voting through the same process he repeatedly sought to discredit throughout the 2020 election without evidence. Trump and then-first lady Melania Trump also requested mail-in ballots for Florida's primary election in August.

In the closing months of his failed reelection bid, Trump claimed that mail-in voting was rife with fraud and an easy target for foreign election interference. Those attacks often took a partisan tinge as Trump had said he believed his party would be hurt by mail-in voting.

"With Universal Mail-In Voting (not Absentee Voting, which is good), 2020 will be the most INACCURATE & FRAUDULENT Election in history. It will be a great embarrassment to the USA," Trump tweeted in July. "Delay the Election until people can properly, securely and safely vote???"

In reality, there is no evidence that mail-in voting leads to fraud. While rare instances of voter fraud from mail-in ballots do occur, it is nowhere near a widespread problem in the US election system. Mail ballot fraud is exceedingly rare in part because states have systems and processes in place to prevent forgery, theft and voter fraud.

Despite his public rhetoric, Trump has maintained that Florida's voting system is secure, tweeting last year: "Whether you call it Vote by Mail or Absentee Voting, in Florida the election system is Safe and Secure, Tried and True. Florida's Voting system has been cleaned up (we defeated Democrats attempts at change), so in Florida I encourage all to request a Ballot & Vote by Mail!"

Asked about the apparent contradiction at the time, Trump seemed to imply that Republican-run states with existing mail-in voting programs were secure but that Democratic-led states establishing or expanding mail-in voting during the pandemic were not.

"So Florida's got a great Republican governor and it had a great Republican governor (before that) ... and over a long period of time they've been able to get the absentee ballots done extremely professionally. Florida's different from other states," Trump said then, before criticizing vote-by-mail efforts in Nevada and New York, which were led by Democratic governors.