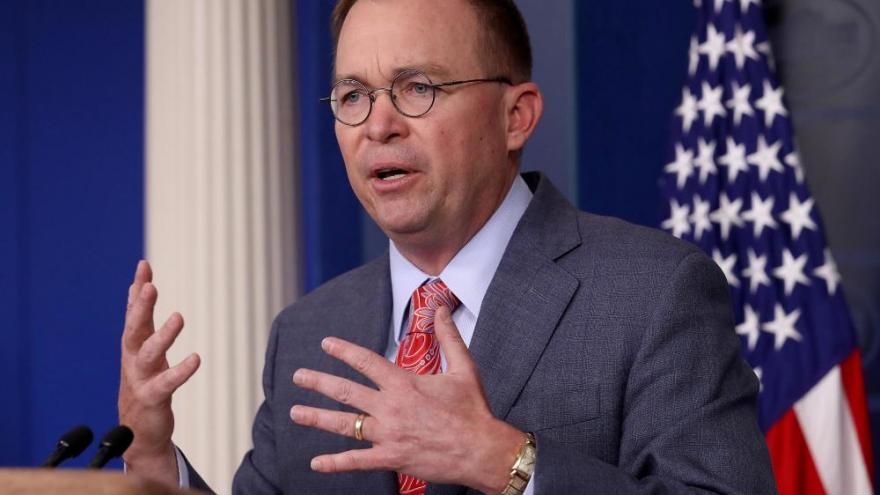 (CNN) -- President Donald Trump announced late Friday that he was replacing his acting White House chief of staff, Mick Mulvaney, with Republican Rep. Mark Meadows of North Carolina, a shake-up in the top echelons of the West Wing just as the President confronts a growing public health crisis and girds for reelection.

Meadows, who had previously announced he was leaving Congress, will become Trump's fourth chief of staff in a little more than three years in office. In a tweet, Trump did not denote him "acting," a designation Mulvaney never graduated from in the turbulent 14 months he spent in the job.

"I am pleased to announce that Congressman Mark Meadows will become White House Chief of Staff. I have long known and worked with Mark, and the relationship is a very good one," Trump tweeted Friday just after arriving at his Mar-a-Lago estate in Florida.

Trump, who did not immediately offer an explanation for the swap, thanked Mulvaney and said he would become special envoy for Northern Ireland.

"I want to thank Acting Chief Mick Mulvaney for having served the Administration so well. He will become the United States Special Envoy for Northern Ireland," Trump added. "Thank you!"

It was an abrupt announcement of news that had been anticipated for weeks. It continues a churn of staffing changes that followed Trump's impeachment acquittal a month ago.

Trump offered the position to Meadows on Thursday, people familiar with the matter said. Mulvaney was on a personal trip and not at work Friday, two officials said. Some staffers found it odd that the acting chief of staff would leave Washington during such a critical time while the administration is dealing with the coronavirus crisis.

But Mulvaney also did not attend several of Trump's recent trips -- including a campaign swing in the Western United States and his state visit to India -- which is a pattern his predecessors also followed before they were dismissed.

Though Mulvaney had been a fixture of Trump's administration in various roles over the past three years, the President effectively lost confidence in him months ago, a combination of personality conflicts and frustration at his handling of the impeachment ordeal.

Trump, who had considered dismissing Mulvaney at various junctures, was convinced not to act by close aides, who argued a leadership change in the White House during impeachment could cause unnecessary chaos.

In a statement Friday night, Meadows called it "an honor" to be selected by the President for the job, though the move surprised few in Trump's circle. After being one of the first Republican lawmakers to campaign with Trump ahead of the 2016 election, while others were initially keeping their distance, Meadows has become one of Trump's closest advisers.

He is a regular presence in the West Wing and has developed a close relationship with Trump's son-in-law and daughter, senior advisers Jared Kushner and Ivanka Trump -- a staple of West Wing proximity.

While Meadows was still occupying his congressional seat after announcing his departure, he had been speaking with the President several times a day on the phone and advising him on a wide variety of matters, according to a person familiar with the matter.

The President is also a fan of Debbie Meadows, the new chief of staff's wife, who stepped in as one of Trump's only female surrogates after the infamous "Access Hollywood" tape was published a month ahead of the 2016 election.

Before the 2005 tape, which featured Trump making vulgar comments, was released on a Friday afternoon, Debbie Meadows had already made plans with several other lawmakers' wives to embark on a "WOMEN FOR TRUMP" tour the next day. Despite expectations she would cancel the tour after the tape was released, she maintained her plans and continued to campaign for Trump, something the President often tells people he has never forgotten.

In his new role, Meadows will have one quality his predecessors lacked: strong relationships with lawmakers on both sides of the aisle. Not only was Meadows a member of the conservative Freedom Caucus during his time on Capitol Hill, he also has ties with several Democratic lawmakers.

The chief of staff role, traditionally one of the most important in any administration, has been a famously difficult one in the Trump era. All three of his chiefs have tried different governing styles, but the result is nearly always the same: The President ultimately makes the decisions, and eventually undercuts his top deputy.

Meadows will take over just as one of Trump's closest former advisers, Hope Hicks, is returning, creating a sense of new leadership in the West Wing. He's expected to play a prominent role in the President's reelection campaign.

Efforts to replace Mulvaney had been in the works since October. According to several sources familiar with the matter, the President often ignored Mulvaney's input and opted on multiple occasions to do the opposite of whatever he suggested.

Mulvaney himself had become increasingly unhappy in his role, aware that it had been diminished, people familiar with the dynamics said.

Before taking the post previously occupied by Reince Priebus and John Kelly, Mulvaney had lobbied for the Northern Ireland envoy role, people familiar with the matter said. The posting has been vacant since 2017, even as the power-sharing government in Belfast faced a crisis.

The former South Carolina congressman was ensnared in the impeachment inquiry over his involvement in the Trump administration's effort to withhold disbursing security aid to Ukraine.

Last October, Mulvaney irritated Trump by confirming during a news briefing that the President had frozen the security aid in part to pressure the country to investigate Trump's Democratic rivals.

He later tried to walk back his statement.

"I have news for everybody: Get over it. There's going to be political influence in foreign policy," Mulvaney said during the briefing.

Following the President's request on holding the Ukraine aid last summer, Mulvaney was warned by a staff member at the White House Office of Management and Budget when he asked whether a hold could be justified, according to The New York Times.

"I'm just trying to tie up some loose ends," Mulvaney wrote in a June 27 email, according to the Times. "Did we ever find out about the money for Ukraine and whether we can hold it back?"

Mulvaney was subpoenaed by House Democrats as part of the impeachment investigation but the White House asserted executive privilege and he never testified.

Mulvaney took the chief of staff role after serving as director of the Office of Management and Budget, a role he'd held since the start of the Trump administration. Mulvaney also served as the acting director of the Consumer Financial Protection Bureau from 2017 to 2018.

He acknowledged during remarks last month in the United Kingdom that maintaining the "acting" title allowed him to pull in a higher salary, since he was technically still acting as the OMB chief. He is stepping down from that role to assume the envoy position.

As he considered naming a new chief of staff this time, Trump was cautious not to repeat the Ayers situation, wary of shoving aside Mulvaney without a replacement who would agree to take the job.

This story has been updated with additional information on Mulvaney's departure.