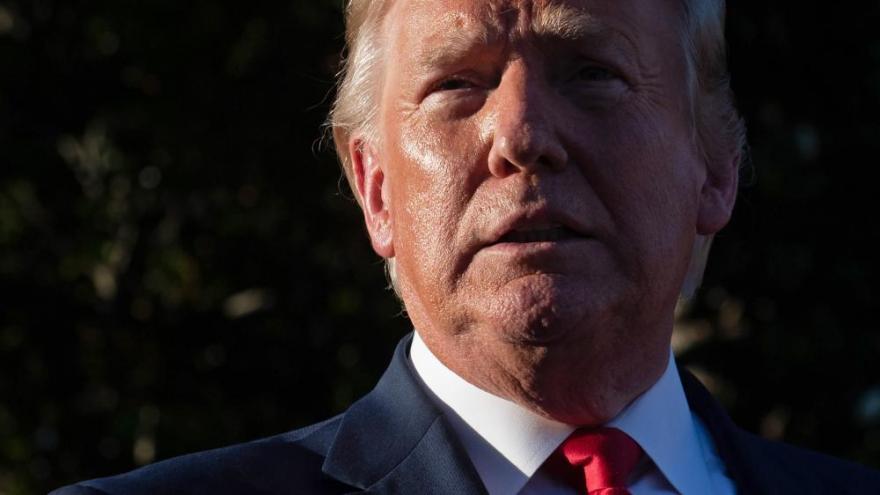 A former Arizona Republican senator who retired last year after clashing with President Donald Trump says GOP leaders should criticize the president for his tweets directed at four Democratic congresswomen of color.

Jeff Flake tells The Associated Press that as leaders, top congressional Republicans should say Trump's comments are wrong. He also says the remarks can damage the GOP brand by further alienating millennials and suburban women already disenchanted with the party.

Flake says he understands that party leaders are reluctant to weigh in because it would pressure GOP incumbents seeking re-election in tight races to do the same, and that would be risky.

Flake says, "It's just, good grief, you've got to stand for something."

In the tweet, Trump said the Democratic congresswomen of color should "go back" to their original countries. The four congresswomen are American and three are U.S.-born.

The only black Republican in the U.S. Senate is criticizing President Donald Trump for tweets directed at four Democratic congresswomen of color.

Sen. Tim Scott of South Carolina said Monday that Trump had "interjected with unacceptable personal attacks and racially offensive language" in his tweets noting the congresswomen should go back to their "broken and crime infested" countries.

Scott also called for unity, saying "aiming for the lowest common denominator will only divide our nation further."

Most Republicans have been silent about Trump's tweet, labeled by Democrats as racist and divisive. Trump has said he isn't concerned with condemnation.

Scott also mentions the "racial controversy" surrounding some of the Democratic presidential field concerning busing, saying "it is clear the Democratic Party has serious issues along these lines."

Democratic Rep. Al Green of Texas says he will force a House vote this month to begin impeachment proceedings against President Donald Trump.

Green labeled Trump "a racist, a bigot, a misogynist" and says he's unfit for office.

Green, who twice forced impeachment votes while Republicans controlled the House, said Monday that his latest effort will cite Trump's "bigotry in policy" that is "harmful to our society."

House Speaker Nancy Pelosi and other Democratic leaders have resisted calls for impeachment, despite a growing number of Democrats who support it. More than 80 House Democrats have said they favor impeachment or an impeachment inquiry against Trump, although a majority of Democrats still oppose such a move.

Two Republican senators are taking issue with President Donald Trump's tweet that freshman Democratic congresswomen of color "go back" to where they came from.

Maine Sen. Susan Collins, who is up for re-election next year, said Trump's tweet was "way over the line and he should take that down."

Republican Sen. Patrick Toomey of Pennsylvania said of the Democrats: "We should defeat their ideas on the merits, not on the basis of their ancestry."

Trump tweeted Sunday that four Democratic congresswomen should go back to the countries they came from. All of the women are American citizens and three were born in the United States.

Democrats condemned Trump's tweets as racist and divisive. But Trump says that "a lot of people love" what he said.

Unbowed by criticism of his racist tweets, President Donald Trump is telling members of Congress: "If you hate our country... you can leave."

Trump was responding to furor over his weekend tweets saying that four Democratic congresswomen of color should go back to the "broken and crime infested" countries they came from.

That's despite the fact that all of the women are American citizens and three were born in the U.S.

But Trump says that "a lot of people love" what he said.

House Speaker Nancy Pelosi says the House will vote on a resolution condemning President Donald Trump's tweets telling four Democratic congresswomen of color to "go back" to their countries, even though three were born in the United States.

Pelosi on Monday said Trump "went beyond his own low standards using disgraceful language about members of Congress" and said his xenophobic and "disgusting" comments cannot stand without rebuttal.

Pelosi has called on lawmakers from both major political parties to support the resolution, which will cite former President Ronald Reagan's last speech as president in which he thanked immigrants, adding that if the U.S. "ever closed the door to new Americans, our leadership in the world would soon be lost."

The resolution is sponsored by New Jersey Democratic Rep. Tom Malinowski, who was born in Poland and joined by others born outside the U.S.

Trump has shrugged off sharp criticism for his tweets.

Canadian Prime Minister Justin Trudeau says Trump's comments about the congresswomen are "not how we do things in Canada."

Trump tweeted the liberal lawmakers of color should go back to the "broken and crime infested" countries they came from. All four are American citizens and three were born in the United States.

Trudeau said Monday "Canadians and indeed people around the world know exactly what I think about those particular comments."

A spokesman for British Prime Minister Theresa May says the prime minister thinks "the language which was used to refer to the women was completely unacceptable."

An unsuccessful contender against Donald Trump for the 2016 Republican presidential nomination says Trump's tweets telling Democratic congresswomen of color to "go back" to their countries is "deplorable and beneath the dignity of the office."

John Kasich is a former governor of Ohio and a former member of Congress. He says in a statement Monday that Republicans must speak out against comments that "create deep animosity — maybe even hatred." He says Trump's comments contradict the "foundation of our country and all that we teach our children."

Kasich sought the presidential nomination as a moderate.

Republican Sen. Lindsey Graham is advising President Donald Trump to "aim higher" following Trump's incendiary weekend tweets about four Democratic congresswomen. Trump had tweeted that they should go back to the "broken and crime infested" countries they came from, even though all of the women are American citizens and three were born in the U.S.

Graham, a close ally of Trump who golfed with the president over the weekend, offered the advice in an interview with "Fox & Friends" Monday morning.

He said the lawmakers, including Rep. Alexandria Ocasio-Cortez of New York and Rep. Ilhan Omar of Minnesota, "are American citizens" who were "duly elected," and says Trump should "take on their policies" instead of launching personal attacks.

Still, Graham called the members "anti-Semitic" and "anti-American," saying that "AOC and this crowd are a bunch of communists. They hate Israel. They hate our own country."

A relative of U.S. Rep. Rashida Tlaib living in the West Bank says President Donald Trump is an anti-Palestinian racist.

Tlaib, a Michigan Democrat and daughter of Palestinian immigrants, was one of four congresswomen of color who were targeted in Trump's latest Twitter barrage. Trump said the women should go back to the "broken and crime infested" places they came from, ignoring the fact that all are American citizens and three, including Tlaib, were born in the U.S.

Bassam Tlaib, an uncle of the congresswoman, called the president's comments "a racist statement meant to target Rashida because she is from Palestinian roots."

He said it "proves that Trump is anti-Palestinian, anti-Islam and completely biased with Israel."

President Donald Trump is not apologizing for his weekend tweets that four congresswomen of color should go back to the "broken and crime infested" countries they came from. Instead, Trump tweeted Monday that they ought to apologize to him for past remarks about Israel and about him.

So interesting to see “Progressive” Democrat Congresswomen, who originally came from countries whose governments are a complete and total catastrophe, the worst, most corrupt and inept anywhere in the world (if they even have a functioning government at all), now loudly......

....it is done. These places need your help badly, you can’t leave fast enough. I’m sure that Nancy Pelosi would be very happy to quickly work out free travel arrangements!

Trump's new tweets came as the White House tried to defend his weekend remarks, widely condemned by Democrats as racist. Marc Short, chief of staff to Vice President Mike Pence, said Monday that those tweets were aimed at "very specific" comments made by Reps. Ilhan Omar of Minnesota, who was born in Somalia, and not as a "universal statement."

He says: "I don't think that the president's intent any way is racist."

All four of the congresswomen are U.S. citizens.

But even as Short spoke, Trump's new tweets Monday referenced "congresswomen," not just Omar. He tweeted "When will the Radical Left Congresswomen apologize to our Country, the people of Israel and even to the Office of the President, for the foul language they have used, and the terrible things they have said. So many people are angry at them & their horrible & disgusting actions!"

Omar ignited a bipartisan uproar in Washington several months ago when she suggested that members of Congress support Israel for money. Another congresswoman, Rep. Rashida Tlaib of Michigan, riled up a supportive crowd by calling the president a profanity and predicting that Trump will be removed from office.

President Donald Trump is shrugging off sharp criticism for tweets branded as racist in which he says four outspoken liberal congresswomen of color should go back to their "broken and crime infested" countries.

All are U.S. citizens and only one is foreign-born.

In a tweet Sunday night, Trump says it is "so sad" to see Democrats sticking up for the women.

....and the many terrible things they say about the United States must not be allowed to go unchallenged. If the Democrat Party wants to continue to condone such disgraceful behavior, then we look even more forward to seeing you at the ballot box in 2020!

While Trump didn't name the four, he is almost certainly referring to congresswomen Alexandria Ocasio-Cortez of New York, Ilhan Omar of Minnesota, Ayanna Pressley of Massachusetts and Rashida Tlaib of Michigan. Only Omar, from Somalia, is foreign-born.

Ocasio-Cortez tweeted in reply, "You are angry that people like us are serving in Congress and fighting against your hate-filled agenda."