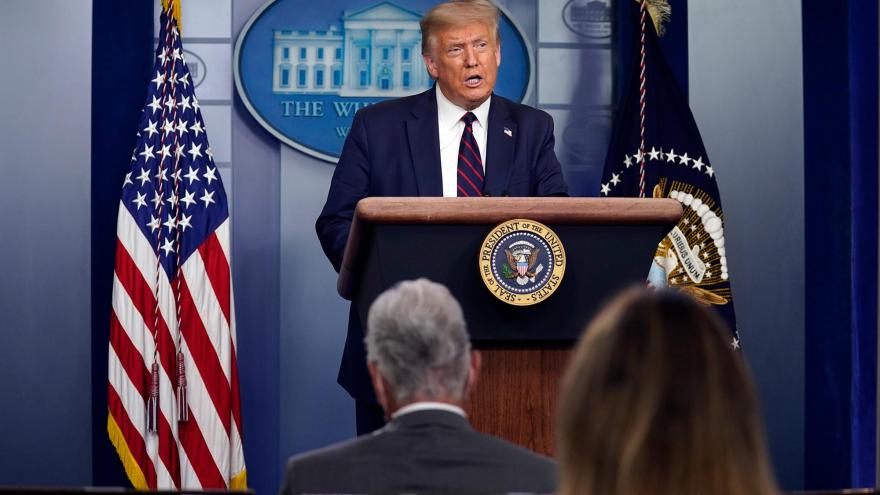 Three of President Donald Trump's marquee properties -- Mar-a-Lago, Trump National Doral and his Trump International Hotel in Washington -- reported a mixed revenue record in 2019, according to a financial disclosure form provided to the federal government.

(CNN) -- Three of President Donald Trump's marquee properties -- Mar-a-Lago, Trump National Doral and his Trump International Hotel in Washington -- reported a mixed revenue record in 2019, according to a financial disclosure form provided to the federal government.

The latest form, required annually by the Office of Government Ethics, was released late Friday. As in previous years, the form appears to list revenues for Trump Organization properties under the "income" field, typically used by officeholders to report only their personal take-home pay or share of an asset -- a move that gives an inflated view of Trump's wealth.

"2019 was a fantastic year for our country and one of the best years in the history of The Trump Organization," said Eric Trump, the President's middle son and executive vice president of the Trump Organization. "As shown in the President's Financial Disclosure Form released today, our businesses thrived with strong revenues while remaining underleveraged and maintaining very low levels of debt. Overall, our core businesses were up considerably year-over-year. We have an amazing company and I am very proud of what we accomplished in 2019."

According to the form, which is not required to be backed up by documentation, the Mar-a-Lago Club in Florida -- self-styled early in Trump's presidency as the "Southern White House" and used for summit meetings -- took in $21.4 million in 2019, vs $22.7 million reported for 2018 and $25.1 million in 2017. Doral, where Trump considered hosting the G7 meeting before backing down, was reported to have generated $77.2 million last year, vs. $75.9 million in 2018. And the Trump International, a favorite Washington stop just blocks from the back gate of the White House, stayed roughly even, throwing off $40 million.

All three properties were largely closed down in March as the coronavirus pandemic spread across the country, and furloughed thousands of staff. By law, the Trump Organization was prohibited from accessing federal relief funds. The disclosure released Friday does not include 2020 figures.

The filings indicate Trump had a minimum revenue of $446 million from dozens of sources in 2019, which include hotels, resorts, golf courses and royalties from books and television programming. That's up slightly from 2018.

Trump takes in a nearly $78,000 pension from the Screen Actors Guild, claims to earn between $100,000 and $1 million from his book "The Art of the Deal," and continues to pull in earnings from the reality show "The Apprentice."

In a footnote, the filings indicates that the Office of Government Ethics requested a listing denoting Rudy Giuliani's services as a lawyer for Trump during the impeachment proceedings.

"In any event, Mr. Giuliani is not able to estimate the value of that pro bono publico counsel; therefore, the value is unascertainable."

Self-reported numbers not subject to audit

The disclosure document, which is self-reported by Trump and is not vetted by federal ethics officials, gives only a veiled view into the President's finances, long the subject of intrigue and speculation.

Trump, who is the first President since Watergate not to divest his business interests while in office, is also the first President in decades not to release his tax records, which would offer the public a truer picture of his income and net worth, and he has fought in multiple courts to prevent them from being disclosed.

The Supreme Court has allowed House Democrats and New York prosecutors to subpoena the financial and tax records, but the legal battles to turn those documents over from Trump's financial and accounting firms continue.

The disclosures are based on the self-reported valuations made by the President and the team that manages his finances, and they aren't subject to any kind of audit. The value of assets and income is also often provided in wide ranges in sections of the disclosure form -- such as "$1,000,001 - $5,000,000" or "over $50,000,000."

Additionally, the Office of Government Ethics gives filers leeway on what they can report in the "income" column on the financial disclosure documents. Trump's reported income includes revenues from his hotels and properties, but the form doesn't distinguish Trump's take-home pay from corporate revenues or account for business expenses.

These are reported as "income" because the Office of Government Ethics doesn't focus on the income amount when making a determination on whether there's a conflict of interest -- a dollar of income would present the same amount of conflict as $1 million.

The disclosures are typically released in May, but the President and other White House staff were granted a 45-day extension due to the pandemic.