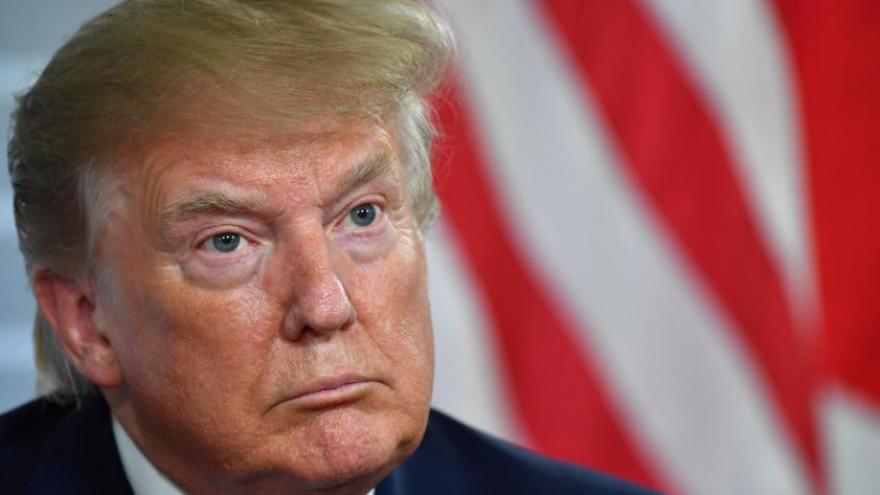 President Donald Trump repeatedly pushed for Ukrainian President Volodymr Zelensky to investigate former Vice President Joe Biden, and his son, Hunter, during a July 25 phone call, according to a transcript of the conversation released by the White House. Full credit: Aleksandr Kondratuk /Sputnik via AP and Chip Somodevilla/Getty Images

(CNN) -- President Donald Trump repeatedly pushed for Ukrainian President Volodymyr Zelensky to investigate a potential 2020 political rival, Joe Biden, and his son, Hunter, during a July 25 phone call, according to a transcript of the conversation released by the White House.

Trump also asked the Ukrainian leader to work with his personal lawyer, Rudy Giuliani, and US Attorney General William Barr on the issue, the call transcript reveals.

The release of the transcript showing Trump repeatedly pressed the Ukrainian leader to investigate a political rival comes a day after House Speaker Nancy Pelosi declared the President had betrayed his oath of office and announced she is opening a formal impeachment inquiry.

Trump on Wednesday denied any wrongdoing, saying there was "no pressure whatsoever" in his phone call with Zelensky.

At an afternoon news conference in New York, the President added: "I didn't do it. There was no quid pro quo."

The rough transcript, which a senior White House official said was developed with assistance from voice recognition software along with note takers and experts listening, will likely amplify the Democratic impeachment effort.

"The fact is that the President of the United States, in breach of his constitutional responsibilities, has asked a foreign government to help him in his political campaign at the expense of our national security, as well as undermining the integrity of our elections," Pelosi said after the transcript was released Wednesday. "That cannot stand. He will be held accountable. No one is above the law."

House Intelligence Committee Chairman Adam Schiff told reporters Wednesday that the President's message to the Ukrainian President was clear, despite some debate over whether there was quid pro quo.

"There is no quid pro quo necessary to betray your country or your oath of office. Even though many read this as a quid pro quo. I'm not concerned whether it is a quid pro quo or not. Ukraine understood what this President wanted," the California Democrat said.

The July 25 call, which took place one day after former special counsel Robert Mueller testified before Congress about Russian interference in US elections, was also part of a whistleblower complaint submitted to the Intelligence Community Inspector General, a source familiar with the situation previously told CNN, a revelation that has only raised more questions in the ongoing controversy.

Giuliani has long lobbied Ukraine to investigate Biden's call in 2016 to remove the country's top prosecutor, who at one point had been investigating a Ukrainian natural gas company connected to Hunter Biden.

There is no evidence of wrongdoing by either Joe or Hunter Biden.

On the call, Zelensky agreed to the President's request.

"Since we have won the absolute majority in our Parliament, the next prosecutor general will be 100% my person, my candidate," the Ukrainian president said. He later added: "He or she will look into the situation specifically to the company that you mentioned in this issue. The issue of the investigation of the case is actually the issue of making sure to restore the honesty so we will take care of that and will work on the investigation of the case."

Wednesday, the Ukranian leader said he did not feel pressured.

"Nobody pushed me," Zelensky said in a joint appearance with Trump.

Trump said Wednesday evening that he's willing to release a transcript of another call with the Ukrainian president.

"I'll release that, too, if that's important to you," Trump said of a call which preceded the one the public learned more about Wednesday through a newly released transcript. "I spoke to him previous to the call that we released."

He reiterated that it was a "very innocent" call.

'I would like you to do us a favor'

Prior to mentioning Biden, Trump criticized Mueller's testimony from the day prior and raised the possibility of looking into the US cybersecurity firm CrowdStrike, which has been retained by Democrats and Republicans in recent years.

After getting hacked in 2016, the Democratic National Committee hired CrowdStrike to investigate the attacks. CrowdStrike publicly blamed the Russian government, which was later confirmed by Mueller's investigation.

Then, Zelensky mentioned that Ukraine is ready to buy more Javelin missiles from the US, prompting Trump's reply, "I would like you to do us a favor."

"I would like you to do us a favor though because our country has been through a lot and Ukraine knows a lot about it. I would like you to find out what happened with this whole situation with Ukraine, they say CrowdStrike ... I guess you have one of your wealthy people ... The server, they say Ukraine has it," Trump told Zelensky according to the transcript.

"There are a lot of things that went on, the whole situation. I think you're surrounding yourself with some of the same people. I would like to have the attorney general call you or your people and I would like you to get to the bottom of it," he added. "Whatever you can do, it's very important that you do it if that's possible."

There is no evidence Ukraine has the server Trump is referring to.

Trump also told Zelensky the US has been "very, very good" to Ukraine.

Zelensky agreed, and told Trump the US is a "much bigger partner" to Ukraine than other European countries regarding sanctions on Russia, adding that he planned to purchase more Javelin missiles from the United States.

The Justice Department also said Wednesday that it received a criminal referral from the Intelligence Community Inspector General in late August to investigate whether the President's push for Ukraine to investigate Biden was a violation of campaign finance law.

DOJ declined to bring a case because it found that asking the Ukrainians to investigate Biden was not something of monetary value, and therefore did not run afoul of campaign finance laws.

The Justice Department's examination centered on the July call. Prosecutors interviewed White House officials involved in producing the transcript to establish it was a reliable record of the call. No other interviews were done. The FBI received a separate referral from the inspector general but deferred to the DOJ criminal division which was doing its analysis, according to a senior Justice Department official.

Barr was also not recused from handling the issue despite the fact that his name comes up in Trump's call with Zelensky.

In the ICIG's assessment of the whistleblower complaint, they noted that "some indicia of an arguable political bias on the part of the complainant in favor of a rival political candidate." The ICIG still determined that the complaint was credible.

The Justice Department says Barr has not spoken with Trump, the Ukrainian government or Giuliani about the Biden issue.

"The attorney general was first notified of the President's conversation with Ukrainian President Zelensky several weeks after the call took place, when the Department of Justice learned of a potential referral. The President has not spoken with the Attorney General about having Ukraine investigate anything relating to former Vice President Biden or his son," Department of Justice Spokesperson Kerri Kupec said in a statement Wednesday.

The immediate reaction to the transcript from congressional lawmakers was largely split down party lines.

Top Democrats have concluded it showed clear evidence of Trump pressuring a foreign leader for political advantage. Republicans immediately insisted -- as has Trump -- that there was no explicit quid pro quo in the call -- an argument that is likely to form the centerpiece of the anti-impeachment case.

House Majority Leader Steny Hoyer told reporters that the transcript is "pretty damning, in terms of the President trying to put pressure on a foreign government to interfere in our elections or to get dirt on his opponent," though he would not say if it contained evidence Trump committed an impeachable offense.

Pelosi however, asserted that the transcript only highlights the need for a formal impeachment inquiry.

"The transcript and the Justice Department's acting in a rogue fashion in being complicit in the President's lawlessness confirm the need for an impeachment inquiry. Clearly, the Congress must act," she said in a statement.

"If this is the version of events the president's team thinks is most favorable, he is in very deep jeopardy," Warren tweeted.

The Trump 2020 campaign was quick to unleash its own offensive, and several Republicans immediately came to the President's defense.

Sen. Lindsey Graham, a South Carolina Republican, said Democrats would be "insane" to impeach Trump over a telephone call.

Iowa GOP Sen. Chuck Grassley echoed that sentiment, underlining how the political terrain over the months-long impeachment fight to come is already being drawn.

"I've read the transcript in its entirety. It shows that there was no quid pro quo," Grassley said.