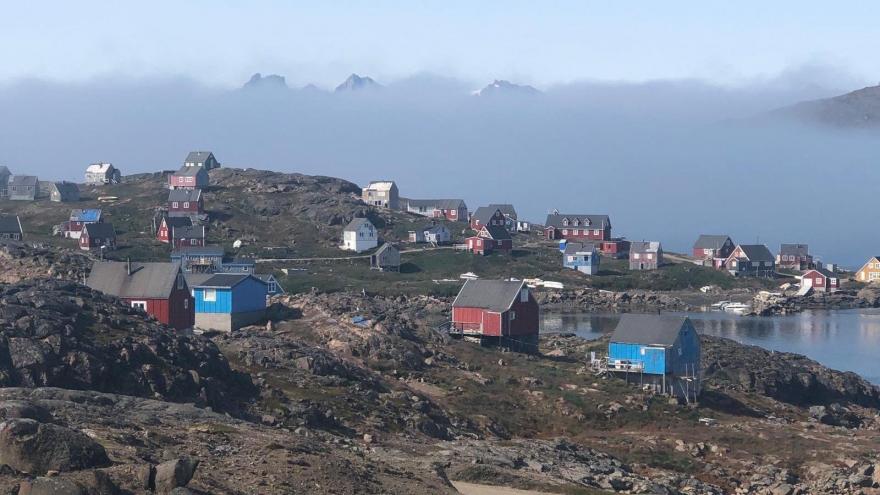 Less than two weeks before his scheduled trip to Denmark, President Donald Trump announced on Twitter that he has postponed his visit to Copenhagen after the Danish Prime Minister disputed his interest in buying Greenland as "absurd."

(CNN) -- Less than two weeks before his scheduled trip to Denmark, President Donald Trump announced on Twitter that he has postponed his visit to Copenhagen after the Danish Prime Minister disputed his interest in buying Greenland as "absurd."

"Denmark is a very special country with incredible people, but based on Prime Minister Mette Frederiksen's comments, that she would have no interest in discussing the purchase of Greenland, I will be postponing our meeting scheduled in two weeks for another time," he wrote Tuesday night.

He continued, "The Prime Minister was able to save a great deal of expense and effort for both the United States and Denmark by being so direct. I thank her for that and look forward to rescheduling sometime in the future!"

Frederiksen said Wednesday she received the news that Trump had postponed his trip to Denmark with "regret and surprise" and "had been looking forward to the visit."

She called the visit "an opportunity to celebrate Denmark's close relationship with the US who is one of Denmark's closest allies." She also reiterated many times that "this does not change the character of our good relations."

A White House official confirmed to CNN that the entire trip to Denmark is being scrapped. Frederiksen confirmed the White House sent a message to the Danish embassy overnight about the cancellation.

Trump has on multiple occasions brought up buying Greenland from the Danish government and the White House counsel's office has looked into the possibility, two sources told CNN last week.

On Sunday, Trump confirmed his interest in buying the country, telling reporters that Greenland is hurting Denmark. Frederiksen confirmed the White House set a message to the Danish embassy overnight about the cancellation.

"We are good allies with Denmark. We protect Denmark like we protect large portions of the world, and the concept came up," the President said in New Jersey before heading back to Washington. "Strategically it's interesting, and we would be interested, but we will talk with them a little bit."

"I strongly hope that this is not meant seriously," she said, calling the conversations "an absurd discussion."

Though it appears Trump's inquiries were serious, the President had made light of the reports, joking with a meme of the golden Trump International Hotel of Las Vegas photoshopped onto a seaside Greenland town and writing on Twitter, "I promise not to do this to Greenland!"

When Trump confirmed his interest in the Greenland purchase on Sunday, he had suggested his trip to Denmark was not related.

"We're going to Poland and then we may be going to Denmark -- not for this reason at all. But we're looking at it (purchasing Greenland). It's not number one on the burner," he told reporters.

Trump and first lady Melania Trump had accepted an invitation to visit Her Majesty Margrethe II, Queen of Denmark, and he had been expected to participate in a series of bilateral meetings and meet with business leaders, according to the White House.

It's unclear whether the postponement will affect his scheduled visit to Warsaw, Poland -- part of the same trip -- where he is to attend commemorative ceremonies and visit memorial sites for the 80th anniversary of the beginning of World War II.

Danish politicians reacted with incredulity to Trump's decision to postpone his visit to Copenhagen.

"For no reason Trump assumes that (an autonomous) part of our country is for sale. Then insultingly cancels visit that everybody was preparing for," the Conservative People's Party spokesman for Greenland, Rasmus Jarlov, said on Twitter. "Are parts of the US for sale? Alaska? Please show more respect."

"Is this some sort of joke? Deeply insulting to the people of Greenland and Denmark," former Danish Prime Minster Helle Thorning-Schmidt wrote on Twitter.

Morten Østergaard, the head of the Danish Social-Liberal Party, said on Twitter that it "shows why, more than ever, we should consider the EU countries our closest allies. The man is incalculable."