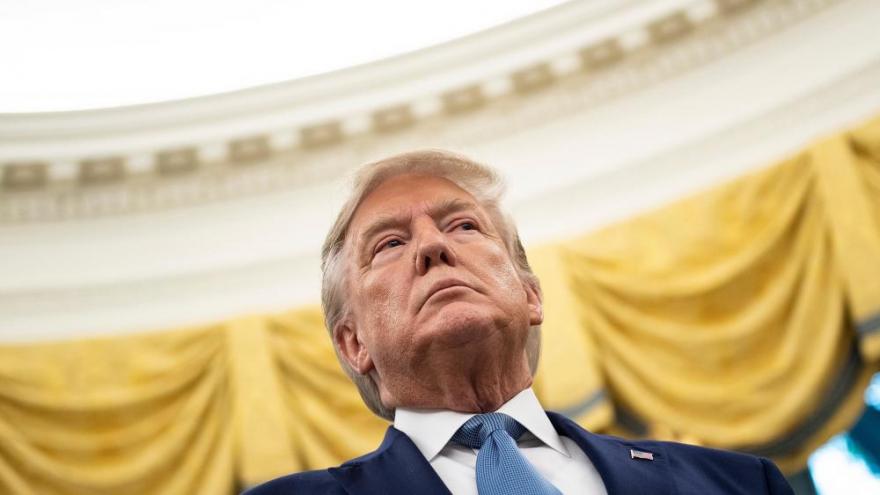 US President Donald Trump listens during a Presidential Medal of Freedom ceremony for Edwin Meese in the Oval Office at the White House in Washington, DC on October 8, 2019. (FILE)

(CNN) -- President Donald Trump will unveil Thursday new federal guidelines meant to begin the process of reopening the country, he announced from the Rose Garden, as subsets of the White House coronavirus task force weigh options on how to best advise Americans on returning to workplaces or schools.

Trump has conceded that final decisions on how and when to reopen parts of the economy will fall to individual governors, a reversal from his earlier stance the he held "absolutely authority" to reopen the economy. But he still plans to provide some guidelines and benchmarks to help advise states on easing social distancing measures in the coming days.

He said during Wednesday's briefing that he would unveil the guidelines a day later, citing promising developments in the battle against coronavirus.

"These encouraging developments have put us in a very strong position to finalize guidelines for states on reopening the country, which we'll be announcing. We're going to be talking about that tomorrow," he said. "It's very exciting."

Both men acknowledged that some states were further along in containing the virus than others, and Trump repeated his assertion that certain places may be able to reopen sooner than May 1.

The White House coronavirus response coordinator, Dr. Deborah Birx, said there were nine states with fewer than 1,000 cases. And Trump said he believed there could be nearly 30 states in "extremely good shape."

Officials said the new recommendations would mimic the social distancing guidelines the President announced in March and extended at the start of April: while not mandatory, they carry the weight of the federal government and the presidency.

The current federal guidelines on social distancing are not expected to be renewed when they expire on April 30. Officials said the White House would work closely with states to ensure reopening efforts are done safely and only when local outbreaks are deemed contained.

While the new plans have yet to be finalized, officials have discussed issuing guidance to states on how to best assess whether they are ready to move away from social distancing, including creating specific thresholds for a reduction in cases and hospital capacity that would trigger a change in status.

The new guidelines could also include a variety of options on how to reopen workplaces, including scaling up monitoring and recommending temperature checks; increasing the availability of testing, including antibody tests when they become available; new guidelines on how to best socially distance in workplaces, on public transportation and in public spaces like restaurants; and increased availability of masks or other face coverings.

Ahead of their unveiling, the new guidelines were still being solidified. But another idea being discussed is recommending people who have recovered from coronavirus or test positive during the antibodies test -- meaning they had coronavirus and likely have some form of immunity -- go back to work wearing masks.

Officials have also discussed recommendations for schools, child care centers and summer camps, recognizing that returning to work may be difficult for parents if their children don't also have a place to go.

Members of the task force who have been devising the new guidelines are expected to streamline their efforts before presenting Trump with final options.

According to sources inside the White House and others familiar with the discussions, there is now a belief it will be nearly impossible to move Trump away from the May 1 date for reopening the economy, though the President has conceded that different areas of the country will move at different paces.

While one senior administration official insisted May 1 remained a fluid date, sources familiar with the matter said in phone calls with allies the President has seemed "amped up," focusing on almost nothing but when and how badly the country needs to reopen the economy.

Because of the President's laser-like focus on May 1, people around him are helping identify ways to make the announcement he craves but to do it responsibly, according to a source familiar with the President's thinking and conversations.

States doing their own thing

Even with new federal guidelines, the patchwork of different state situations will make any nationwide return to normal unlikely, despite Trump's continued insistence on May 1 as the date of reopening.

Some states have already extended their own social distancing guidelines past May 1, and California Gov. Gavin Newsom, a Democrat, has already announced a six-point framework on reopening that includes expanding testing to identify and isolate the infected, maintaining vigilance to protect seniors and high risk individuals, and being able to meet future surges in hospitals.

While Trump has said each state will submit its own plan for reopening, the new guidelines are not likely to be state specific, officials said. Instead, the current thinking is to issue new, loosened federal guidelines and tell state leaders if their state is ready to adopt them, they should.

Trump indicated on Tuesday he would not apply pressure to states on reopening and was eying a phased reopening based on geography.

"We think that some of the governors will be in really good shape to open up even sooner than that. We'll speak to them. But we're all set and we're counting on the governors to do a great job," Trump said. "Others are going to have to take a longer period of time until they're in a position to say, 'We're ready to go.' And that's OK. We understand that. Some of the governors have a very tough situation."

There have been multiple conversations around how this could look. One idea floated by officials would be a focus on "cold spots" -- the cities or states where infection numbers are very low that should start to ease restrictions earlier.

The President suggested on Tuesday there could be up to 20 states with low enough rates of contagion that they could think about easing restrictions even before May 1.

White House officials had contemplated small, regional reopenings on May 1 that might not actually stimulate the national economy but would give the impression of moving forward, while still keeping up the mitigation in areas that needed it.

There has been a hope that with small regional reopenings in states such as Texas, Oklahoma and elsewhere would put some pressure on governors in surrounding states to take similar steps.

Elsewhere in the nation, however, states have begun to band together to enact regional reopenings. The Democratic governors of New York, New Jersey and Connecticut have announced a consortium on easing restrictions, and a similar effort has been undertaken by West Coast governors.

Trump indicated Tuesday he was comfortable if some states take more time than others.

"We have one country, but we have lots of different pieces. It's a puzzle. We have beautiful pieces, beautiful states with capable governors. They know when it's time to open," he said. "And we don't want to put pressure on anybody. I'm not going to put any pressure on any governor to open."