Trump pledges to send 'sheriffs' and 'law enforcement' to polling places on Election Day, but it's not clear he can 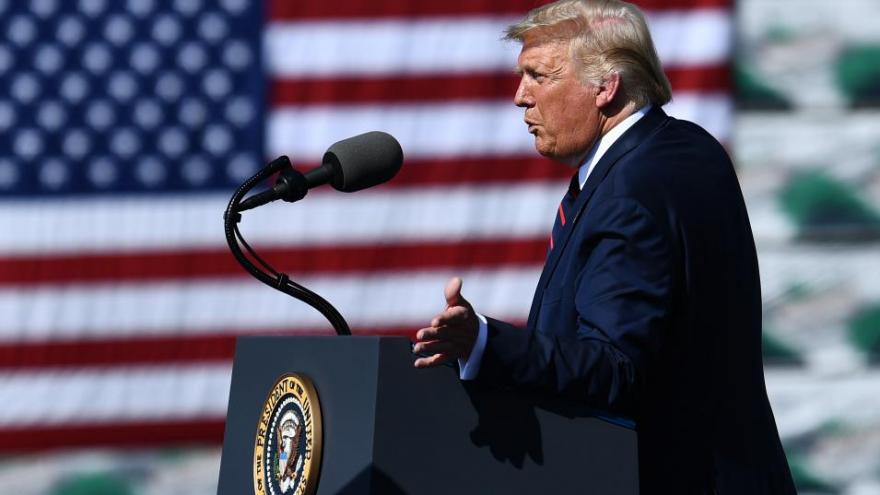 US President Donald Trump, here speaking in Old Forge, Pennsylvania, on August 20, 2020, on Thursday said he would send law enforcement officials to polling locations to guard against voter fraud in November's election.

(CNN) -- President Donald Trump on Thursday said he would send law enforcement officials to polling locations to guard against voter fraud in November's election, although it's not clear he has the authority to do so.

Trump's comments come as his campaign works to recruit tens of thousands of volunteers for what Republican officials have said could be their largest poll-watching operation. Even before Trump's comments, his party's plans to monitor the polls have sparked charges from Democrats and voting-rights groups that Republicans are gearing up to suppress voting in key states.

The President has repeatedly claimed, without evidence, that voter fraud will undermine November's election results.

Federal law prohibits intimidation at the polls and makes it illegal for any "civil" or "military" federal officer to order "troops or armed men" to polling places, unless needed to "repel armed enemies of the United States."

Trump also has no authority to deploy local law enforcement officials to monitor elections, although his campaign could hire off-duty police to work the polls, said Rick Hasen, an election law expert at the University of California at Irvine.

If Trump did so, it likely would trigger legal action from Democrats, who would claim the move amounted to a voter-suppression tactic. And it would have echoes of a case that resulted in a federal court decree that for decades sharply restricted the Republican National Committee's "ballot security" work without prior judicial approval.

The 1982 decree arose from a Democratic National Committee lawsuit that accused the RNC of trying to suppress votes in New Jersey by, among other things, posting armed, off-duty police officers at the polls in Black and Latino neighborhoods. The decree expired in 2018, and this election marks the first presidential contest since 1980 that the GOP presidential nominee and the RNC will work together on poll-watching.

Marc Elias, an election lawyer at the forefront of Democrat lawsuits on voting, hinted at legal action if Trump proceeds.

"Not without a legal fight he won't!" Elias tweeted in response to Trump's comments.

On Friday, Kristen Clarke, who oversees the Lawyers' Committee for Civil Rights Under Law, called Trump's pledge "an old and familiar tactic pulled right from the Jim Crow playbook and often specifically targeted at Black voters and voters of color."

She said her group would "use every tool in our arsenal to block thinly veiled efforts aimed at discouraging participation by eligible voters this election season."

Poll-watching is a common practice, and both parties use it. Observers monitor how ballots are cast, the testing of equipment and counting procedures -- looking for irregularities. They also can challenge the eligibility of individual voters.