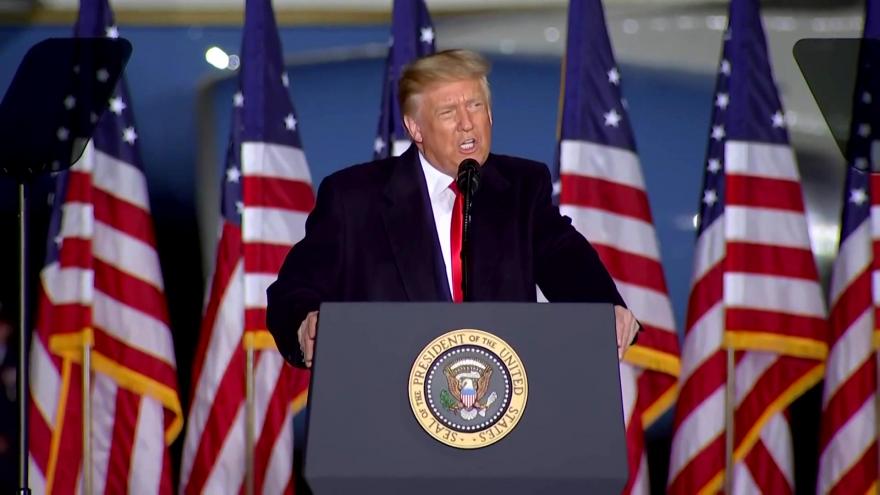 Trump supporters participate in a rally on Wednesday, Jan. 6, 2021 in Washington, DC, which turned into a riot as people stormed the US Capitol building.

(CNN) -- President Donald Trump conceded publicly for the first time Thursday that he will not serve a second term, stopping short of congratulating President-elect Joe Biden but acknowledging a transfer of power is now underway.

It appeared to end, for now, Trump's false and corrosive attempt to overthrow the election results, which culminated in a violent attempt at insurrection at the US Capitol a day earlier. It did not reckon with Trump's role in fomenting that violence, nor did it contain a vow to change his behavior.

But with 13 days until Biden is inaugurated, the President's comments in a prerecorded video amounted to as much of a concession as he is likely to offer before he departs the White House for good.

"A new administration will be inaugurated on January 20," Trump said in the video, which was taped at the White House. "My focus now turns to ensuring a smooth, orderly and seamless transition of power."

A White House adviser in discussions with senior officials said Trump recorded the video only because his presidency is threatened by looming resignations and potential impeachment.

"I think that video was done only because almost all his senior staff was about to resign, and impeachment is imminent," the adviser said.

"That message and tone should have been relayed election night ... not after people died," the adviser added.

Trump's recognition of his loss comes two months after the fact and amid growing calls for either his removal from office or a fresh impeachment. It also came as legal questions swirled about his culpability for inciting rioters who invaded the US Capitol a day earlier.

In the video, released more than 24 hours after Wednesday's riot, Trump called for "healing and reconciliation" and said the country must move forward.

But he also misstated his role in activating the National Guard to combat his supporters who stormed the Capitol, who only a day earlier he had called "very special."

Delivered in monotone and read from a teleprompter, Trump's remarks bore little resemblance to those in the Wednesday spot, in which he told his rioting supporters, "We love you."

That video, had been taped in the Rose Garden, was more ad-libbed and did not accomplish what many of his advisers had hoped, which was to tamp down the violence and accusations the President had incited it.

Thursday's video was more staid, taped indoors and appeared heavily edited. Trump demonstrated little emotion as he admitted his time as president was nearing its end.

"Serving as your president has been the honor of my lifetime," he said flatly. "And to all of my wonderful supporters, I know you are disappointed. But I also want you to know that our incredible journey is only just beginning."

Throughout Wednesday evening and into Thursday, Trump faced resignations from senior staffers and sped-up efforts among Democrats interested in filing new articles of impeachment.

Talk of invoking the 25th Amendment also appeared to escalate, though Vice President Mike Pence — whose participation in such an effort would be required — has not discussed the matter with members of the Cabinet. Trump also appeared to be confronting potential legal questions about his role in inciting the riots.

Those factors seemed to contribute to a starkly different approach from Trump, who in the Thursday video condemned the protests in far stronger terms than he did on Wednesday.

"The demonstrators who infiltrated the Capitol have defiled the seat of American democracy," he said. "To those that engage in the acts of violence and disruption, you do not represent our country. To those that broke the law, you will pay."

Still, he did not address his own role in fomenting the unrest and continued to make claims, however vague, that the 2020 presidential election was marred by fraud.

Earlier Thursday, Trump had issued a dark-of-night statement vowing an "orderly transition," which came about in part to stanch a wave of resignations from within the West Wing and the broader administration, according to a person familiar with the matter.

The resignations began Wednesday with the first lady's chief of staff, the White House social secretary, a deputy press secretary and Trump's deputy national security adviser all exiting before the night's end. Other officials, sources told CNN, had been considering resigning. And a growing number of Republican leaders and Cabinet members told CNN on Wednesday that they were considering having Trump removed from office by impeachment or through the invocation of the 25th Amendment.

But at least one person who was believed Wednesday to be considering resigning is now planning to remain in the administration. National security adviser Robert O'Brien has told aides he now intends to remain in his post until Trump leaves office, though his plans could still change depending on how Trump approaches the day. He made his decision before Trump released the statement.

O'Brien was persuaded to stay by other senior staffers, who expressed concern about the national security implications of a vacant post in the final days of the administration.

The statement from the President, released through his deputy chief of staff Dan Scavino's Twitter account at 3:50 a.m. ET, said "there will be an orderly transition on January 20" even though he disagreed with the outcome of the election.

Trump agreed to the statement after being advised of the dismay and disgust among many of his aides, though the person familiar said it was not the sole reason for its release. It also came after reports that early discussions were underway about invoking the 25th Amendment and restarting impeachment proceedings.

"Even though I totally disagree with the outcome of the election, and the facts bear me out, nevertheless there will be an orderly transition on January 20," Trump said in a statement after Congress certified his loss. "I have always said we would continue our fight to ensure that only legal votes were counted. While this represents the end of the greatest first term in presidential history, it's only the beginning of our fight to Make America Great Again."

It was meant as a signal from Trump that the next 13 days will proceed without incident. But it came months after Joe Biden won the election and hours after Trump urged his supporters to protest at the Capitol. Even among his team and close allies it is viewed as coming far too late and offering far too little condemnation for what happened at the Capitol building.

Trump, who has repeatedly refused to concede the election, on Wednesday egged on his supporters who would later breach the US Capitol in an attempt to stop lawmakers from counting the electoral votes cast in the 2020 presidential election.

"We're going to walk down to the Capitol. And we're gonna cheer on our brave senators and congressmen and women. And we're probably not going to be cheering, so much for some of them, because you'll never take back our country with weakness, you have to show strength and you have to be strong," Trump said, addressing his supporters who gathered maskless on the Ellipse near the White House Wednesday morning.

After a speech filled with lies and misrepresentations that incensed the crowd, Trump returned to the White House to watch a violent crescendo to his constant spreading of misinformation about the electoral process. The mob broke into the Capitol, stormed both the House and Senate floors and Trump supporters could be seen lounging in House Speaker Nancy Pelosi's office.

A woman was shot and killed in the chaos. Police have yet to release more details about her death. Three others had medical emergencies and died, according to police.

Republicans and Democrats alike condemned the rioters for entering the country's legislative chambers and destroying federal property, and several lawmakers blamed Trump for the violence that broke out.

In remarks Wednesday afternoon, Biden called on Trump to appear on national television "to fulfill his oath and defend the Constitution and demand an end to this siege."

Multiple people told CNN that Trump was borderline enthusiastic over the protests and did not wish to condemn them. He only agreed to record a short video after multiple staffers and Republican lawmakers lobbied him to make a statement.

On Wednesday night, once the Capitol was secured again, lawmakers returned from lockdown to the House and Senate chambers, to continue counting the votes nearly six hours after the crowd wreaked havoc on America's symbol of democracy.

The House and Senate defeated Republican objections lodged against the votes sent by two states, Arizona and Pennsylvania. Before 4 a.m. ET, the joint session of Congress had completed tallying up the electoral votes and Vice President Mike Pence, who presided over the count, declared that Biden won the Electoral College by 306 votes to 232 for Trump.

Trump did not say in either statement whether he plans to attend the inauguration of Biden and Vice President-elect Kamala Harris on January 20.