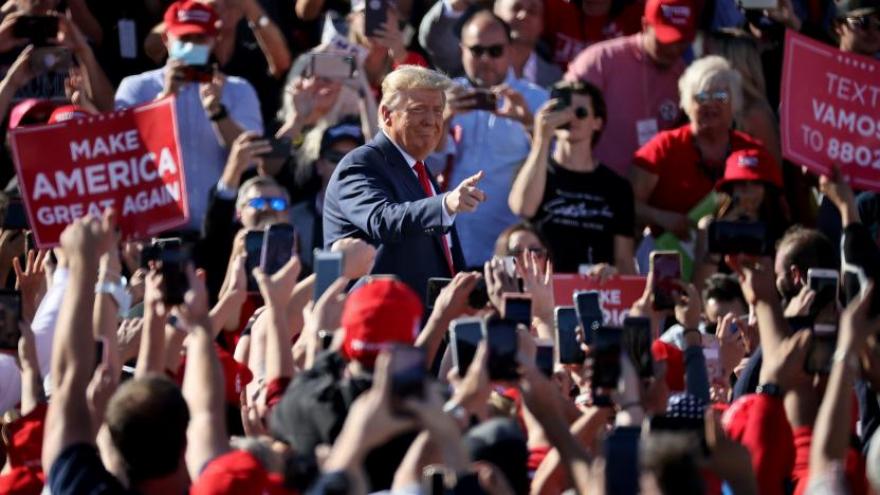 "Over the next four years, the American Dream Plan will bring more than 2 million new jobs to Hispanic communities, create over a half a million new Hispanic-owned small businesses -- which will end up being large businesses if I know you, and I know you well," Trump said in Goodyear, Arizona.

The President also said the plan would "expand opportunities for federal contracting" and would "increase access to capital by hundreds of billions of dollars."

The plan -- a White House document that the White House's press office deferred to the Trump campaign on for comment -- is a two-page, bullet-pointed summary of ambitious but largely general goals, ranging from the economy to education to immigration.

Among the goals: to "instill policies to add 500,000 Hispanic-owned businesses," "empower every family in America with school choice now" and "streamline the process to increase the number of Hispanic Serving Institutions."

The Trump campaign painted the plan as one "fulfilling the promises of America that bring so many people to our shores, including a thriving economy, educational opportunity, freedom, and community."

But many of the plan's goals are consistent with what Trump has said he is already accomplishing in office or wants to accomplish with a second term. At least one goal, to "resolve Deferred Action for Childhood Arrivals (DACA) with a permanent solution," is something the President has promised for years.

Roughly 32 million Hispanics are expected to be eligible to vote in 2020, making them the largest minority group in US presidential election history. And while Latino voters have generally tended to lean more Democratic, there are signs that Trump is gaining ground among Hispanic voters in key states such as Florida. Polls have shown Trump has garnered increased support from Hispanics over the last four years, and Joe Biden appears to be trailing in Hispanic support compared with his predecessor, 2016 Democratic presidential nominee Hillary Clinton.

When Trump stepped onto the national political stage in 2015 he denigrated Mexicans coming to the US as criminals and rapists, kicking off a hallmark of his political rhetoric for years to come.

Trump's anti-immigrant rhetoric and policies have continued throughout his presidency. And the highest tier of Trump's advisers, his Cabinet, has just one Hispanic at the table.

But some of the President's tactics, like his administration's hard stance with Cuba and Venezuela's Nicolás Maduro, appear to resonate with some Hispanic voters who have fled communist regimes for America.

The "Platinum Plan" also included some new proposals, such as making lynching a national hate crime, recognizing Juneteenth as a national holiday and prosecuting the Ku Klux Klan and antifa as terrorist organizations.