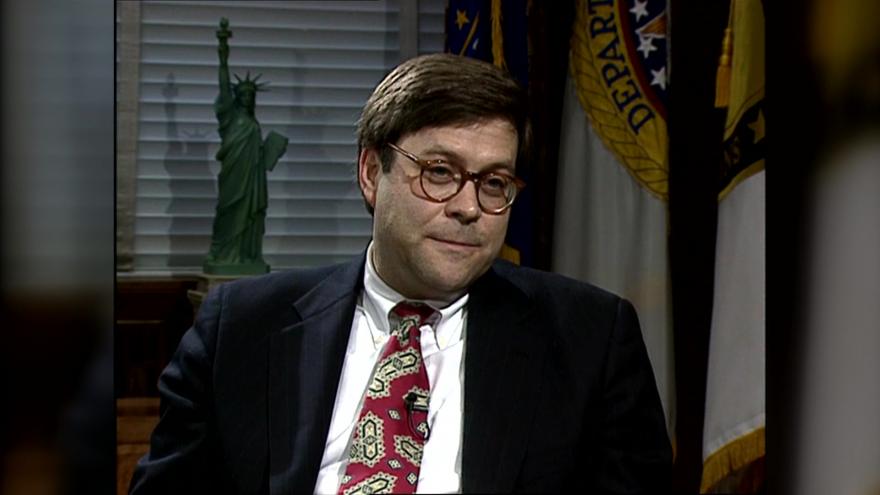 WASHINGTON (AP) — President Donald Trump on Friday picked former Attorney General William Barr to once again serve as America's top law enforcement official. But while his experience and mainstream background may boost his prospects for confirmation, Democrats are raising alarms about his comments on the Russia investigation and Hillary Clinton.

Barr has expressed concerns about political donations made by prosecutors on special counsel Robert Mueller's team and has supported calls for an investigation into a uranium deal approved while Clinton was secretary of state, a pet issue of Trump supporters.

It's not clear whether Barr, if confirmed, would take office in time to shape the Mueller investigation, which has shown signs of being in its final stages. But even if it wraps up before he takes office, Barr would be in a position to influence prosecutions stemming from the probe, as well as deal with other politically sensitive cases, such as responding to referrals from the House's new Democratic majority.

Barr, 68, would succeed former Attorney General Jeff Sessions, whom Trump forced out after constant heckling because he had stepped aside from overseeing the Russia investigation. Sessions' chief of staff, Matthew Whitaker, was elevated to acting attorney general and took control of Mueller's investigation.

Barr's confirmation would create uncertainty about the future of Rod Rosenstein, the deputy attorney general who oversaw the Mueller investigation before Whitaker's appointment. Frequently, new deputies are also appointed when there's a new attorney general.

Barr's appointment could bring more stability to the Justice Department. Sessions' tenure was marked by the incessant attacks from Trump, and Whitaker's elevation was also controversial. Questions were raised about Whitaker's credentials, critical comments he had made about the Mueller investigation before joining the Justice Department and his involvement with a company that was accused of misleading consumers and is under investigation by the FBI.

Barr was attorney general between 1991 and 1993 at the same time Mueller oversaw the department's criminal division. Barr later worked as a corporate general counsel and is currently of counsel at a prominent international law firm, Kirkland & Ellis LLP.

Trump called Barr "one of the most respected jurists in the country."

"During his tenure, he demonstrated an unwavering adherence to the rule of law," Trump said. "There's no one more capable or qualified for this role."

Confirmation hearings are unlikely before January, when Republicans will have a 53-47 majority, leaving Democrats powerless to block the nomination unless four Republicans break ranks.

The next chairman of the Judiciary Committee, Sen. Lindsey Graham, R-S.C., called Barr's pick an "outstanding decision" and pledged to "do everything in my power" to quickly push the nomination through the committee and onto the Senate floor for confirmation.

But the Senate's top Democrat, Chuck Schumer, said Barr must promise that Mueller's investigation can proceed unimpeded and that Mueller's final report will be made available to Congress and the public immediately after it is completed.

In November 2017, Barr told the New York Times that there was more basis to investigate the uranium deal approved while Clinton led the State Department than potential collusion between Russia and the Trump campaign.

"To the extent it is not pursuing these matters, the department is abdicating its responsibility," Barr said.

In a May 2017 op-ed for The Washington Post, Barr defended Trump's decision to fire FBI Director James Comey, an action Mueller has been examining for possible obstruction of justice. He was quoted two months later in a Post story as expressing concern that members of Mueller's team had contributed to Democratic candidates.

"In my view, prosecutors who make political contributions are identifying fairly strongly with a political party," Barr said. "I would have liked to see him have more balance on this group."

In an episode that may hold parallels to the current special counsel investigation, Barr was attorney general when Bush on Christmas Eve 1992 pardoned six former Reagan administration officials — including former Defense Secretary Caspar Weinberger — in the Iran-Contra scandal.

Barr said in a 2001 University of Virginia oral history interview that he supported the pardons.

"I certainly did not oppose any of them," Barr said. "I favored the broadest— There were some people arguing just for Weinberger, and I said, 'No, in for a penny, in for a pound.'"

Those who worked with Barr previously were quick to tout Barr's qualifications.

"I think the president has chosen a superb nominee who is precisely what the Department of Justice needs now, which is a steady hand," said Joseph diGenova, a Trump supporter and former U.S. attorney.

Paul McNulty, who worked at the Justice Department under Barr and a decade later became deputy attorney general, recalled him as decisive on the need for a strong federal response after the riots in Los Angeles following the acquittals on state charges of police officers involved in the Rodney King beating. He praised Barr's "boldness and thoughtfulness" in sending in the FBI to deal with a 1991 Alabama prison riot involving dozens of Cuban detainees.

Barr, who was acting attorney general at the time of the Talladega prison riots, has said he overruled a Bureau of Prisons plan to respond and instead directed the FBI to go in, telling officials there'd be no concessions and to prepare for a hostage rescue situation.

McNulty, now president of Pennsylvania's Grove City College, said Barr "has an extraordinary strategic mind so that as he thinks through the issues factually, he has a remarkable ability to then think about steps forward — what plan of action makes the most sense in light of these facts and these circumstances."