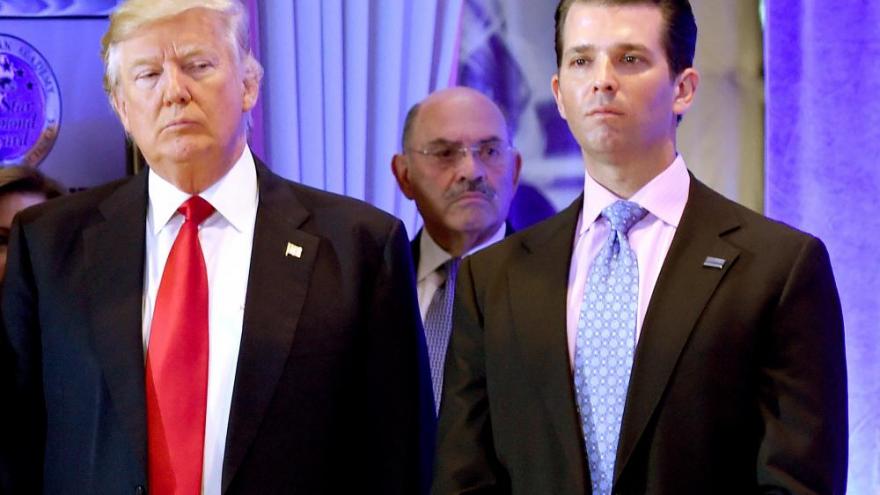 (CNN) -- A Manhattan grand jury on Wednesday indicted the Trump Organization and its chief financial officer, Allen Weisselberg, according to people familiar with the matter.

The charges, which people familiar with the matter told CNN earlier Wednesday are related to alleged tax crimes in connection with an array of perks and benefits awarded to employees, are expected to be unsealed Thursday. It was not immediately clear how many charges are in the indictments.

Though former President Donald Trump faced multiple federal and state prosecutorial inquiries during his administration, the district attorney's indictment would be the first to charge his namesake company with criminal conduct.

Trump himself isn't expected to be charged, his lawyer has said.

Weisselberg is expected to turn himself into prosecutors Thursday morning, two sources with knowledge told CNN.

The expected charges are set to come after lawyers for the Trump Organization met twice with prosecutors in recent days to present arguments about why the company shouldn't face criminal charges.

And they will come after more than two years of investigation that began with an inquiry into accounting connected to hush-money payments made by former Trump lawyer Michael Cohen and expanded to include questions about whether the company or certain employees paid taxes on benefits including rent-free apartments, car leases or private school tuition.

Prosecutors have also scrutinized cash bonuses paid to employees and whether appropriate taxes were paid on them, CNN reported Wednesday.

Though prosecutors have focused on Weisselberg in an effort to coax him into cooperating with their investigation, his lawyers recently informed the district attorney's office that he would not cooperate, people familiar with the matter said.

An indictment against him would likely significantly increase the pressure on him to comply with prosecutors' demands.

However, a source familiar with the matter says the pressure on Weisselberg has not been successful for a reason.

"Consider the possibility that Allen has nothing to flip on," the source said.

Investigators' scrutiny of Weisselberg began late last year, as prosecutors gathered evidence on him with the assistance of his former daughter-in-law, Jennifer Weisselberg. Since then, she has turned over boxes of financial records and has met with investigators multiple times, her lawyer Duncan Levin told CNN.

On Wednesday, Levin said she was pleased to learn of forthcoming charges against her former father-in-law and his longtime employer.

"We have been working with prosecutors for many months now as part of this tax and financial investigation and have provided a large volume of evidence that allowed them to bring these charges," Levin said. "We are gratified to hear that the DA's office is moving forward with a criminal case."

In recent weeks, as prosecutors have inched closer to bringing charges, Trump has lashed out at their inquiries, deriding the probe -- led by Vance and New York state Attorney General Letitia James, both Democrats -- as conducted by "radical left" officials.

"Having politically motivated prosecutors, people who actually got elected because they will 'get Donald Trump,' is a very dangerous thing for our Country," he said in a statement earlier this week. "Why would anyone bring their company to New York, or even stay in New York, knowing these Radical Left Democrats would willingly target their company if viewed as a political opponent? It is devastating for New York!"

This story has been updated with additional reporting Wednesday.