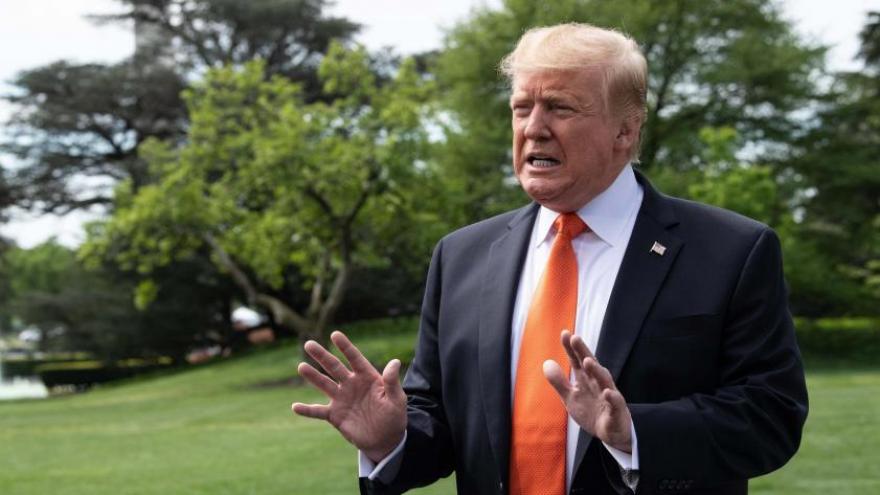 President Donald Trump weighed in on the recent measles outbreak in the United States, appearing to do an about-face on his previous claims linking child vaccinations to autism.

(CNN) -- President Donald Trump weighed in on the recent measles outbreak in the United States, appearing to do an about-face on his previous claims linking child vaccinations to autism.

Measles cases in the United States have surpassed the highest number on record since the disease was declared eliminated nationwide in 2000.

As of Monday, the US Centers for Disease Control and Prevention reported 626 individual cases of measles confirmed in those 22 states. This includes illnesses reported by state health departments to the CDC through April 19 and therefore does not include cases reported since then. On Wednesday morning a CNN analysis of data from state and local health departments put the total number of cases at 681 across 22 states.

Wednesday evening, the CDC confirmed the milestone. In a statement the agency said that as of 3 p.m., it counted 695 cases of the illness this year.

A UNICEF study found that measles deaths were up by 22% in 2017, and complacency and fear of vaccines were among the factors leading to less vaccinations.

A recently published study tracking the health of over 650,000 children found that the MMR vaccine did not increase the risk of autism in children who were not considered at risk for the disorder and did not trigger it in those who were.

Though the Centers for Disease Control and Prevention has declared that there is no link between vaccines and autism, Trump has publicly stated over the past decade that he's skeptical of child vaccinations.

During a 2015 Republican primary presidential debate on CNN, Trump told CNN's Jake Tapper that he was in favor of "smaller doses (of vaccinations) over a longer period of time."

"Autism has become an epidemic. Twenty-five years ago, 35 years ago, you look at the statistics, not even close. It has gotten totally out of control. I am totally in favor of vaccines. But I want smaller doses over a longer period of time," Trump said.

"Because you take a baby in -- and I've seen it -- and I've seen it, and I had my children taken care of over a long period of time, over a two- or three-year period of time. Same exact amount, but you take this little beautiful baby, and you pump -- I mean, it looks just like it's meant for a horse, not for a child, and we've had so many instances, people that work for me."

Trump first weighed in on the issue on Twitter in 2012.

"Massive combined inoculations to small children is the cause for big increase in autism," he claimed.

He made a similar argument in 2014, tweeting, "Healthy young child goes to doctor, gets pumped with massive shot of many vaccines, doesn't feel good and changes - AUTISM. Many such cases!"

Vaccination skeptics have been associated with Trump's presidential campaign and his administration.

In 2018, a top Veterans Affairs Department appointee named Thayer Verschoor came under fire for spreading conspiracy theories. Among one of his social media posts, he shared a list of 35 reasons to vote for Trump, which included Trump "warning" America of the "dangers" of vaccines.

Darla Shine, the wife of former White House communications chief Bill Shine, has espoused anti-vaccine views for years. While Bill Shine was in the White House, Darla Shine called for bringing back childhood diseases, such as measles, which she claimed boosted immunity and "keep you healthy & fight cancer."

During the presidential transition in 2017, Trump met with Robert Kennedy Jr., a vaccine skeptic. Kennedy told reporters that Trump asked him to lead a commission on "vaccination safety and scientific integrity." However, Trump's team denied that they appointed Kennedy to lead the charge. By February 2017, Kennedy told press that talks had dissipated.