President Trump now says not all vaping is bad 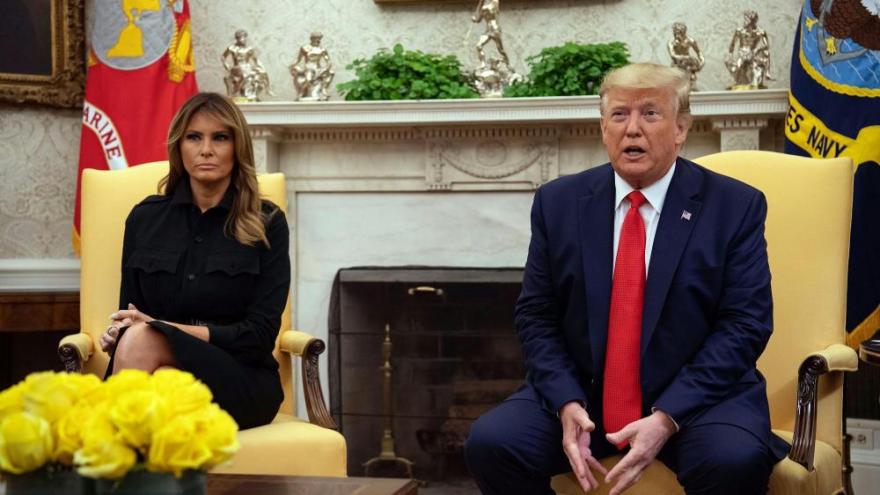 President Donald Trump seemed to strike a different tone on vaping in a tweet after announcing earlier in the week an effort to ban almost all flavored vaping products.

(CNN) -- President Donald Trump seemed to strike a different tone on vaping in a tweet Friday evening after announcing earlier in the week an effort to ban almost all flavored vaping products.

"While I like the Vaping alternative to Cigarettes, we need to make sure this alternative is SAFE for ALL!" the President tweeted. "Let's get counterfeits off the market, and keep young children from Vaping!" he added, the first time he has mentioned counterfeit products.

The tweet represents another instance of the President stepping back from a firm policy stance, as evidenced recently by his maneuvering on gun control policy. In that instance, Trump initially vowed action on background checks following mass shootings in El Paso, Texas, and Dayton, Ohio, but then softened his support for new policies following conversations with the National Rifle Association and eventually receded into vague statements about next steps.

A similar trend could be starting to play out regarding vaping, which Trump came out strongly against earlier this week.

The President said Wednesday that the US Food and Drug Administration would be putting out "some very strong recommendations" regarding the use of flavored e-cigarettes in "a couple of weeks."

Health and Human Services Secretary Alex Azar -- seated in the Oval Office with the President, first lady Melania Trump and the acting commissioner of the FDA -- announced that newly proposed enforcement policy would require flavored e-cigarette companies to take their products off the market.

"It'll take several weeks for us to put out the final guidance that will announce all the parameters around the enforcement policy, and then there will likely be about a 30-day delay to effective date, as is customary," Azar said.

But "at that point all flavored e-cigarettes other than tobacco flavor would have to be removed from the market," the secretary said.

By May 20, he said, e-cigarette companies making tobacco-flavored products would have the chance to file for approval by the FDA. At that time, flavored-product manufacturers would also have the opportunity to file, but their products would be off the market until approved.

It's unclear what effect Trump's Friday shift could play on those plans, given that counterfeit products were not mentioned during that Oval Office briefing.

The first lady, whose "Be Best" platform focuses in part on children's health and combating addiction, has spoken out more than once over her concerns about e-cigarette use by children.

Two former administration officials departed the White House to work for Juul, a popular electronic cigarette company. A third works with the company as a consultant.

On Thursday evening, the Centers for Disease Control and Prevention updated the way it is reporting case counts across the United States. The agency says it is now aware of 380 confirmed and probable cases of lung disease associate with e-cigarette use across 36 states. It is no longer reporting possible cases or cases under investigation.